The time to fight the battle of ideas is now

Under the Abbott Government, we’ve seen a tectonic shift to the right in response to gains made by the social movements in the 1970s that delivered universal healthcare and public education. Polo Guilbert-Wright urges progressive forces to take up the cudgel and fight back.

FOR TOO long, the progressive centre-left movement has lost the battle of ideas to the right. For the past 40 years we have ceded to them only to find ourselves reclaiming at the edges.

Collectively, the progressive movement needs to be militant in our fight for a just society that champions equality, community values and internationalism. Not one that is a mean spirited and individualist as the current Abbott government is proving to be.

Currently, we are facing a tipping point in Australian politics — what Malcolm Gladwell defines as:

‘... that magic moment when an idea, trend, or social behaviour crosses a threshold, tips, and spreads like wildfire.'

The crisis has been in the making since the Menzies era. If we don’t fight now, the conservative agenda will prevail in a manner that will change the identifying fairness of our society forever.

That means fighting for public education and universal healthcare before the user-pay model tips us over the edge and people start saying:

“Why do I pay taxes or a levy for education and health?” 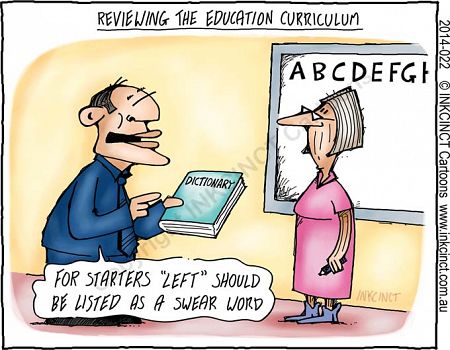 It means fighting for a more equitable distribution of public spending. Young people should be given every opportunity to become the best they can and not deprived of unemployment benefits for 6 months, nor should they be painted as leaners.

It means demanding the Abbott government tackle the tax concessions for superannuation which is costing Australians about $40 billion a year and which goes to the wealthiest five per cent of Australians.

It means fighting against the $7 co-payment and highlighting that we already pay for the privilege of universal healthcare through a Medicare levy in our taxes.

It is already starting to happen. People are coming together in ever larger numbers to protest against the Abbott government. Later this month, a national day of action will be held across the country. It hasn’t been since Work Choices that we’ve seen people taking up the fight in growing numbers. 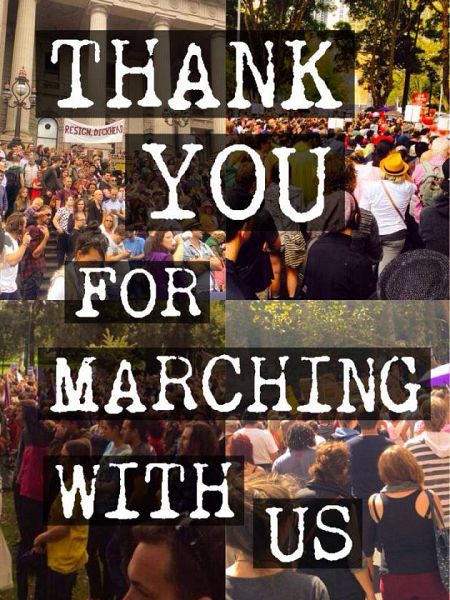 We know the conservative side of politics is well supported by right-wing think tanks providing them with policy ammunition.

The UK under Margaret Thatcher saw the ascendancy of right-wing, libertarian, free-market think-tanks like the Adam Smith Institute and the Institute of Economic Affairs.

Across the Atlantic, Ronald Reagan’s administration was heavily influenced by the likes of the Heritage Foundation and American Enterprise Institute.

Today, Australia is led by the most conservative prime minister in a generation and behind him stands the Institute of Public Affairs (IPA), the backbone of his policy agenda.

Andrew Crook writing for Crikey highlighted some of the Tea-Party-esque policies that the IPA is proposing that have been endorsed by the Coalition government. Some have already been acted upon, for example:

It’s an impressive result after less than 12 months of the Abbott government. They do it with such militancy and unapologetically so.

I maintain IPA is Tea Party ("Lib") policy formation unit. Look at how much of 100-pt list has been adopted; it also influenced CommAudit.

“Militant” in our ideas shouldn’t be a dirty word

As well as having the ideas, we need the confidence and militancy to prosecute them.

Recently, Harry Lombardo, the International President of the Transport Workers’ Union of America, defended the use of the word “militant”.

Arguing that it was not a dirty word, he said:

‘Management is militant. Our political enemies in government from town- ships, to big cities, to State Legislators, to Congress, are certainly militant. We have to be as well. Not irresponsible, not crazy, not strike happy, but a union that is able and willing to dig in and fight back…’

And you’d be hard pressed to argue that this Abbott government wasn’t militant in its ideology. If they get it, why don’t we?

The Liberal Party is unashamedly militant in its agenda to change Australia into a mean-spirited, individualist, market-driven society. They try to cloak it with slogans such as ending the ‘age of entitlement’ and ‘budget emergency’.

Whether it’s the IPA, employer associations like the Australian Industry Group, conservative columnist Gerard Henderson, current Liberal backbenchers like Kelly Dwyer or former Liberal Ministers like Peter Reith, the conservative agenda has its spokespersons in spades.

Warning for Abbott over sacking of Alan Moran by #IPA. His unsavoury extremist views align with many LNP MPs! http://t.co/E5ippmI6E0 #auspol

The progressive movement plays a secondary role in this environment.

It is time for the progressive centre-left movement to wrestle the ideas back and to engage in the hand-to-hand struggle of policy debate. It means our like-minded think tanks need to be more militant and partisan to the Labor Party.

In the UK after Neil Kinnock lost the 1992 UK general election, the centre-left think tank, the Institute for Public Policy Research (IPPR) played a central role in developing the factory of ideas that reinvigorated a future Labour government.

The IPPR led the groundbreaking Commission on Social Justice, which helped to revitalise centre-left thinking and lay the groundwork for Labour’s election victory in 1997.

Groups like The Australia Institute, the Centre for Policy Development, Per Capita and the McKell Institute have produced some exceptional work in recent years but they tend to work on the basis of putatively apolitical data.

The Chifley Research Centre is the Labor Party’s official think tank. It hasn’t produced much in terms of policy papers in recent years but it’s pleasing to hear that under current Executive Director, Michael Cooney, this is about to change. It would be deeply satisfying to see it become the IPPR of policy ideas for the Australian Labor Party.

If Gonski and the ‘education revolution’ had been developed by progressive think tanks in the years before the 2007 election victory, it would have had an easier implementation and greater chance of success. This would have given Labor six years to implement and be an effective campaign issue in 2010 and 2013.

Instead, Julia Gillard did her best trying to sign up Coalition State governments in the dying days of government. What we’ve seen by the Abbott Government’s decision to abandon the fifth and sixth year of funding is an undignified end to a truly great Labor reform.

We need progressive thinkers who can articulate an evidence-based approach to issues to counter the conservative dominance in the public arena.

It is important to identify academics who are capable of interacting with policy makers. There is scope for evidence to influence policy making while parties are in opposition.

The Labor Party and the parliamentary team needs to use this time in opposition to invest in developing a Labor agenda so we can be ready to campaign for a truly different vision of Australia.

The ALP National Policy Forum has a critical role to play in identifying policies that Labor can develop as part of the next manifesto we take to the Australian voters in 2016.

We need a better coordination of our ‘friendly’ think tanks – the Australia Institute, Per Capita, McKell, Chifley – arguing and developing policies for the next Labor government.

We need quality research and analysis, not policy developed on the run. We have progressive thinkers in our universities, in our trade unions, in research institutions and in private companies. We need to give them the opportunity to find their voice and call on our friends to help.

We need to finance, support and encourage our like-minded think tanks to create the alternative policy ideas. Do we need to consider pooling our funds in partnership with think tanks?

Such a struggle won’t be won overnight, but if we start now we will see the fruits of our labour in five years. We need to invest in ideas and the organisations that generate them. We need to invest in progressive think tanks so our politicians have the ideas and agenda to deliver the next Gonski, or Medicare or compulsory superannuation.

The public is searching for a Labor Party that stands up for its convictions and shows the public that Abbott and co are fanatical ideologues that have more in common with the U.S. Tea Party than the guile of John Howard. For too long we have fought at the fringes, but now is the time to be partisan and unashamedly so.

The time to fight the battle of ideas is now

26 August 2014, 8:00am Under the Abbott Government, we’ve seen a tectonic shift to the right in response ...
Join the conversation
comments powered by Disqus
News updates