The shocking joke and the shock jocks

With some of PM Tony Abbott’s recent media appearances attracting worldwide ridicule, Rodney E. Lever says he needs to take some backward steps for all our sakes.

PRIME MINISTER TONY ABBOTT reveals a lot more about himself than he should when he hangs out with commercial radio shock jocks, rather than a media pack that asks too many hard questions for his liking and to whom he often gives evasive, dithering answers.

He performs at his best in radio interviews — perhaps because he is more comfortable exposing his weirder mental deliberations in the one-to-one atmosphere of a cosy radio studio.

With the worst of his recent behaviour ‒ his rude attack on Vladimir Putin ‒ now, to Australia’s embarrassment, being poured out to the world, Abbott needs to take some backward steps to avoid more ridicule.

It comes at the same time former Prime Minister Julia Gillard’s book, My Story, is reaching shelves and attracting comment.

Hate Preachers Tony Abbott and Alan Jones should be the first ones to leave country then. #auspol pic.twitter.com/jeIdPLRntX

Gillard pulls no punches in telling how Kevin Rudd had to be removed as prime minister and a Labor caucus majority demanded her to take over the leadership.

One of the better known radio shockers in Australia is Alan Jones, who drew the attention of the CNN network in the USA. Jones, whose audience usually consists of elderly retirees, is a twice failed Liberal Party candidate whose alleged lewd behaviour in men’s toilets brought attention from the police in London.

Abbott puts his foot in his mouth so frequently he leaves the voters to wonder if he really should be the prime minister of this country. It is worth remembering that he only got the job by a single vote in the Liberal Party caucus, ending Malcolm Turnbull’s short leadership.

The world of shock jocks in Australia has a history going back to the 1930s.

The first of them was Norman Banks on Melbourne’s 3AW.

Norman, whom I knew well, was a large and heavily opinionated man who was ready to demolish anyone else’s contradictory views. He was the first of Australia’s radio shock jocks, and probably the most intelligent. I cannot imagine Banks allowing Abbott to get away with some of the stupid gaffes, like his childish shirtfront threat against the president of Russia.

By the 1950s, Banks was one of the most popular figures in Victorian radio. It was the same era Graham Kennedy worked as a recording clerk at 3UZ — later to become the most famous television performer in Australia.

Norman Banks, who was also a football commentator, died in 1985.

He was certainly the broadcaster who became the model for today’s multiple range of shock jocks who like to dabble in politics but often have little understanding of the nature of good government.

The modern shock jocks were second only to the Murdoch newspapers in bringing down Julia Gillard and the Labor Party in 2013, handing government to the most incompetent and ignorant group of amateurs Australia has ever encountered.

Clearly, Tony Abbott has already become aware of the embarrassment the majority of voters in this country must feel in his idiotic threat concerning Putin. He is carefully backing away in the hope that his silly remark will be forgotten by the time the G20 gets under way.

We should be so lucky.

The gutless goon that is PM now denying that he said #shirtfront 48hrs ago-hes got it all-gross cowardice & stupidity pic.twitter.com/iywwaDHvIz 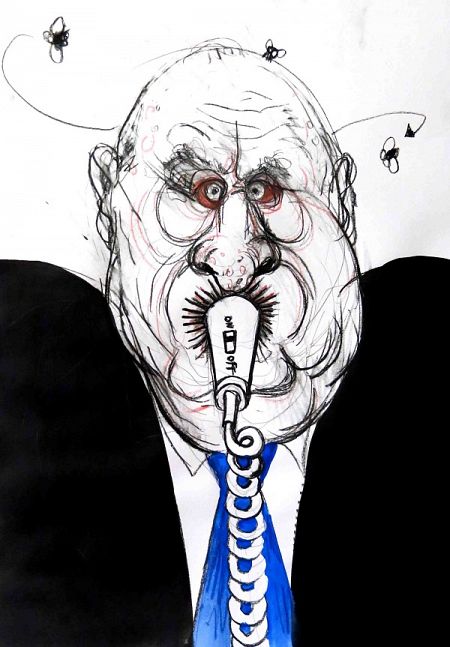