The Road to Fracist Anning

The road to Fraser Anning is littered by the spectres of Hanson, Katter, Roberts, Dutton and a host of others, writes Suresh Rajan. 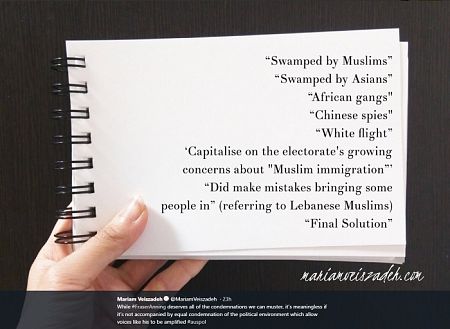 MY POST on Facebook on Wednesday says all there is to say about Senator Fraser Anning and the commentary that has played out since his incendiary speech in the Senate on Tuesday this week, 14 August 2018.

'The Road to Anning is littered by the spectres of Hanson, Katter, Roberts, Dutton and a host of others. Sadly, under the asphalt are the bodies of Aboriginal warriors and refugee and immigrant hopefuls. Yesterday was the nadir of my 44 years in Australia.'

After coming to this country 44 years ago, at the age of 15, I questioned everything, including whether I actually belonged here.

I came here as part of a family that has produced a number of highly qualified professionals. My siblings and I have contributed to the making of a better society in so many ways. Let me say in passing that it was not only my siblings and I who have contributed to our society. My father had, as a school teacher at Mirrabooka Senior High School in Perth, taught people who have gone on to be highly decorated parliamentarians, AFL footballers, newspaper columnists and other contributors. And none of this would have been possible without the work and support of my mother. All of us have been involved in various community organisations as well as working in the community sector. And yet there in the Senate was a person who received the sum total of 19 votes, questioning our right to be here, questioning our value to this society.

There is a very real danger that if we allow Fraser Anning’s speech to go unchallenged, we will do irreparable harm to the harmony that multicultural policy has brought to Australia. Our multicultural policy has always carried one element that sets it apart from most other policy positions in this country — it is bipartisan. Despite tinkering at the edges by each party, the policy has at least received commitment from the two majors.

We saw, over the few days hours, a commitment and recommitment from various people from all sides of the political divide to the non-discriminatory nature of our immigration policy. Whilst on the surface that is commendable, it must be said that both major parties have consistently discriminated against people with disabilities and certain medical conditions in the immigration system. And this discrimination has been despite our signing on to the United Nations Convention on the Rights of People with Disabilities.

And as I indicated in the Facebook post, “The Road to Anning” has not surfaced overnight. Along the way to getting to that piece of unmitigated and unfettered racism that was his maiden speech, we have had a Parliament that has:

Anning is not a new phenomenon. He is but a by-product of a society that places little or no value on diversity.

My sincere thanks go to the leaders of the two major parties, who condemned Anning in a united fashion. My utter opprobrium goes to Bob Katter for what was a laughable piece of media, when he conducted what was very loosely termed a “press conference”, but more appropriately could have been termed “The ravings of a bitter and twisted human being”.

Whilst I thank Turnbull and Shorten for their leadership in this instance, I fear that the horse has well and truly bolted. The racist genie is out of the bottle and there is now no way of getting it back inside.

The outcome of much of this will be the creation of a fear factor in my and my family’s life. Every person with a visible difference (my skin colour and the hijab or burqa) will now fear reprisals. The neo-Nazi and race “warrior” is now emboldened by the likes of Anning, Hanson, Katter and others. They have a supporter in the House that makes the laws that govern our behaviour. Why would they not be emboldened?

If you are of the view that the fact that Anning received 19 primary votes indicates that there is little support for him, can I recommend that you go to the Facebook posts of Dr Anne Aly, delivering her tearful and powerfully emotional speech in Parliament and read the comments made by people of similar ilk to Anning et al?

Reading them created the first stirrings in my psyche to think seriously as to whether this is the society for my part Indian/Singaporean/Australian/German/Russian sons. Will they ever be “equals” in a society of White Anglo-Celtic Christians? I fear not.

Having described them as Christians above is probably also somewhat unfair, in that some of them clearly have not adopted the principles contained within the scriptures of that religion.

The future of this country in a world without borders is problematic. The creation of an enclave of white superiority practitioners is a frightening and somewhat disturbing long-term outcome. The question that remains for my family and I is whether we want to remain in a nation that sees itself that way.

And until we hear proper condemnation of Katter, Anning, Hanson and others of similar low morals, the option of withdrawing my expertise and passion for a better society remains high on my list.

Suresh Rajan is a former president of the Ethnic Communities Council of Western Australia. He is a regular contributor on the subject of multiculturalism to media in Perth and has been for many years.

Statement from Ethnic Communities Council of WA: 'Is Fraser Anning the ONLY guilty party?' pic.twitter.com/rc22pnvEQ3

Collateral damage in the time of COVID-19

1 March 2020, 12:00pm How have we come to this? Geoffrey Heaviside is an Australian citizen, born and ...
Join the conversation
comments powered by Disqus
News updates