The modern language of economic dispossession

"DEREGULATION" is a weasel word. "Supply-side constraints" are weasel words.

In his book, The Dictionary of Weasel Words (2005), Don Watson describes weasel words as mere “shells”, which have had the meaning sucked out of them; they are lifeless “facsimiles, frauds and corpses”.

Weasel words infest the language of the powerful in politics and business. They are used to create an impression of authority, evidence and significance beyond what is actually being presented. They hint at wider implications, but in their ambiguity, allow for plausible denial, or “weaselling out of responsibility”. And they are often euphemistic jargon to cover unpleasant realities.

The ultimate purpose of weasel words is to manipulate, deceive and manage.

@YaThinkN @stuarthorrex Don Watson’s Weasel Words is a reference. When good words get misused the ability to communicate clearly is harmed.

An elastic concept of deregulation

Deregulation is a favourite word of big business. In its most literal form, the word deregulation means “getting rid of the rules”. And who could argue against this deregulation, when it is coupled, as it always is in business pronouncements, with waste, duplication, senseless bureaucracy and inefficiency? Who in their right mind would want to “make work” for absolutely no reason?

So deregulation implies freeing up, casting aside “supply-side constraints” to production and productivity. That seems plausible.

But freeing up what from whom exactly? And for whose benefit? And what is lost, if anything, in the “freeing up” process in terms of social equity and environmental sustainability?

More specifically, what if the word "deregulation" is just linguistic code for wealth extraction from the state and material dispossession of workers?

Big business and its shareholders have been orchestrating energetic campaigns for a range of unilateral freedoms for the last 40 years. They have sought, quite successfully, to diminish and relinquish their responsibility, in a range of areas, to the disadvantage and detriment of employees, consumers and citizens alike.

Big business’ ongoing assault on company taxes has minimised its contribution to essential public goods and services, upon which its enterprise relies — roads, rail, ports, communications, vocational education and training, research, law and order and so on. In taxation, business tax freedom equates to a commensurate burden for the ordinary taxpayer, who will carry the shortfall.

Workers and the industrial relations framework itself have been targets of relentless attack by big business. Minimum wage and condition claims are always contested in the Fair Work Commission. Within the labour market, secure and full-time jobs have progressively given way to casualisation, part-time work, contracting – including the oddity of the zero-hour contract – offshoring and automation. These forms of business freedoms have come at workers’ expense.

Occupational health and safety standards have been "streamlined", and are frequently overlooked in practice. The natural environment is widely seen as an opportunity for extraction and use, while compensatory levies for protection, stewardship and rehabilitation of the biosphere are considered oppressive.

Most ironically, tariff-free trade is trumpeted as a right by big business at the same time as it imposes monopolistic pricing on consumers through patent and copyright law, and tolerantly-policed cartel behaviour.

The underlying business rationale is always and everywhere to internalise benefits and externalise costs.

Compelling evidence of the economic impact of the neoliberal revolution is easy to find. During the decades leading up to the 1980s, labour share of national income had remained remarkably stable. From 1980 to the late 2000s, however, labour income share steadily declined at an average rate of 0.3 per cent per year across G20 countries. Even today, national income widely continues to be redistributed from wages to profits. 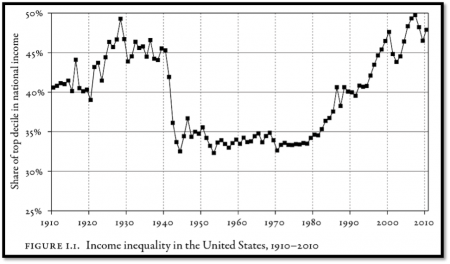 In terms of population income inequality, Piketty graphed the dramatic increase in the share of income controlled by the top 10 per cent of U.S. "income households" from 1980 to 2010.

So now we have also solved the identity riddle of big business and its shareholders’ so-called “supply-side constraints”.

These “constraints” to productivity are full-time, secure jobs; reasonable wages and conditions; occupational health and safety standards; taxation remittance for essential public infrastructure and services; environmental care of land, water, atmosphere and natural resources; an independent and balanced internal revenue system; fair recompense for the acquisition of lucrative, privatised monopolies and so on.

Words fail the neoliberals. And words especially fail them as they try hard not to tell workers, consumers and other citizens of their true intentions.

John Passant looks at the effects of neoliberalism in Australia. https://t.co/jFNpuvJZV4

Support equality. Subscribe to IA for just $5 a month.

20 April 2017, 8:00am Australia and other affluent nations can do better for the millions under threat of ...

The atmospherics of the Centrelink robo-debt debacle

9 March 2017, 10:30am Was the robo-debt scheme's main purpose to frighten, confuse and discourage people ...
Join the conversation
comments powered by Disqus
News updates