Un-Australian and unhinged, and not doing well in the three big states, the Liberals are seeing the doom of their house, writes Bob Ellis.

One does not have to go much further than Alan Joyce’s bizarre decision to cancel seventy flights to the Melbourne Cup to see why Qantas lost a good few travellers to Virgin in the following year.

Today, when two Qantas wing-tips collided in broad daylight in Los Angeles, mere hours after he announced 5,000 job cuts but couldn’t say whose they were, he will lose a few more.

By now, it is reasonably clear Joyce does not understand what Qantas means.

It is the flying billboard of Australia, proclaiming our national triumph over gravity, distance and the curse of time; one executed by Australian genius over seven decades, a genius now being decimated by one who, though a Harvard graduate and an Australian citizen, is seen by some as a blithering Irish munchkin, and a fool.

Worse, he is seen as being un-Australian, and so are the Englishmen Abbott and the Palestinian Hockey and the sinister Belgian carpetbagger Cormann, who insouciantly scared off Holden which, for the price of two cappuccinos per taxpayer per year, they could have kept here, and tried to rob the iconic, beloved Goulburn Valley of its wealth and farmlands and fabled orange juice and the beloved home town Shepparton of its industry and population.

Un-Australian is what they are, and the Qantas Board, the Abbott Government, and the whooping and leaping Sky News menagerie should be brought before a Senate Committee of UnAustralian Activities right speedily and made to swear on the Bible that they are not now, and never have been, in league with any foreign commercial interest nor paying good money, for instance, to the U.S. affiliate Cadbury’s.

The Redcliffe by-election last Saturday, which showed an 18 per cent swing to Labor, and the Nielsen poll this morning, which showed a 15 percent swing to Labor in NSW and the scandal-plagued O’Farrell losing office in any election held today, plus the Queensland Galaxy lately showing Newman losing both government and his seat, suggest calamity for the Liberals in even South Australia and Tasmania, not to mention the Senate poll in WA on April 5 where, if they lose a seat, they will lose all chance of getting laws passed before 2017.

And it has been a black seven days for them, from which they may not recover.

Scott Morrison continues to cover up a murder and sixty atrocities and has arrested, thus far, no-one for these capital crimes, and has kept them on full pay in his indirect employ, and will show no opposition, probably, to their being rehired by Transfield today, thus assisting a crime against humanity he may be tried in The Hague for, and will fail to explain to a million Kurds why an architect was clubbed to death while in his care by a man he has not yet criticised.

When, yesterday, he in a cluttered fury all but called his own regime ‘Operation Sovereign Murders’ he described it exactly, and he should quickly be stood down and studied by experts in mental illness and emotional breakdown to see if he is fit to be, any more, a minister of the Crown.

Un-Australian and unhinged, and not doing well in the three big states; derided worldwide and a bit rattled; the Liberals are seeing the doom of their house, and the ashes from which it may never rise again.

And Morrison is flying Qantas to Moresby to sort it. 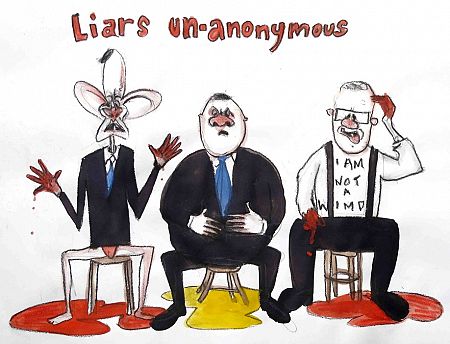