The last days of Joe Hockey

The full enormity of Joe Hockey's comments about the poor and cars has not registered with the wider public, says Bob Ellis, who calls the Treasurer's career "cactus".

IT IS POSSIBLE, I think, that nobody much yet understands the enormity of what Joe did when he said what he said about the poor not having cars, or driving them very far.

For Joe is the man deciding the nation’s priorities in the coming decade. And he has no idea, it seems, of what the nation is like. What they care about. What they think is important. What they need. What they would like to have, and own, and keep.

Many, many single supporting mothers drive, in the regions, their child ten miles to school, then turn around and drive fifteen miles to their place of work, in a filling station, or a dentist’s surgery. Many, many young men in the regions live with their working class parents, and drive thirty miles to the university. Many other young men deliver fruit from a farm to a marketplace, or bread from a bakery to shops in three or four towns.

He didn’t get this. He didn’t know. And he decided, in his dim, woolly way, how these country towns should run. He decided that most of the adult people in them should be slugged another dollar or two, or more, a week for their petrol. And he said these people didn’t exist.

This means a loss, overnight, of ten or 12 per cent of the National Party vote to Palmer, Muir, or Labor. It means the Coalition cannot win now. Because they don’t know what they’re doing.

The last Federal treasurer not to have brought down a single Budget was Jim Cairns in 1974-5. Thirty-nine years later, Joe will join him in fiscal oblivion.

Every Palmer cross-bencher senses they can win hugely any double dissolution held before Christmas. Labor senses this too. And, as more and more Liberal MPs head for gaol in New South Wales — nine so far, including Sinodinos – it seems more and more that the Liberal Party is just a racket. More and more like it is nothing more an ATM that rewards developers for dodgy donations of sums as small as $20,000 — some of which went to Joe for his North Sydney lunches.

And as this realisation develops, the more the Labor party will be tempted to join, ‘in the national interest’, Palmer’s plan for Supply be blocked and an election brought on. Or that the Senate simply advise an election. Or that the Leader of the Opposition does, as he did in 1975.

Joe suffers from what may be called the ‘funnily enough’ syndrome.

It comes from the lifelong schoolboy debater’s desire to never lose an exchange. Funnily enough, the poor are better off when they pay more taxes. Let me tell you why.

He cannot lose any encounter. He mustn’t lose any exchange. He has to win every move, every skirmish, every small battle, bugger the war.

Though very effective on the floor of the House for his first eight months as Treasurer, he is now, I think, the worst politician, tactically, since Snedden, who famously said, funnily enough, we won the election. We just didn’t get enough votes to form government.

And he has no future now.

PM Abbott asked if @JoeHockey still has his full support. The voice says, Yes, everything else, NO #auspol https://t.co/qUqxF78I3d

Christopher Pyne declines six times to back Joe Hockey over impact on poor of fuel tax rise http://t.co/x0ce6ysphu via @smh

@davrosz Hockey's career's not dead - it just smells that way. 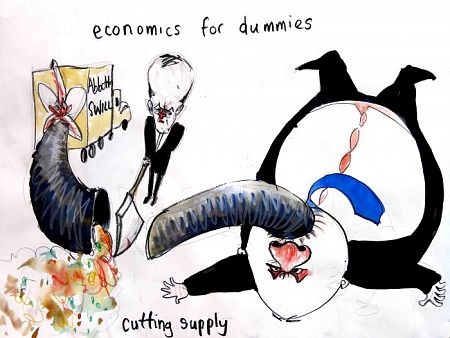