The GST: Is an efficient tax a fair tax?

The Henry Review advocates raising the GST rate because it is an efficient form of taxation, however Raff Piccolo says just because a tax is efficient, that doesn't necessarily make it fair or beneficial to society.

Dr Parkinson has reintroduced some balance to a discussion that has until recently been relatively lopsided.

Until relatively, recently the only manner that the Federal Government sought to adopt as a means of reducing the public expenditure deficit was through a reduction in spending (as to be recommended by the Commission of Audit). To take this approach to reducing the public expenditure deficit simply ignores half the discussion that has to be had — the other being a possible increase in taxation.

Dr Parkinson is not the first to express these sentiments. Indeed, the final report of Australia's Future Tax System Review (or the Henry Review) similarly provided that the GST 'is potentially one of the most efficient' forms of taxation.

But the questions that raises are:

What is meant by efficient?

Can efficiency be equated with fairness or equality?

According to the Henry Review, the GST is an efficient tax in terms of compliance costs. Broadly speaking, it costs less to administer the GST when compared to some other taxes (such as stamp duty) because a single rate of taxation is applied to a range of goods and services.

Simpler and less expensive compliance costs are not something that should be dismissed out of hand, however it does not follow that, just because it is cheaper to administer, a particular tax should as a consequence be preferred over an the alternative tax that is more expensive to administer.

It does not follow that the simpler tax is necessarily the fairer tax.

For example, as the Henry Review highlighted, the GST is often critically described as being a ‘regressive’ tax because it is charged at a flat rate, meaning each consumer, regardless of their purchasing capacity, must pay the same amount for the given product or service.

Thus, as a result, those who probably can least afford to burden an increase in the GST would be hit the hardest.

This is manifestly unfair.

Thus in keeping with the balance that Dr Parkinson sought to reinject to this discussion, when we talk about taxation, raising the GST should not be the only option placed upon the table. As the Henry Review acknowledged, changes to the GST should be coupled with changes to income taxation.

These changes should be required to enable the Federal Government to provide concessions and ensure that those who least can afford an increase in GST are not plunged (further) into poverty.

However even we do make the necessary changes to our income base so that we are able to both increase the GST and rightly provide concessions to those who could not otherwise afford to burden the increase, have we gained anything?

Will the efficiency to be gained be greater than the concessions that must be made to ensure that we maintain fairness in our taxation system?

A substantial amount of number crunching is still required so as to ensure that we not only have an efficient tax system, but a fair tax system. 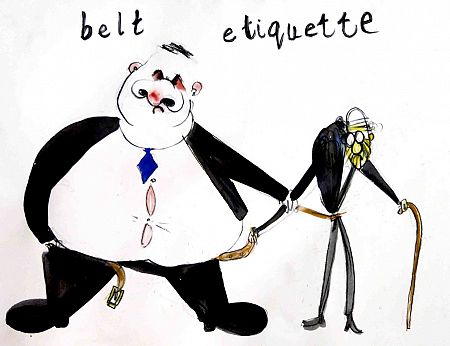 As Australian as ‘spag bog’ and ‘special fried rice’

The GST: Is an efficient tax a fair tax?

Are we becoming a selfish society?