The Turnbull Government has quietly signed Australia up to the GIF Framework Agreement for the development of Gen IV nuclear reactors and is currently conducting a Parliamentary Inquiry of which most of us are unaware, writes Noel Wauchope.

YOU HAVE probably never heard of the "GIF".

I hadn't, until just this week, when by chance I heard of the Parliament Inquiry into the Framework Agreement for International Collaboration on Research and Development of Generation IV Nuclear Energy Systems.

The Committee consists of nine Liberal MPs, six Labor and one Green.

That inquiry is being held now and the Committee calls – or more correctly, whispers – for submissions by 28 April 2017.

It is all about the GIF — Generation IV International Forum. The Australian Government signed up to this, in 2016, without any public discussion.

What is The Generation IV International Forum (GIF)? 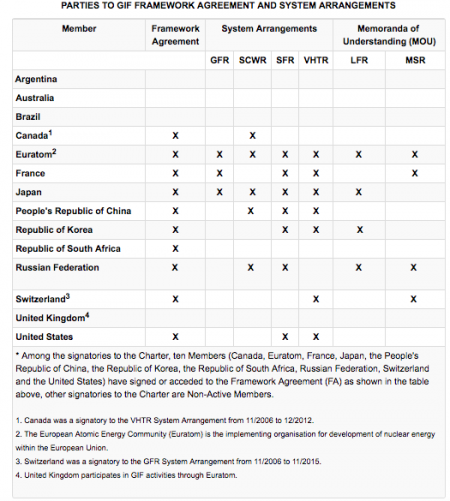 The World Nuclear Association describes the collection as countries for whom:

' ... nuclear energy is significant now and also seen as vital for the future.'

What is the 2005 Framework Agreement AKA "the charter"?

According to the World Nuclear Association the 2005 Framework Agreement:

' ... formally commits them [the signatories] to participate in the development of one or more Generation IV systems selected by GIF for further R&D.'

Australia signed the charter on 22 June 2016, represented by Dr Adi Patterson, COE of the Australia Nuclear Science and Technology Organisation (ANSTO) — pending this Joint Standing Committee on Treaties review. ANSTO is to be the implementing agent.

When the Australian Government quietly signed up to the GIF, it made no commitment to any particular action towards developing new nuclear reactors. Other countries – including Japan, Canada, France, South Korea – have committed to working on particular types of Generation IV reactors. Australia might be expected to not only fully sign up as a member of the charter, but perhaps also to provide funding and resources to develop one or more types.

Australia’s signing of the GIF

Media reports indicate Australia made a bid, or approach, to join GIF. The active seeking out of an agreement at odds with both public opinion and the current government's policy position on nuclear power, and is inconsistent with Australian laws, which prohibit the use of this technology, is astounding.

This is what the government said in 2016 in relation to joining GIF:

Australia’s invitation to join this important global project marks an exciting opportunity to be at the forefront of global innovation in the nuclear industry.... Inclusion in the GIF further strengthens Australia’s position as a nation that has the research muscle to deliver innovations on the global stage. It reinforces the government's $1 billion National Innovation and Science Agenda, encouraging our best and brightest researchers to collaborate with international experts.

Australia has firm non-proliferation goals and nuclear safety objectives, and contributing to the global conversation on this level is an opportunity to assist in the research that is making nuclear technologies safer around the world in the long term.

What are Generation IV reactors?

Generation IV reactors describe six models/concepts of reactors that claim to solve many of the problems with nuclear power — waste, proliferation risks, safety.

There are six reactor technologies described as Generation IV. A 2014 industry update roadmap for the development of these six technologies can be seen at seen at Technology Roadmap Update for Generation IV Nuclear Energy Systems. 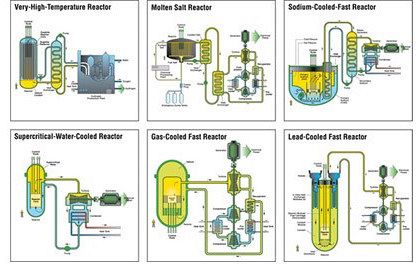 In short, all six technologies are in the "viability" (conceptual) or "performance" (engineering) phase. The earliest prediction for the development of a prototype is 2022, but it is expected it will take much longer.

ANSTO makes a number of questionable assumptions about Australia joining in developing new nuclear reactors. For example, ANSTO claims that it would 'further Australia’s non-proliferation and nuclear safety objectives', and 'further strengthen our claim as the most advanced nuclear country in SEAP', and will position Australia to develop Generation IV reactors.

There are so many questions about this development it is hard to know where to start:

A couple of examples:

Nuclear power cannot be approved under either the Environment Protection and Biodiversity Conservation Act 1999, or the Australian Radiation Protection and Nuclear Safety Act 1998.

In 2017, the "conventional" nuclear industry, with leading companies AREVA, Toshiba and Westinghouse, is beset by financial problems. At the same time, new renewable energy systems are flourishing and coming down in price. It seems absurd that the Australian Government should now want to venture into the development of new nuclear reactors that exist only in the design phase and have enormous problems getting both private investment and insurance.

Nuclear energy is still a stupid idea for Australia https://t.co/uAXwZKfoUX