The Fraudband body language of Abbott and Turnbull

In early April, the Coalition made their first major policy announcement. It was quickly dubbed their #fraudband policy by the Twitterverse and roundly criticised by experts. Sarajade looks a little deeper at the body language of Abbott and Turnbull. 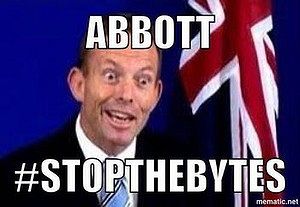 We use body language daily, without any awareness. Clues to a person’s emotional state can be subtle. Replaying the gestures, movements, facial expressions  and verbal communications of politicians allows us to reveal hundreds of microscopic facial expressions. These forms of body language often portray the speaker’s true intentions.

Before we could speak, humans used innate body language to communicate with each other. The ability to communicate, at times, meant the difference between life and death.

Body language also has the potential to make or break politicians. The 1960 debates in the U.S. between John F. Kennedy and Richard Nixon is seen by many as the turning point for political debates.

Research was undertaken at the conclusion of the first debate that election year. People who debate through radio declared Nixon the winner. However, the 70 million viewers who watched the debate on television declared Kennedy the winner. This is believed to be due to the fact that, while Nixon sounded confident, his excessive sweating made viewers think otherwise. Kennedy went on to become the 35th President of the United States. A straw poll revealed that over half of all voters referred to the debates as influencing their vote.

This brings us to Australia and the current political year we find ourselves in.

The recent announcement of the Coalition broadband policy supplied us with plenty of vision that I believe deserves closer analysis. The behaviour and body language of both Opposition Leader Tony Abbott and Shadow Minister for Communication Malcolm Turnbull during the announcement seemed so bizarre I felt compelled to take notes and analyse it further.

The subconscious controls the Autonomic Nervous System which dictates breathing and heartbeat, and the function organs and glands. In essence, it's the body’s autopilot. Just as we can’t stop breathing or the beat of our heart, we can't control our body language. It's completely involuntarily when we are under stress.

Body language is particularly useful in detecting lies and deception. People who are being deceitful will experience a dry mouth, blink rapidly, avoid eye contact, touch their face, clear their throat or cough and touch their nose. Those who are being honest are more likely to appear natural, at ease, with a direct gaze, minimal blinking and no irregular movements.

Shaking your head while saying yes, an Abbott habit, is seen to negate what is being said. Coughing is used as an excuse to cover ones mouth or to cover a lie. When Abbott flattered Turnbull as being an internet pioneer he coughed and covered his mouth. He did the same upon saying “We are confident 25 megs is going to be more than enough for an average household.” He again coughed and covered his mouth when he talked about the broadband speeds available under their policy. He did the same when he said “....we are going to have to produce something saleable.” There are numerous other occasions where this behaviour was repeated.

Watch for Turnbull's face at the 24 second mark:

Touching your nose is another classic gesture that reflects the likelihood someone is being deceitful. Turnbull touched, rubbed, swiped his nose no less than 9 times including during the key statement: “If you believe in everyone having internet access you've got to make it affordable.” When questioned about the copper infrastructure, they plan to keep using as part of their plan, he grabbed his nose as though he was about to pull it off. “Putting the additional fibre capacity up to the fibre distribution point is cheap to do” also elicited a nose swipe.

Turnbull appeared arrogant, defensive and puffed up with pride when speaking. His body language displayed what could be interpreted as suppressed hostility toward Abbott, barely able to be contained.

When Abbott spoke about using the existing copper network, Turnbull noticeably stepped away from him and bowed his head (normally a form of respect).

Every so often Turnbull showed, by his intermittent glances into the distance, signs of wanting to escape. Abbott however needed Turnbull to give his broadband policy credibility. He appeared willing to be submissive and appeal to Turnbull’s ego by sacrificing his own temporarily. He used flattery several times, perhaps in an effort to manipulate him.

Turnbull indicated “no” by way of shaking his head in response to a reporter’s question, directed at Abbott, concerning their NBN privatisation plans. Abbott lowered his gaze and coughed, again indicating deceit, before answering.

He responded by saying “...ours certainly will be going back into the private sector.” Turnbull, until now seemingly unable to bring himself to look at Abbott, swung his head around while leaning back slightly. He looked at him with obvious surprise.  He appeared to have been kept out of the loop on that plan. Abbott quickly added, as if to dampen Turnbull’s reaction, “this would not happen until it was ready for sale.” At times Turnbull smiled condescendingly while shaking his head as though Abbott were  less than competent.

Abbott’s submissive slight shoulder stoop, head duck and clasped hands to protect himself indicate anxiety. He massaged his fingers in an effort to calm himself.

Tony Abbott has great difficulty maintaining eye contact at the best of times. This does not exactly engender trust. Inability to maintain direct eye contact and over blinking could point to deception.

When both engaged with the reporters, Abbott’s behaviour was peculiar. He displayed an increase in anxiety through self-calmingly massaging his hand with four fingers. When Turnbull responded to a reporter, Abbott's eyes shifted around. This was combined with over blinking or looking Turnbull up and down without moving his head. Looking someone up and down is seen as a very intimate gesture. Doing this while inside Turnbull’s personal space is very strange behaviour.

Abbott hovered over Turnbull during the reporter’s questions. He appeared anxious and fearful, except for when Turnbull made his silly “Irish” analogy. He smiled and laughed, perhaps releasing built up tension. His reaction faded embarrassingly when he realised he had misjudged the moment and no one else was laughing.

After watching the video I have come to conclusion that Abbott is unable to read basic social cues. Turnbull’s personal space was invaded a number of times during the policy announcement. Abbott appeared to step on the toe of Turnbull's shoe as he tried to edge away.

On another occasion, Abbott, having edged so far into Turnbull’s personal space that his arm overlapped Turnbull’s, he hit him without any apparent conscious awareness.

A leader of the opposition, who they say may be our next prime minister, who is unaware of social cues and cultural etiquette, could be a real problem on the world stage.

For a full "timestamped" breakdown of this policy launch and the body language between Turnbull and Abbott, please click here.

Watch the entire announcement below: