The Coalition's immigrations spokesperson Scott Morrison has taken dog-whistling to such an elevated level, Chris Ryan calls him the “dog-bugler”. 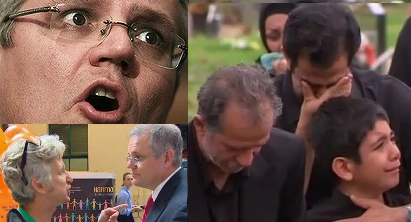 WHY COALITION IMMIGRATION SPOKESPERSON SCOTT MORRISON IS A RACIST

A recent discussion in the Australian media involved the repeated asking of what seems to be a rather pointless and stupid question:


“Is Australia a racist country?”

The countless commentators, academics, politicians and media personalities who posed and/or answered this question knew better than to consider it for more than a few seconds before giving a resounding and unanimous “NO!”

The more pointed, sensible and important question is this:


“Is Australia a country that needs to stamp out racism?”

When we ask this question, the answer, as in all other civilised nations, is “YES”.

For those who say: “No”, let them stand up, have the courage of their convictions and speak their answer loud and clear to the entire community. Here, as with many aspects of politics and public debate, the problem is not the answer, but the nature of the question.

Once we consider such problems in the context of debates around racism, there is an obvious first question to ask.

What is a racist?

Is a racist simply someone who spouts hatred and prejudice against a particular ethnic, cultural or religious group? Is it someone who wears a pillowcase on their head or a swastika on their arm? Or is it a more subtle creature that speaks of the need to protect “traditional” values against the threat of corruption or destruction by “outside” influences?

A racist, as most of us understand, can be any, or all, of these things. But there is another type of racist who is rarely identified. It is a sub-species of racist as dangerous to a civilised society as a drug resistant strain of deadly virus.

This is the type of racist that has at their disposal all of the standard defences against accusations of racism. They have “plenty of ethnic friends”; they have “never openly supported” racism; they have “always fought against racism”; they believe that racism “has no place in our community” and so on and so on. This kind of racist can say such things and mean it; it may even, in their mind at least, be true.

This type of racist is the kind of creature who, while not openly practicing racism in the traditional sense, seeks to profit from racism. That profit can come in the form of television or radio ratings; newspaper sales; political influence; or, the most important type of profit in public life — votes. 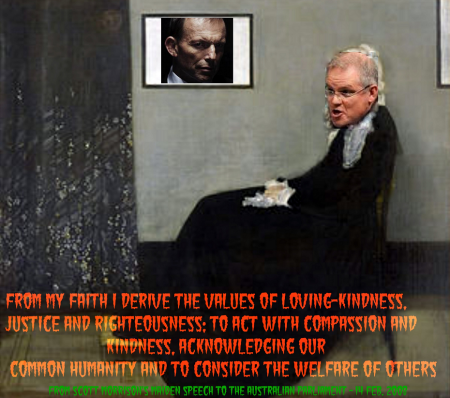 The most prominent among them today is the Federal Member for Cook (home of the Cronulla riots), Scott Morrison.

Morrison’s recent assertion that local police and residents living near asylum seekers in the community should be notified of their presence was enough to make any decent, thinking person’s stomach churn. Yet it is simply another in a long line of attempts to profit from racist fear, loathing and ignorance.

His objections to taxpayer funded flights allowing relatives of asylum seekers killed in the 2010 Christmas Island tragedy to attend their funerals was so repulsive that even members of his own party room strongly rebuked him.

Presumably, some of those colleagues were so concerned about the rank opportunism and cheap, vomitous politics that comes so easily to Morrison that they decided to leak details of one of his submissions to shadow cabinet.

According to those sources, two weeks before the Christmas Island tragedy, Morrison told a shadow cabinet meeting that the Coalition should ramp up its questioning of multiculturalism and appeal to deep voter concerns about Muslim immigration and "inability" to integrate.

These, and many other examples, show that the Member for Cook has taken dogwhistling to new heights (or should that be depths). He is the mother of all dogwhistlers — not so  much a dogwhistler as a “dog-bugler”; proudly standing at the vanguard of a growing army of truly ugly conservatives happy to trash the last traces of decency and civility remaining from the legacy of Menzies.

This type of racist has myriad enablers, cheerleaders and defenders. In Australian public debate, they include the Murdoch papers, Murdoch’s radio network, Murdoch’s Sky News, Murdoch, Packer and Rinehart’s Channel Ten, the Rinehart papers, the Rinehart Radio Network, the Singleton Radio Network and their thousands of loyal, fearful, petty, pathetic and pig-ignorant staff. *

Their interest in the abovementioned profits from racism is all too clear.

None of these fellow travellers ever seem to consider how harmful their behaviour may prove to the future of our democracy and the values we claim to hold as a civilised society. We should never expect them to consider such things either.

While he is now a Pentecostal who attends the Shirelive Church, Morrison was apparently a dedicated member of the Uniting Church in his younger years and says that his faith drives everything he does in life.

Then President of the Uniting Church, Rev. Alistair Macrae said the following of Morrison in 2010:


Mr Abbott and Mr Morrison, who both proudly proclaim their Christian faith, have lost sight of the core of that faith – ‘love your neighbour’ and ‘do unto others as you would have them do unto you’. They have failed to demonstrate any commitment to one of the Judeo-Christian tradition’s most enduring directives – ‘welcome the stranger’.

We are talking about people who often need to be treated for such conditions as post-traumatic stress and severe trauma. Callous and punitive policies such as this are not the mark of a fair, decent and progressive country.

One wonders to which Morrison is more committed; his professed Christian faith or the ugly politics of the dogwhistler. Actually, there doesn’t seem much reason to wonder about it — the facts of his behaviour speak for themselves.

Does he even blink or think twice when senior Christians level such critiques?

Certainly, the energy and gusto with which he plays his brand of politics suggest that he sleeps just fine at night.

Perhaps his boss, the Jesuit educated Tony Abbott, gave him some advice on how to keep a Christian conscience at bay in the dark and lonely hours of the night.

If Scott Morrison, as has often been said, is a rising star of the Liberal party, then God help us all.

* Note: I don’t distinguish between Lachlan and Rupert here as they might as well be one person.