Brace yourself — because the next Newspoll will contradict the current mood that Labor has Abbott on the run and will almost certainly save the Liberals, writes Bob Ellis.

Murdoch likes to bring good news to the Liberals when they are down and depress the mood of Labor when they think they are winning. And so it will be, and so it will go, on Tuesday next when Labor, 42, down from 45, and Abbott, 34, up from 30, and beating Gillard 41 to 37, will in the Newspoll contradict the current feeling that Craig’s oration, the Swan Budget, the defiant hooker, the economic figures, the employment figures, the nanny allowance and the Pyne-Abbott dash for the door has done the Tories harm.

The figures will be arrived at by, well, a kind of cheating.

This is how it will be done.

Much of the Labor vote will be away on the long weekend and no mobile phones will be rung. Those still home will be the old, the ill, the childless, the friendless, and the mad — and they, as always, will favour the Liberals, the Nationals, Family First, the DLP and the LNP.

And the effect on Labor this time will be devastating. Gillard’s last shred of hope will go and Rudd will be asked to challenge and out of the wash, out of the cradle endlessly rocking, in a week or two, or four, a new leader will emerge. Crean, perhaps, who will lose; not Carr or Shorten, who could win. Or Plibersek or Combet or Roxon, who could run Abbott close.

But, in fact, the poll will be wrong. It will be no more than an indication of the absence this weekend from their landline phones of those in caravans, on boats, at Darling Harbour, in 3D movies, in restaurants, at the Film Festival, bushwalking with their children, or visiting their mothers in country towns.

Martin O’Shannessy will know this — and print the bent figures anyway. Rupert will like that. He lives, and rules, by bent figures. By forged Hitler diaries and bent figures.


FLASHBACK: WHAT HAPPENED IN THE LAST NEWSPOLL

How do I know all this?

Well, I noticed one year how the Labor vote plummeted just before Christmas, and came back again, resurrected, vigorous and confident, after Australia Day.

And I worked out that schoolteachers, who always vote or prefer Labor, were almost by definition out of town, away from their fixed line phones, on those Christmas-holiday weeks. And they were the biggest profession, with a quarter of a million votes, and their absence would actually alter the total vote.

And it happened year after year for seven years (and you can look it up), so it is clear that not only was this happening — but O’Shannessy and his predecessors at Newspoll were doing nothing to correct it.

And this meant in turn that it would happen again on the Easter, Queen’s Birthday and Labor Day weekends. And O’Shannessy would not correct those findings either.

And he will not this Tuesday likewise. Wait and see.

Well, it’s what you might call benign neglect. It’s like saying: some schoolchildren buy cigarettes illegally through an intermediary, but cigarettes are a legal product for adults, and there’s nothing much we can do about that, and the cigarettes they buy will eventually kill them, but, hey, that’s the law, they’re a legal product, what can we do?

O’Shannessy knows a lot of his Newspolls are wrong because of weather events (the Queensland floods, for instance) or sporting events (like football finals, or the Bathurst 500), or cultural difficulties (his pollsters, I’m told, hang up on impenetrable foreign accents); and he can’t legally ring mobile phones, though he knows this diminishes year by year the Labor vote, or it probably does. But, hey, what can he do? Start doorknocking again? That’s too expensive.

Better to print the untruth. The anti-Labor untruth.

Rupert, his chief customer, likes it that way. 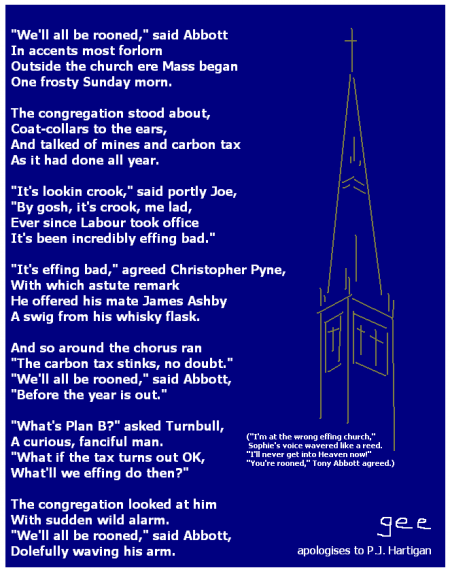