The climate change denialists may soon to be running the asylum

Anyone who places stock in safeguarding the current and future climate (and for that matter anyone who doesn't) should prepare themselves for the risk that very soon, climate science deniers, contrarians and sceptics will be running the show, writes Graham Readfearn. 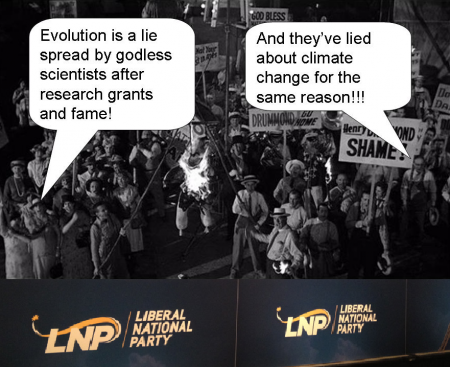 Current Liberal leader Tony Abbott, if we care to remember, once described climate change as "crap". Views shared among Abbott's parliamentary coalition ranks are that climate science is a "leftist fad" and a "work of fiction".

The Liberal-National Party's new Queensland Premier Campbell Newman and his environment minister Andrew Powell are currently presiding over a massive boom in coal and gas projects. Both have said they're unable to accept the evidence of human-caused climate change, going against the scientific findings of the country's main science agency the CSIRO and the country's Bureau of Meteorology, plus every major science academy on the planet.

Instead the Newmans and Abbotts of this world would rather stake the future of their constituents, our economies, our food supplies and our coastlines on the ideologically-blinkered pseudo-science of narrow vested interests and free market fundamentalists.

The latest snapshot on this inglorious race to the bottom came last week during the Queensland LNP state conference with a motion proposed by the Noosa LNP member Richard Pearson.


“…remove environmental propaganda material, in particular post-normal science about ‘climate change’, from the curriculum and as adjunct material at exam time”.

The motion was passed with party members overwhelmingly in favour.

LNP state representative Glen Elmes recently thanked Pearson in parliament for helping him win his Noosa seat at the state election earlier this year — perhaps those visits to Noosa by fake climate experts Christopher Monckton and Professor Bob Carter have rubbed off on the Sunshine Coast community?

As reported on Brisbane Times, Pearson said: “Few people understand that the so called science of climate change is really what can be defined as 'post-normal' science,” before apparently arguing that climate change went beyond traditional understanding of science based on experimentation and falsifiable theories.

To Pearson and others, the experiments of John Tyndall in 1859 which established the warming properties of what we now know to be greenhouse gases just didn't happen. Not in existence either, are the reams of scientific papers over many decades which have attempted but failed to falsify the "theory" that burning fossil fuels is causing the world's average temperature to rise, the oceans to become more acidic, the sea levels to rise and the ice at the poles to melt.

Also not in existence is last week's study by almost 400 scientists (they're everywhere) which showed that greenhouse gas emissions were increasing the likelihood of extreme weather events.

So far, Premier Newman has clarified that while Pearson's motion has been passed by the party, this doesn't mean it will be adopted by the parliamentary group which he leads.

"We will always do the right thing by Queenslanders ahead of the LNP," he said, forgetting that just a few weeks ago he told Queenslanders the state was actually "in the coal business".

Regardless, reaction to the motion has been damning. Anna-Maria Arabia, the chief executive of Science & Technology Australia, which represents almost 70,000 scientists and technology experts in Australia, described it as "extremely harmful".

The secretary of the Queensland Teachers' Union Kevin Bates told The Australian that it was important schools taught children to have an "open mind" (although presumably not so open that your brain falls out). "Our greatest concern is that this is a government that is going to interfere in the education process," he said.

One blogging research scientist wrote that the motion was "preparing our children for future ridicule".

Helping in this process is the Institute for Public Affairs, which has been sending out a discredited book on climate change to Australian schools. The book How To Get Expelled From School, written by Professor Ian Plimer, a member of the board of two of Gina Rinehart's mining companies, was launched by former Prime Minister John Howard.

While consistently claiming that school children are being brainwashed by climate change "propoganda", those who push this line rarely (if ever) produce any actual evidence. Pearson didn't define what he meant by "propoganda" or "post normal science".

Plimer's genuine piece of propaganda was described by the Commonwealth Department of Climate Change, which analysed his book, as "misleading" and based on "inaccurate or selective interpretation of the science".

It should not be forgotten that Tony Abbott isn't afraid of pushing his own misinformed climate dogma on young schoolkids when given the chance.

In 2010, the Catholic Jesuit told a class of five and six year olds in Adelaide:


"OK, so the climate has changed over the eons and we know from history, at the time of Julius Caesar and Jesus of Nazareth the climate was considerably warmer than it is now."

The University of Queensland survey found only about one third of Liberal/National politicians accepted the world was warming because of human activity. This compared to nine out of ten Labor politicians and practically all Greens.

Then there's the "conservative white male effect" discovered by scientists (yes, them again) in the US linking the described demographic to the denial of human-caused climate change.

The Australian conservative political movement's lurch towards the denial of human-caused climate science is like a mirror-image of the same enlightenment-crushing ideas of many US Republicans.

None of the recent candidates for the Republican presidential nomination (excusing possibly John Huntsman) were able to publicly back climate change science, with some reverting to scepticism after previously accepting the issue.

Also in common with the US is the existence of Tea Party-style "grassroots" activism — in Australia helped along by free market think tanks that claim regulating greenhouse gas emissions is an attack on our freedom.

But rather than have an honest debate about a policy response to a real world risk, they sink to trying to discredit climate science while telling the public that carbon dioxide from burning coal is just "food for plants".

Earlier this week the climate sceptic organisation the Galileo Movement, founded by two retired Noosa (is there something in the water there?) businessmen, tweeted a link to a document written by Viv Forbes claiming coal was not dirty and CO2 was plant food. There was, however, no mention anywhere in the document that Forbes is a director of Stanmore Coal.

Galileo's patron is Sydney radio host Alan Jones, who recently told a crowd that climate science was "witchcraft" and a "hoax".

Our descent into the deluded world of pseudo-science occupied by astrology, creationism, crystal healing and homeopathy is almost complete. It's a place where progress dies and business-as-usual thrives.