The Canavan file: The curious case of a crime and a Senator becoming Italian

Senator Matt Canavan had claimed his mother Maria had applied for Italian citizenship in 2006, then his barrister told the High Court Maria's actions were “irrelevant”. What's not being discussed is Bryan Canavan's 2007 fraud conviction. Anti-corruption researcher Peter Harden builds a timeline from his voluminous file notes.

In late July, Senator Matt Canavan told reporters in Brisbane that he was not born in Italy and had never visited the country. His mother, Maria, who has never visited Italy either and was born in Australia, registered herself and her son for overseas citizenship at the Italian consulate in Brisbane in 2006.

"According to the Italian Government, I am a citizen of Italy," said Senator Canavan.

Senator Canavan said he did not sign the Italian citizenship papers himself:

"Following the resignation of senators Ludlam and Waters last week, my mother raised with me the possibility that I was, in fact, an Italian citizen on Tuesday evening."

Attorney-General George Brandis said the Government would refer the matter to the High Court when Parliament returns.

Matt Canavan was going to be okay, though, said the Attorney-General:

"It is the Government's preliminary view that because the registration was obtained without Senator Canavan's knowledge or consent, that he is not in breach of Section 44 of the constitution."

Apparently, Matt has been Italian since he was two!

Senator Matt Canavan has been an Italian citizen since age TWO. There goes the classic "my mum did it" defence https://t.co/Lyajcw7soN pic.twitter.com/qBpAnxjfCq

Soon after the media released the news from the High Court hearing that he had been a citizen since he was two years old, some speculated that Matt Canavan had changed his story to divert attention away from his previous claim — that his mother had applied for Italian citizenship without his knowledge in 2006.

Matt Canavan's barrister has revealed he's been an Italian citizen since he was two years old. @GeorgiaDone7 #7News pic.twitter.com/8JcvL6JvQA

The Registry of Italians Resident Abroad (A.I.R.E.) was established by Law No. 470/1988 and contains all the personal data of Italians resident abroad for a period of more than 12 months.

It is administered by Italian municipalities based on the data and information supplied by the foreign missions.

What was the real date Maria applied for citizenship?

There is now significant confusion and speculation about the actual date that Maria applied to be added to the Registry of Italians Resident Abroad at the Italian consulate in Brisbane.

The exact date of the application by Maria Canavan remains unknown and is a vitally important piece of information, given the timing of his father, Bryan Canavan's, 2007 incarceration for fraud. (More about that below.)

Then there is also the question of why Maria applied if Italy changed the law to include her children? Surely the Italians would have told her that when she first enquired about applying?

A COLLEAGUE of one of the government’s rising stars says it’s “sloppy” Matt Canavan didn’t know he was a dual-citizen when he ran for Federal Parliament. It comes as the unsigned citizenship papers have reportedly been found. 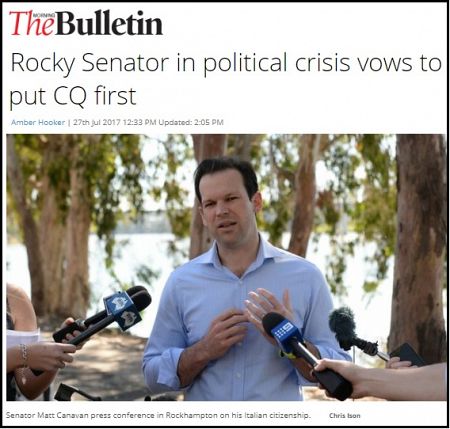 Senator Canavan continued to categorically deny any knowledge he could be an Italian citizen, and reiterated he will let the matter play out in the High Court rather than give a running commentary.

He advised he is making arrangements for his own legal representation.

Attention turned to Canavan's father, Bryan Michael Canavan, who was jailed with a colleague over a $1.6 million fraud against his former employer Nestle between 2001 and 2004.

Sen Canavan refused to go in depth on whether his conviction and subsequent jail-term had anything to do with his mother's decision in 2006 to register herself and family members as "Italian citizens abroad" - a form of citizenship with the consulate in Brisbane.

"I am not going to go into all the personal details of those things because they are not relevant to my position in the Senate," he said.

"It was a tough time for our family, as I say we stood together really strongly and I am proud that we did and we got through it and I am not going to go into any further details on that matter."

TWO accounts managers were entrusted to guard against fraud at one of the world's biggest companies but instead stole nearly $1.6 million. Prosecutor Julie Alyward told the District Court in Brisbane today, Bryan Michael Canavan and Phillip Michael Gardiner held senior positions with Nestle Australia Ltd but during a 3 1/2 years period stole cash and property for no other motive than ‘greed’.

According to the verdict and judgement record from the District Court of Queensland (at Brisbane), Bryan Michael Canavan (born 5/8/59) was held in pre-sentence custody from 18 January 2007 until 23 May 2007. Canavan (and the co-accused P.M. Gardiner) were taken into custody at the Arthur Gorrie Correctional Centre in Brisbane on 18 January 2007.

Bryan Canavan pleaded guilty on 22 May 2007 to two fraud offence charges during his time as a senior account manager within the beverage and confectionary division of Nestle. Multiple offence dates ranged from 1 January 2001 to 26 May 2004. The court of Judge M.E. Rackemann ordered 7 years and 6 months imprisonment, with eligibility for parole set at 17 November 2008.

Nestle had engaged KPMG to provide a forensic investigation and their June 2004 report set out the allegations.

According to the Property Offence Schedule, a third party, John Learmonth, is identified as a proprietor of a number of stores in the vicinity of Bundaberg. 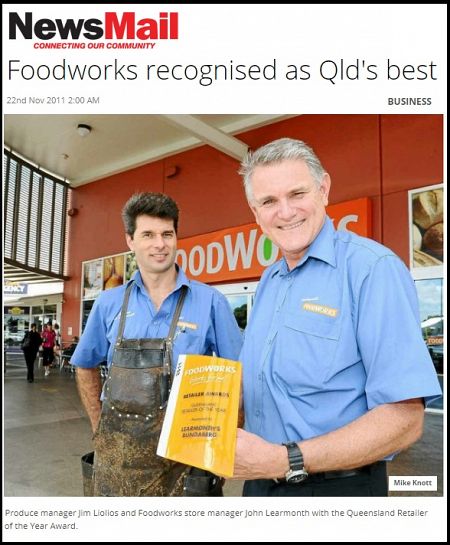 As part of the loyalty program, independent retailers obtained rewards by way of claims processed through the accounts payable system. Independent Australia does not allege any impropriety on the part of Mr Learmouth, however it is not clear in the documents why he was not charged.

The accused are stated to have manipulated a loyalty program (by altering invoices) so that cheques were issued to obtain benefits and property "they were not entitled to”. The arrangement between the two accused and the third party was that the money received was shared equally.

Allegations against Mrs Canavan and Mrs Gardiner having received Australia Post money orders totalling at least $307,672.42, were rejected in the Property Offence Schedule, on the basis the wives had no knowledge of the sources of funds that were deposited into accounts in their names and had been misled by their accused husbands.

Bryan left Nestle and worked at Ray White Coorparoo from September 2004 until he was taken into custody in January 2007. Between September 2005 and January 2007, Bryan Canavan sold six of his Brisbane and Gold Coast properties (at Hope Island, Mitchelton, Camp Hill, Woolloongabba, Bulimba and Cannon Hill) to make repayments to Nestle.

Maria Canavan in her statement to the court (dated 12 July 2006) stated she was a full-time employee of the Commonwealth Bank for 11 and a half years. Maria states that her son Matthew was working as an economist at the Productivity Commission in Canberra, her other son John was working as a tax accountant with Deloitte in Brisbane and daughter Emma was a journalism student at the time. 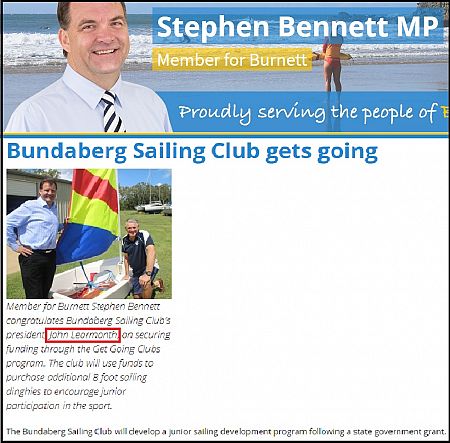 Bryan Canavan was released from prison on parole after only serving a small part of his sentence.

These days, he works as a real estate agent. On his current real estate profile on the Stroud Homes website, he proudly quotes both he and his wife Maria's property investment experience.

'Over the years, Bryan has not only been on the Sales side of the New Homes market, but together with his wife has built seven new homes, for both residential and investment purposes. The most recent project was a brand new investment property in East Ipswich.'

What happened to all the money?

The KMPG report (June 2004) set out the allegations.

As part of the loyalty program, independent retailers obtained rewards by way of claims processed through the accounts payable system. The accused are stated to have manipulated a loyalty program (by altering invoices) so that cheques were issued to obtain benefits and property "they were not entitled to”. The arrangement between the two accused and the third party was that the money received was shared equally. Allegations against Mrs Canavan and Mrs Gardiner having received Australia Post money orders totalling at least $307,672.42, were rejected in the Property Offence Schedule, as mentioned above, on the basis they were deceived by their husbands. (Independent Australia does not allege any impropriety on the part of Mrs Canavan or Mrs Gardiner.)

In December 2006, a deed of settlement was entered into between Nestle, the two accused men and their wives in favour of Nestle, for the amount of $1,593,427.95.

In a strange twist, in 2008, KPMG employed Matt Canavan as an economist.

There are still a number of questions waiting to be answered about this affair:

Screenshot of Bryan Canavan's LinkedIn profile, before it was removed

There is significant public interest and a context to asking these questions, given the senior role Senator Canavan holds in the Government as Minister for Northern Australia, and especially considering his role with the Adani project in QLD, who have applied for nearly $1billion of tax payers money.

At this stage in our story, integrity becomes vital.

The Canavan's have a family discussion about becoming Italian citizens. Maria Canavan, mother of Matt, was born in Australia but has Italian-born parents. Matt expresses no interest in becoming an Italian citizen.

Maria registers herself and family members as “Italian residents abroad” - a form of citizenship - with the Italian consulate in Brisbane. Written form signed by Maria includes 25-year-old son Matt, plus his brother and sister John and Emma. Matt is not immediately told of the form being lodged, but eventually becomes aware of his mother’s Italian citizenship.

18: According to the verdict and judgement record from the District Court of Queensland (at Brisbane), Bryan Michael Canavan (born 5/8/59) was held in pre-sentence custody from 18 January 2007 until 23 May 2007. Canavan (and the co-accused P.M Gardiner) were taken into custody at the Arthur Gorrie Correctional Centre on 18 January 2007.

23: Bryan Michael Canavan, Matt’s father, gaoled with a colleague over a $1.6 million fraud against employer Nestle between 2001 and 2004.

Matt takes up a position with KPMG in Brisbane.

Matt becomes a director of the Productivity Commission.

1: Matt elected to the Senate for the Liberal National Party in Queensland.

Matt re-elected and appointed Minister for Resources and Northern Australia.

18: Maria, having seen news stories about two Greens senators’ citizenship problems, contacts Matt to tell him he could have an issue. Nationals leader Barnaby Joyce is informed.

24: Matt receives advice from Italian embassy, which confirms it processed an application form but it was not signed by Matt.

25: Matt resigns from cabinet as he seeks legal advice on his status. He tells reporters he is a “citizen of Italy” despite not having been born there or visited the country. He says he never received any correspondence from Italian authorities. Government’s preliminary legal advice says because the registration was obtained without Matt’s consent or knowledge he has not breached Section 44 of the constitution. Under Section 44 a person is disqualified from being elected if at the time of their election they are a citizen of “a foreign power” or otherwise have an “allegiance, obedience or adherence to a foreign power”.

8: Government to move Senate motion to refer the matter to the High Court.

So Matt Canavan thinks the job of Minister for Northern Australia is purely to support the mining industry. Says it all. pic.twitter.com/Ao9s6AK47a

The Canavan file: The curious case of a crime and a Senator becoming Italian