We’ve moved into an age of post-factual politics, where our leaders make up their own reality and expect us to buy it, writes Mark Chapman from Taxpayers Australia.

SO, THERE WE ARE.

After all the weeks of speculation and leaks, all the angst and all the heat, the Treasurer has finally spoken.

Frankly, it was an anti-climax — not least because what we got was almost exactly what we expected to get.  Despite promising surprises, the speech actually ran exactly as predicted and was exactly as feared.

Once again, the tired old clichés were dusted off and given another outing:

“end of the age of entitlement”

“doing nothing is not an option”

“a nation of lifters not leaners."

To be honest, I was slightly surprised to hear so many of these again.

Quite simply, hardly anyone believes this nonsense.

Everything Abbott and Hockey have said has made it clear that they are only ending the age of entitlement for those groups they don’t like and those groups who won’t vote for them. For the favoured few – the miners, the wealthy, the foreign owned media corporations – the age of entitlement rolls on and the government even throws a few sweeteners onto the pile (abolition of the Australia Network, cuts to the ABC and SBS, extra fuel subsidies to the miners, paid parental leave and now the promise of generous largesse to multinational drug companies through the new medical Futures Fund).

And all the polls, the public commentary, the seething anger in the community indicates that, as a nation, we can see this.  We can see that we are being screwed over and we don’t like it, not one bit.

Now, I’d assume Messrs Abbott, Hockey and Cormann are reasonably intelligent men and that they would see that their message isn’t cutting through. Naively, given that Smokin’ Joe kept assuring us (nudge nudge, wink wink) that we didn’t know everything that was in the Budget and that he had a few surprises up his sleeve, I assumed that there would be something in there to soften the pain — to demonstrate a real and genuine commitment to sharing that pain.

But no. What we got was exactly what the leaks told us we would get.

But if you’re wealthy or you run a large corporation, come on in, we’re open for business.

Yesterday, the day after the Budget, Cormann and Hockey were out patrolling the airwaves loudly proclaiming the fairness of the Budget and dismissing any suggestions of broken promises. Because now all we have is the ‘fundamental promise’ to fix the nations finances.

All those other ‘non-fundamental’ promises (no new taxes, no increased taxes, no changes to the pension, no cuts to health or education or the ABC or SBS) no longer count.

And we’re expected to buy this.

We’re expected to accept this insult to our intelligence and even thank the government for their largesse in helping to dismantle everything that makes this country a desirable place to live.

We’re expected to buy this Orwellian nonsense that a Budget loaded with assaults on the most vulnerable will help to build a better nation.

We’re even expected to accept that the politicians are helping with the heavy lifting as Mr Abbott − who enjoys a higher salary than the British Prime Minister or even the President of the United States − struggles by without a pay rise for a year, which will no doubt to be recompensed with a double sized rise next year to make up for any slight inconvenience.

And then, hidden in the Budget papers, is the final kicker.

A few weeks after we learn that $24 billion is to be spent on fighter jets, we learn that the Defence budget is to increase by 2%. Whilst every other department and authority of state takes a hit − including, tellingly, swingeing cuts to the massively underfunded corporate regulator ASIC − whilst the budget (if you believe the hype) spirals out of control, we can somehow afford a real terms increase in the Defence budget.

It’s now reached the stage where this crew have abandoned fact based reality altogether and appear supremely confident that they can sell us their analysis of a broken budget based purely on the proposition that if we say it’s true, then it’s true.

We’ve moved into an age of post-factual politics, where our leaders make up their own reality and expect us to buy it.

The evidence so far is that we’re not falling for it but I have to say, I’m nervous.

We have two more years of this and given that this Budget seems to have been only Stage One in their assault, I fear for where we’ll be by the time of the next election.

Mark Chapman is head of tax at Taxpayers Australia Inc — a non-profit non-partisan organisation providing advice to taxpayers. You can follow Mark on Twitter @mchapman_mark.

Hey Joe Hockey, I don't smoke or drink. I bring lunch from home and I take the bus. So, what's your point? pic.twitter.com/HzDFHU3ne2 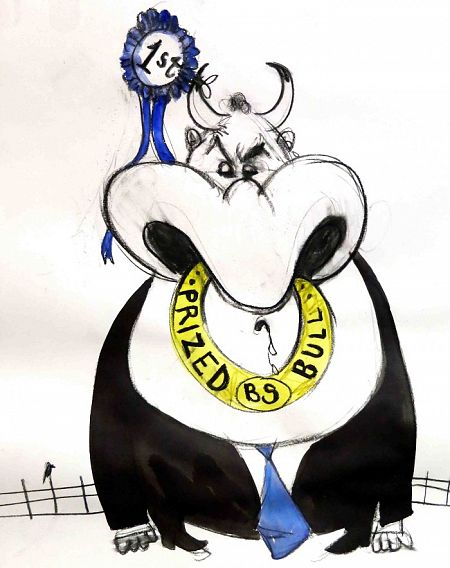 Doing your own tax returns soon to get simpler

10 August 2014, 9:00am The ATO is launching a new streamlined internet tax return service, which should ...

15 May 2014, 12:00pm We’ve moved into an age of post-factual politics, where our leaders make up their ...
Join the conversation
comments powered by Disqus
News updates