National broadsheet The Australian, reporting on the Federal budget on its front page today, declared its anti-Government bias in an unmistakable way — sacrificing the last flimsy shreds of its news credibility. Wil Wallace reports on the budget, Labor and the conservative press. 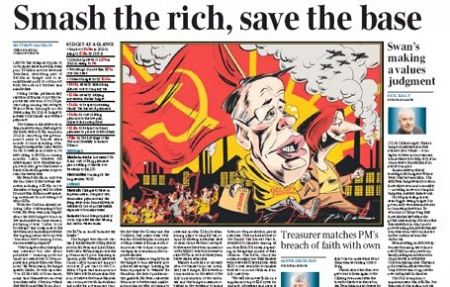 A part of the front page of today's edition of the conservative propaganda (broad)sheet - News Corporation's 'The Australian'.

The Labor Party has historically faced antagonism from much of the mainstream press — most often for not having the economic credentials needed to be trusted with the national balance. To conservatives, the government’s role is to place financial capital and security at a higher priority than social capital and security — their argument being that if the latter is lacking, it can be propped up through philanthropy and charity. As Labor often (though not always) places great importance on fostering social security – thus restricting the free market and redistributing wealth – it is not to be trusted in government, so the argument goes.

The Australian, this country’s most influential conservative newspaper, has always maintained a close relationship with the conservative parties. Lately, the veneer separating The Australian’s staff and the Coalition has been found rather thin — as The Australian quite clearly assisted Opposition frontbencher Christopher Pyne’s efforts to oust the Speaker, Peter Slipper, and the paper’s Foreign Editor, Greg Sheridan, found himself tangled up in an impromptu action from gay rights activists against Tony Abbott that interrupted their dinner during the latter’s recent visit to Melbourne.

When the Coalition attacked Labor over the mismanaged Pink-batts programme, The Australian was there. Likewise, it was on the case day-in day-out when the Coalition spent 18 months accusing the Labor Party of rorting the Building the Education Revolution scheme — something an independent taskforce showed to be entirely without substance. Underlying these campaigns was that characteristic criticism of Labor as being financially irresponsible and economically inept.

Prior to the Global Financial Crisis this “Axis of Conservatism” lambasted Labor’s lacking economic credentials (as epitomised by the “L-Plate Latham” campaign during the 2004 election). When Kevin Rudd was elected in 2007, the Axis was savvy enough to use the new government’s huge spending commitments as evidence of Labor’s inherent profligacy —ignoring the simple fact that after 11 years under Howard, and with the international economy crumbling, Australia needed more than just a lick of paint to be brought up to scratch.

Post-GFC, the Coalition and The Australian re-focused their efforts on criticising the ALP’s commitment to return the country to surplus by 2012-13, on the grounds that spending commitments and the international financial scene would not permit it. I wonder whether they were surprised when Mr Swan announced a projected $1.5bn surplus for 2012-13 as part of the 2012 Budget Speech.

Whatever the emotional response, The Australian has been quick to change tack upon announcement of the surplus; within a few hours of the Budget Speech the front page of The Australian’s website was updated with a prominent cartoon of Julia Gillard and Wayne Swan (in an “Occupy Treasury” hoodie) striding forward under a hammer and sickle banner — the backdrop a clear allusion to Soviet style propaganda. An article entitled “Smash the rich, save the base”was the first under the cartoon, and it described the Budget as an “unashamed push to reconnect with the nation’s battlers and middle class”. Following that was an op-ed from Dennis Shanahan, who accused Mr Swan of using “capitalism to save socialism” — a confusing statement made all the more ridiculous by it referring to an article written by Kevin Rudd – on faith in politics – as an example of using “socialism to save capitalism”.

Oddly enough, Andrew Bolt’s brief response to the Budget was mostly accurate: it is largely an effort to prevent a drubbing at the next election and to mitigate what one would expect to be a brutal campaign waged by the Axis when the Carbon Tax comes into effect.

What makes this criticism of the 2012 Budget most absurd is that it is hardly a “Robin Hood budget”, nor is it accurate to say it is geared towards the most needy. The giveaway should have been in the Government’s choice to resurrect that most deceptive and insidious Howardism — the “Battlers”.

As Wilson and Turnbull discuss in their paper, “Wedge Politics and Welfare Reform in Australia”, John Howard used the “battlers” metaphor to cut welfare provision to vulnerable elements of the community while maintaining public support. In doing so, he reintroduced the concepts of the “deserving” and “undeserving” poor to a level that had not been seen since the dark days of the 1930s. The Government’s choice to describe the Budget as one for the “Battlers” plays directly into this and is indicative of the regressive social policy contained within.

As the number of retrenchments in the eastern states skyrocketed during the first quarter of 2012, articles gradually emerged in the mainstream press about the poor living conditions of Australia’s most needy. Particular attention was given to the unemployed as it was revealed that the decision to severely restrict welfare payments (to provide an incentive for the unemployed to find work) meant that Newstart recipients were unable to meet the cost of living without going into debt. ACOSS, the Australia Institute and The Greens all spoke out about the inadequacies of welfare payments, calling for the Government to increase payments by at least $50 a month to relieve the pressures faced by the unemployed.

One would rightly expect that a Labor treasurer, during a period of sustained retrenchments, would act to support the unemployed and move to create greater employment. Perhaps Mr Swan’s speechwriter did not realise that justifying welfare cuts to make sure the unemployed would “go back to work” was tantamount to labelling those workers whose employment had been sacrificed to greed and profit as part of the “undeserving poor” —  the “bludgers”. While not as obvious as Joe Hockey’s attack on welfare recipients’ “sense of entitlement”, it is nonetheless in a similar vein.

In the eleventh hour before the budget announcement, the Government leaked details of payments for low and middle-income families with boosts to the Family Tax Benefit A and some welfare programmes. When the Budget was announced, extra measures to redistribute wealth were announced: the removal of tax concessions on Super contributions and (some) termination payouts for high-income earners, as well as reforms to non-work income of minors to prevent parental tax dodging (or bludging, as it were).

This appears to have mostly distracted the media from reporting on the important and targeted cuts to vulnerable groups in the community. As well as failing to grant a rise in Newstart as suggested by ACOSS et al., the Government has decided to revoke parenting payments to unemployed parents with unemployed couples losing the benefit on the child’s sixth birthday and single parents losing it on their eighth. For single mothers, who undoubtedly comprise the vast majority of single parents, this is an additional burden on an already susceptible section of the community.

The decision to sacrifice the social security of the needy to post a surplus is evidence of Labor’s abandonment of traditional values (contrary to their claims the Budget supports them) and of moral bankruptcy on the part of our country’s economic planners. The only people demanding an immediate return to surplus are the conservatives and it is to the chagrin of the entire labour movement that the ALP has decided to play their game. Prioritising financial security to the detriment or destruction of social security has devastating effects on the less fortunate and, as the riots in Europe show, can have catastrophic consequences.

Though my confidence in the matter wanes daily, I still believe the Labor Party is the lesser of two great evils. A Coalition government, whether led by Tony Abbott or any other, still seems to me to pose a greater threat to Australia. However,  the Labor Party also deserves constant, and harsh, critique.

(This story was originally published on Wil Wallace's blog redSTACHE.) 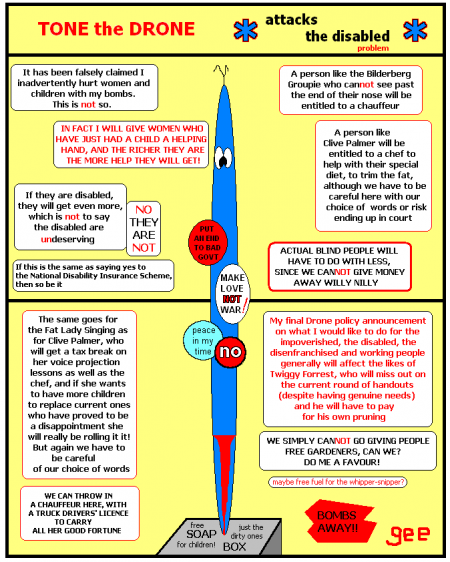 9 May 2012, 6:07pm National broadsheet The Australian, reporting on the Federal budget on its front ...
Join the conversation
comments powered by Disqus
News updates