On behalf of the newly formed Billy Tea Party, our contributing editor-at-large, Tess Lawrence, gives voice to a growing chorus of disgruntled Australians who are demanding to see Prime Minister Julia Gillard's birth certificate. If she can't prove that she was born outside Australia, they say, then she must resignat once.

On behalf of The Billy Tea Party here in Oz, I demand that Prime Minister Julia Gillard prove to Australian citizens that she was born overseas as claimed.

It is not good enough merely accepting her word on this.

I am not one for conspiracy theories but I cannot ignore the vent of hearing when loud rumour speaks.


Informed sources confirm that Julia Gillard was in fact, born in Australia and not in the unlikely named village of Barry in Wales, said to have been the original inspiration for Lerner and Leowe's Brigadoon.

These sources claim Ms Gillard has failed to produce an authentic birther certificate. Was she in fact born at all? Has she got a belly button?

Forensic examination of documents filed with the Australian Election Commission under the Freedom From Information Act reveal only two documents were filed as proof of birth and identity.

These include worn Fantales and Minties wrappers and an old Bulletin cover proclaiming 'Australia for the White Man'.

As Supposition Leader, Tony Abbott points out, these wrappers could have been found in the pockets of any old suit in any old opp shop across the land.

He said he didn't know what I was 'going on about' in relation to The Bulletin. 'What's your point?' he pointedly said. 'Good point,' oinked Deputy Supposition Leader, Julie Bishop.

However, rabid republican and Independent Australia chief correspondent Barry D'everingham, after whom the ancient Welsh village was in fact named, challenges this.

TO STAR IN RAP VIDEO 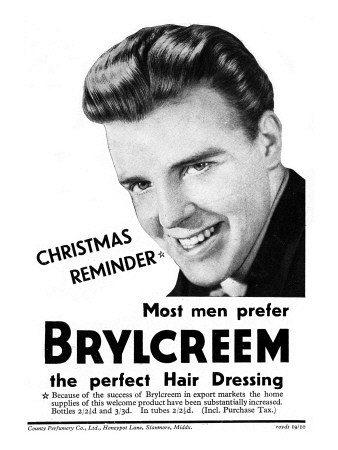 'I have never found a single Fantales or Minties rapper in any opp shop suit. And I can assure you that despite having a close association with someone who is a big noise in opera, I absoloooootely adore rap music and what is more, intend to produce a fundraising rap video myself, called

'Brylcreem Your Genes' featuring myself singing a song that I wrote myself, playing that time-honoured carbon neutral instrument – the comb organ – that I made myself, featuring papier I made myself and using an old comb that I did find in an old suit, one of mine actually; the Brylcreem between the teeth will magnificently temper the notes and tone.'

(It is unclear what teeth D'everingham was talking about; the teeth he takes out at night, or the teeth on the comb.)

'Now that's enough about me. What do you think about me?' said D'everingham who is preoccupied with the Wedding Royal and doing more media interviews than Alistair Campbell's mirror.

Several locations in Australia have already been mooted as possible birthplaces for Ms Gillard, among them Nar Nar Goon (Gippsland, Victoria and Indige/Welsh codex for Brigadoon) and Bagdad (Tasmania, codex for Bagdad).

Victoria itself, it must be remembered, was named for that Great British Queen and Empress of India. The Great Queen's profile bears a remarkable resemblance to Ms Gillard.


However, longtime Gillard admirer Liberal Senator Bill Heffernan who has spoken famously and longingly of Ms Gillard's willfully barren womb (I too have a womb that is little better than a vacant lot) feels that the Primed Minister's real birthplace is in fact another wee town in Victoria, known as Barrys Reef, not far from the quaint village of Blackwood.

It is believed that this is where the confusion over Ms Gillard's birthplace first arose.

I share Billy's opinion about Barrys Reef (as in gold, not coral).

Barrys was named for the hapless chap who was exiled from Blackwood after a drunken fracas and who staggered away from the village in disgust to set up digs close by.

For a while it was all happening at Barry's place.

After doorknocking on a number of doors in Blackwood during the Easter/Passover holydays, the mere fact that not a single one opened unto me, is proof enough that the neighbourhood has gone into lockdown and protecting their Julia in much the same way as did Kate Middleton's (middle town) dear little picturesque village of Bucklebury My Heart on Bended Knee (a temporary deferential honorific to Prince William to encourage local tourism at least until the tea-towels run out).


WHERE IS THE AUSSIE EQUIVALENT OF THE DONALD?


However, we of the Billy Tea Party will not be deterred and are now actively seeking an Australian equivalent of The Combover.

In Casino City (and we have several in Oz) there has to be a Trump card to be found. Unlike the British Monarchy's first girl-child rule, we are not gender maligned. You don't even have to have one.

The Donald can just as easily be The Donna. Or The Madonna if you're a wee bit bonkers. Or a Duck. Yes, a Duck would be nice. Or a Duckette.

You must be able to mouth off and be a dead-set media whore (why do people constantly bad-mouth whores) and I mean this is the worst sense of the word. Media that is.

You must have pots of moola and have a commanding presence that will overshadow any Supposition Party candidates. Well, that last part is easey peasey.

Like it or no, Donald Trump has rightly claimed responsibility for forcing President Barack Obama to hold an unscheduled Press Conference to present his Hawaiian Birth Certificate to the World.

The Tea Party and the Birther agitators under whose crinolines the Republican Party has been squatting, has tried for months to nail Barack Hussein Obama as a closet Muslim and a closet African-born American and as such preclude him from the Presidency, since one has to be born in the USA to hold Presidential Office.


AUSTRALIA'S DIFFERENT, HERE, YOUR OWN MATES KNIFE YOU

Australia differs in this regard. You can be born anywhere and assume Prime Ministership.

As long as your own political factions don't knife you in the back, that is — the enemy within, and all that.

The Donald is still posturing about entering the presidential race. A terrifying prospect, given that he's an alumni of the Dubya, Cheney, Rumsfeld Guniversity of Lies and WMD and believes in invading countries and simply taking their oil. Nice one.

Naturally, Trump was asked to produce his birth certificate. But he goofed and produced the wrong document. Now he has provided the correct certificate that establishes that he too, was born in the USA. Bad luck America.

The thing is, although it is doubtful that the so-called 'birthers' will cease their relentless attempts to usurp Obama outside of the ballot box, their campaign continues to leak muddy spillage on Obama's 2012 bid for a second term.

Because neither the Republicans nor the Democrats for that matter, have any coherent alternatives to Obama on this day, much of the potential for serious damage has been like spent seed upon the ground.

Democracy is best served when candidates are of strong and equitable calibre. Otherwise we get what we have in Australia.

DEGRADATION OF THE IMPORTANCE OF THE INDEPENDENT CANDIDATE

Holding pattern politics. Indifferent. Diffident. And an utter diminution and degradation of the importance of the Independent candidate.

The electorate will be forgiven for overlooking any Independents in the next Federal election.

We may not be as fussed about Birth Certificates in Australia as they are in the USA — or particularly care where the mothers and fathers of our politicians were born.

But one thing is for sure — the Death Certificates inevitably to be issued for this most desultory dysfunctional Government and this Parliament will have to cite parentage from both and all sides of the House.

They will bastardise us all with their denials. And we should be glad for it. But their DNA is all over these winters of our discontent and no glorious summer is yet made.