Team Australia's Captain wants your passport — but has he the wrong'un?

There's a whiff of hypocrisy about our PM wanting to strip Australians of their dual citizenship whilst refusing to prove he didn't break the law when he nominated for the House of Reps. ​ Willy Bach questions Abbott's double standards including giving the nod to Australians holding Israeli passports who go off to fight with the IDF.

LIKE THE Prime Minister, I was born in England. I don’t hold that against him. Perhaps it would be better if we discarded all this tribalism, dispense with nationality, flags, passports. But wait! Tony Abbott is wedded to flags, four, six, eight — who can keep count? He bangs on about “our people” and “enemies” all the time. It is called chauvinism and xenophobia (which Pauline Hanson couldn’t pronounce). Oh, and he’s made a career of it, hasn’t he!

I read David Donovan's article and thought he has a point. Tony Abbott has a case to answer regarding his alleged dual nationality and has shown no publicly acceptable reason for his continued avoidance of the question. Basically, if you are in the right, give the truthful, straightforward explanation and move on. He won't. It is costing him credibility. Tony's Tradies will evaporate!

Not only was Tony Abbott required to "take steps" to "relinquish" his British Citizenship to become PM, he was required to do this to become a candidate for the House of Representatives in 1994, (twenty-one years back) when filling out the declaration regarding Section 44 on the AEC form. If he was not telling the truth, there will be multiple charges to answer.

Declaration to be signed by candidate

The steps actually taken could have been to request the appropriate form from the British Embassy and then to pay their punitively exorbitant fee, which has grown out of proportion to its implementation costs since 1994 (even Australia's Big Four banks would blush).

At this point, it becomes typically opaque as to whether something actually happens and who is responsible for checking that it was done. Well, the candidate is personally responsible for this, in any case. The party agent won't be going to prison. But there are precedents where elected MPs have been challenged in court, have been declared ineligible to take their seat and have been charged with serious offences against the Australian Electoral Act, which carries a custodial punishment. Terry Sharples of One Nation was charged in the Queensland Supreme Court in 1999. Margo Kingston reminded us how this happened. Tony Abbott was one of those who plotted the funding of Sharples’ downfall:

I would never have picked Tony for dreaming that up, but the Prince Philip gong was awesome wasn’t it.! 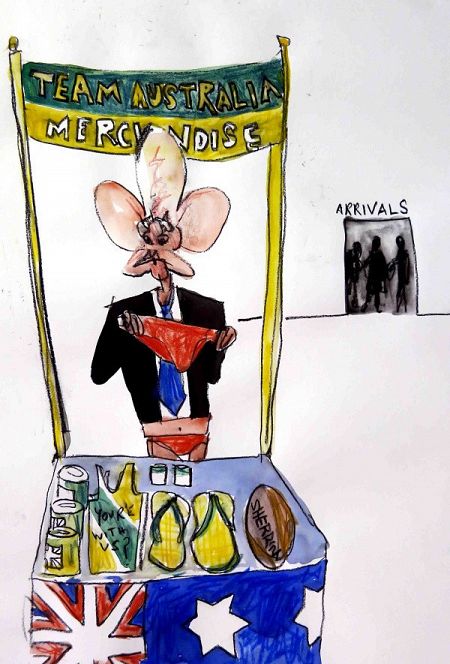 So, what is wrong with having two or more passports? Ben Zygier had four, three of which were Australian but in different names, all of which ASIO would have known, since he was a MOSSAD employee. They did nothing.

David Hicks was carrying an Australian passport when he decided to join the Taliban's military training school. After his many years of torture in Guantanamo at the hands of our compulsory ally, his conviction was overturned. He is a free man living in Australia. What an error in law it would have been if the Gillard government had cancelled his passport as they threatened.

Now we have over 100 Australian passport holders allegedly joining ISIS, but we don't know if they are tending the wounded, feeding refugees or actually engaged in fighting. It is unlikely they would be fighting regular Australian troops, though they could be fighting our SAS, who might be dressed as Shi-ite militias. The Abbott government, famous for vacuous stunts, will not be concerning themselves with nuanced questions like that, will they?

We also have hundreds of Australian dual Israeli passport holders visiting Israel each year to perform Aliyah. So many that DFAT don't bother to collect data on this flow of young people. Why not? An accountable government needs this information and should be able to answer the question. Joining the Israel Defense Forces (IDF) means being deployed to tasks in the military occupation of Palestinians and possibly carrying out those tasks in ways that violate the Geneva Conventions, as Peter Slezak explained to the ABC’s Presenter, Kirsti Melville.

‘…shocking new allegations by IDF personnel and their behaviour against Palestinian children. [Remarkably even] Murdoch’s Australian also covered the revelations.’

Australians, quite frankly, including our political class, need to stay up to date, not rely on shibboleths of the past. Check Breaking the Silence — straight from IDF whistle-blowers. We should know this to be the case. The recruitment propaganda for the IDF is shamelessly crude, complete with childish ‘scary’ pictures, but the IDF shares some “clever” touches with certain other armed forces in the Middle East. Max Chalmers wrote about this aspect in New Matilda

Former senior public servant, John Menadue, had this to say on Australians joining the IDF: ‘Australians have fought in all of Israel’s wars since 1948…The Muslim community in Australia has been very critical of Australians who go and fight under the IS flag but rightly asks why Australian citizens are able to fight with the IDF but not with IS.’

We should stop and think about this.

Recently I watched a young Muslim woman in Glasgow in Scotland explain on TV that she and her family sat around their TV each night fuming with anger at the disastrous outcome of George W. Bush, Tony Blair and John Howard’s wars against the people of Afghanistan and Iraq and Israel's war crimes in Gaza. She also mentioned the deafening silence of our politicians — and it is that. People like Tony Abbott and Bill Shorten should know what conscience means. The young woman in a Hijab could have been speaking from Mt Druitt, or anywhere. So, our Australian IDF recruits are contributing to a generalised sense of injustice which is perfectly understandable and making an IS-inspired terror attack on Australia more likely, not less likely.

So, how many passports do you have, Tony? Tell us, do!

You can order John Graham's original cartoons including the one above from the IA store.

Overcoming authoritarianism: Who would you like to grope your kids’ brain?

Team Australia's Captain wants your passport — but has he the wrong'un?

4 June 2015, 9:00am There's a whiff of hypocrisy about our PM wanting to strip Australians of their ...
Join the conversation
comments powered by Disqus
News updates