THE CEO of one of the nation’s biggest aged care operators has told a Senate Inquiry that she is aware that her company is domiciled in a tax haven — but says she’s unable to provide any more information because she’s new to the job.

TriCare CEO Kerin McMahon fronted the Senate Select Committee on Job Security on Wednesday and was grilled over her company’s practice of “diverting money to a tax haven” while its residents and staff were “quite frankly, shafted”.

McMahon deflected or took “on notice” many of the questions, on several occasions citing her relatively brief tenure as TriCare CEO as the reason she was unable to respond.

McMahon became CEO of TriCare in May, according to her LinkedIn profile.

She has until 11 August to provide the Committee with written responses to the questions taken on notice. 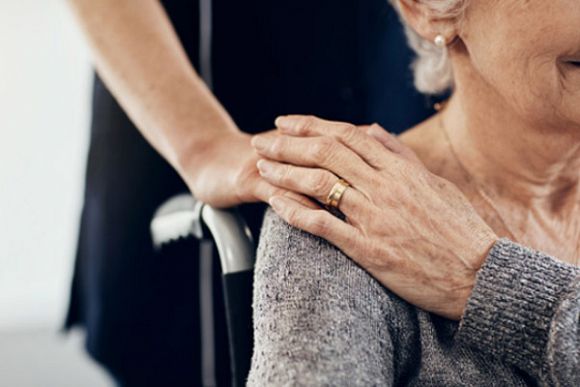 The Federal Government isn't doing enough to adequately look after our elderly and reform in aged care is urgently needed.

In the year to 30 June 2020 (the most recent figures), TriCare received $103 million from Australian taxpayers, representing the overwhelming majority of the company’s total revenue.

As previously reported by The Klaxon, TriCare is domiciled in the tax haven of Norfolk Island, despite the group having never operated a single bed there.

TriCare operates only in Australia and its headquarters are located in Mt Gravatt, Brisbane.

The $103 million TriCare received from Australian taxpayers in 2019-20 was substantially more than Norfolk Island’s entire GDP, which is around $70 million a year.

(TriCare’s operations are not included in Norfolk Island’s GDP, given TriCare doesn’t have any actual operations there.)

Alongside its tax haven status, TriCare has been in the spotlight amid allegations of systemic improper practices and serious elder abuse.

In an exposé by The Klaxon last year,Kylie Kilroy,then a resident of the TriCare Toowoomba Aged Care Residence in southeast Queensland, blew the whistle on the alleged improper practices.

Kilroy was removed from the facility within days of speaking out.

At Wednesday’s hearing, Sheldon asked McMahon whether she was aware that TriCare Group was registered in Norfolk Island.

“I am aware and I believe that’s in the public domain,” McMahon replied.

“Could you explain why a company receiving over $100 million from the Federal Government to provide aged care services is domiciled in a tax haven?”

“I don’t feel that’s fair, a fair question to be asked in this environment, particularly with my prior comment around how long I have actually been employed here.

Under questioning, the TriCare boss said she had been unable to determine how many TriCare staff members had received both COVID-19 vaccination shots.

However, McMahon said “about 25%” of staff had received at least one vaccination dose. 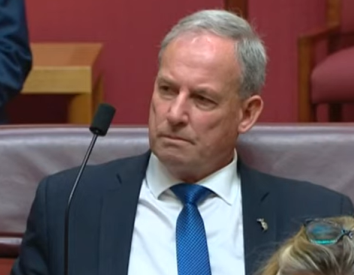 Across Australia, 32% of people have received one COVID-19 shot (and 14% are fully vaccinated) meaning TriCare staffers are being vaccinated at a slower rate than the general public.

McMahon said she was “not aware” of how many employees had received both COVID-19 shots.

She told the Committee:

“I’m not aware — it was one of the questions I asked yesterday but haven’t received answers back as yet.”

In June, Prime Minister Scott Morrison announced all aged care workers would be required to have at least one shot by mid-September.

Yet the Federal Government, which has failed to secure adequate vaccine supplies, has failed to state how this requirement is to be achieved, or how non-compliance will be policed.

In the 2017 financial year, the brothers, both TriCare directors, were the second biggest donors to Queensland’s LNP, each “donating” $35,000 cash to the Party.

TriCare CEO McMahon was asked whether she was aware that TriCare was owned by one of Queensland’s richest families, whose members were major LNP donors.

“The directors of the organisation are obviously my direct employer, so yes I am aware of the O’Shea family.

I’m not sure how that relates to the inquiry, per se, around job security.”

Committee Chair Sheldon said the matters were relevant because of high levels of concerns around job security among aged care workers, particularly given many major providers had been laying off staff in recent months.

TriCare and John O’Shea have repeatedly declined to comment when contacted by The Klaxon.

Sheldon also quizzed McMahon regarding the circumstances around whistleblower Kilroy and her concerns about resident abuse at the Toowoomba TriCare facility:

TriCare received more than $6 million from taxpayers for that specific facility, which across 81 beds is about $75,000 a bed... plus whatever resident fees are charged.

I quote Ms Kilroy who said ‘some residents aren’t getting showered, some are going a week without, those who are capable of changing their own incontinence pads are being left without pads to change into. Residents are being left in tears being unable to change’.

“Ms Kilroy raised complaints, rather than address the issue, TriCare moved her to another facility. This evidence came from investigative reporter Anthony Klan in August 2020.” 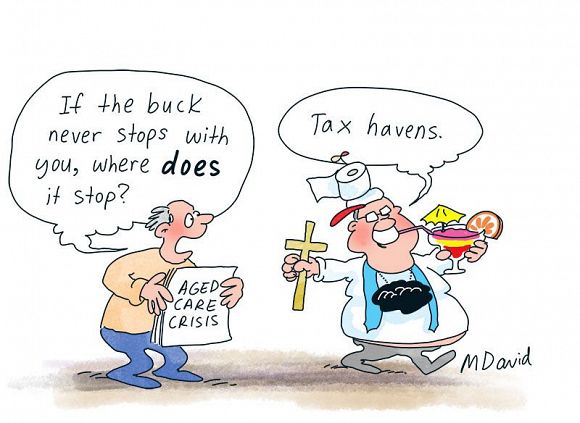 Our under-resourced aged care system could implode unless the Coalition provides more robust funding to meet the health needs of older Australians.

He then put another question to the TriCare CEO:

“Doesn’t this sum up the issues in the aged care sector — that we have a company receiving $100 million in funding, diverting money to a tax haven, while staff and residents get, quite frankly, shafted?”

All I can respond to in regards to that, that’s not a question per se, so I’m not really quite sure what the question was.

My only comments, in reviewing those issues and complaints made by that particular individual [Kilroy] are that, obviously, the Aged Care Quality and Safety Commission have actually reviewed all of those concerns.

At this point in time that is a service [TriCare Toowoomba] that is considered to be fully-accredited and compliant with required standards with regard to quality of care.

Serious concerns have been repeatedly raised over the operations of the Aged Care Quality and Safety Commission (ACQSC), the Federal Government’s aged care regulator.

After The Klaxon reported Kilroy’s concerns in August last year, they were contacted by a group of distressed nurses and carers from the facility.

“As staff, we can confirm that what Kylie Kilroy stated is 100% correct.

We are all extremely disgusted and angry at the way the residents and staff have been treated.”

The TriCare Toowoomba nurses and carers warned that ACQSC inspections were being routinely gamed, with operators being forewarned of inspections.

TriCare was “inspected” by ACQSC on 5 August last year – two days after Kilroy blew the whistle on the facility – and the nurses and carers said TriCare management had been pre-warned the inspectors were coming.

“As was expected, TriCare rostered for the day,” the TriCare Toowoomba staffers told The Klaxon:

“The facility had been cleaned and polished, fruit in fruit bowls etcetera and staff had been prepped in a meeting with instructions that they were to ‘look happy’.”

In May last year, a detailed report by the Tax Justice Network Australia and the Centre for International Corporate Tax Accountability and Research (CICTAR) found TriCare appeared to be using Norfolk Island to engage in ‘financial engineering’ to ‘reduce any income liability’.

‘A key objective appears to be to shift profits, equity and debt to minimise tax payments.’

Because it is based on Norfolk Island – and so files no financial statements – there was ‘no way of knowing what tax payments, if any, are made by TriCare Group Pty Ltd’. 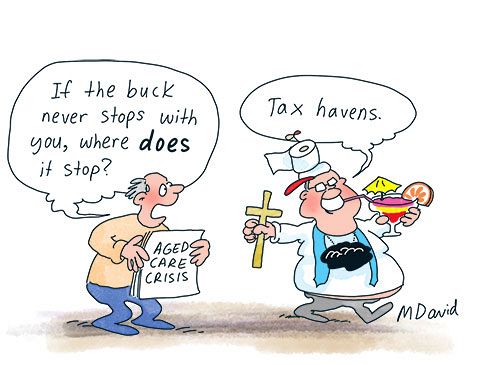 The author of the report, CICTAR principal analyst Jason Ward, says concerns about TriCare’s tax haven status were officially raised over a decade ago, but that nothing had changed:

That they were running the company through Norfolk Island was raised in a Senate Committee way back in 2009, and it’s still set up that way.

It was flagged as an issue of concerning 2009 in the Senate, I raised it in my report [and] it was raised again by [The Klaxon].

It seems there’s this idea that ‘okay, that’s what rich people do, they set up businesses in Norfolk Island and donate money to the Liberals’.

TriCare has said it is not using its tax haven status to avoiding paying tax or engage in improper activity.

That raised the question — why would TriCare continue with the practice if everything was above board?

TriCare has repeatedly declined to respond when approached by The Klaxon regarding its corporate structure.

One of the most pressing problems facing the aged care sector, according to experts, is extremely poor financial transparency of major operators.

This means that despite the sector collectively receiving billions of dollars a year from taxpayers, the public – and the Government – are left largely in the dark regarding how that money is actually spent.

There have been repeated calls for Federal Government to substantially lift reporting requirements in the sector, though no changes have yet been made.

On Wednesday, TriCare CEO McMahon put the issue back on to the Federal Government.

She said it was “important” that publicly-funded companies made proper financial disclosures — but only to the extent that they met the minimum requirements set for them by the Federal Government:

“I think it’s important for all operators who are in receipt of government funds, particularly [those providing] essential support to vulnerable people, to comply with any reporting requirements that are imposed on them by the Government.”

CICTAR’s Ward says the recommendations made by the recently completed aged care Royal Commission, which was “scathing” of the sector, presented a “massive step in the right direction”.

But financial transparency in the sector needed to be improved immediately, before any more money was given to operators.

Kylie Kilroy was moved out of her aged care home after sharing photos of the “gross” meals she was served. But it was just the tip of the iceberg of what she claims made her hit “rock bottom”.
📍 DETAILS: https://t.co/LWGkBQEC46#AgedCare360 pic.twitter.com/LQRzMwpmPs