“Now, politics is a battle of ideas.  That’s what it is and it’s what it should be, and we believe our ideas are superior to theirs, again without prejudice, and our job is to present our ideas in the best possible way….

And whilst $50,000 or $60,000 to two candidates is a lot of money by community standards, I appreciate it, if the Labor Party gets a foothold, I’ll have to spend a lot more money defending our ideas than that!”

Such was the closing statement of Federal Liberal National Party MP Stuart Robert’s testimony during day one of the Queensland Crime and Corruption Commission (CCC) public hearing on Tuesday, 18 April 2016.

The public hearing forms part of Operation Belcarra, an investigation into the conduct of candidates involved in the 2016 Local Government Election for the Gold Coast City Council, Moreton Bay Regional Council and Ipswich City Council.

This defining statement by Robert provides further substance to the public outcry that Kristyn Boulton and Felicity Stevenson hoodwinked voters by promoting themselves as "independent" candidates with no political ties despite having their campaigns being directly, secretly bankrolled by the LNP.

Is it really the paranoid assertion of Labor gaining a foothold through the 2016 Local Government election that motivated Robert’s involvement?

Interestingly Robert testified about his rationale for the donations, claiming: “Penny Toland, was now running for the Labor Party” in reference to my mayoral candidacy. In reality, ECQ disclosures clearly showed no donations or gifts in kind from the Labor Party.

Indeed, in the next breath, Robert himself conceded that it was correct Labor had not endorsed any candidates. 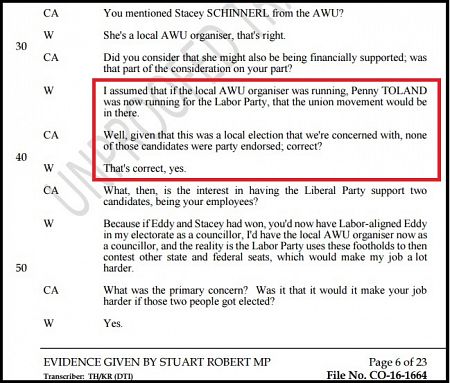 Robert, a Federal member of Parliament, has also denied under questioning having anything to do with local politics:

"If I may, sir, local politics is not my thing. As a general rule, if you play on someone else's turf, they'll play on yours, so I just don't get involved."

Despite such protestations, his actions quite clearly reveal a very different reality.

In 2013, Robert sought to have the then Assistant Planning Reform Minister Rob Molhoek call in a planning application on behalf of a developer who later donated to Robert’s re-election campaign.

Then, in 2015, Robert wrote to the Gold Coast City Council CEO regarding the controversial Sunland Development (which was undergoing Council assessment), stating:

“The city is deserving of a project of this quality and it has my full endorsement.”

The lead lobbyist for Sunland, Simone Holzfapl, who also appeared at Tuesday's hearings, must have been pleased to hear such a glowing endorsement. Holzfapl declared a "personal" contribution of over $100,000 to LNP slush fund, the "Fadden Forum" — something the CCC neglected to ask her about on Tuesday under oath. This was a baffling oversight by the CCC, given allegations raised in Federal Parliament last year that Holzfapl may have been using this mechanism to funnel undisclosed donations to the Liberal Party from her developer clients.

Fast forward a few months and we again see Robert take steps to influence local government, this time through organising a meeting with Boulton and Stevenson to reveal his intention to seek approval for the LNP fundraising arm known as the Fadden Forum to provide financial support to their respective campaigns.

Actions confirmed by Robert in his own testimony before the Commission: 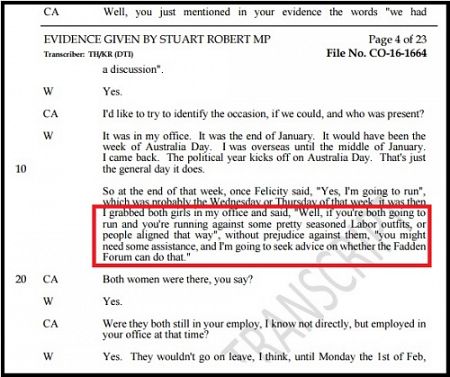 Roberts also appeared to have selective amnesia, claiming under oath on Tuesday that he'd had no communications with them all all during the campaign:

"I didn't speak to them at all during the campaign, like, during the whole campaign. So whatever conversations we had before they left would have been the last ones until such time..." 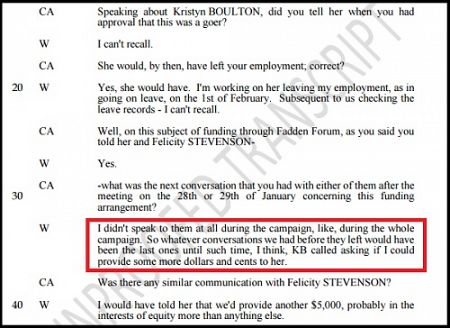 It had seemingly slipped Robert’s mind that time he made a public speech in support of Boulton on 19 November 2015:

... and had officially launched her campaign on 28 November 2015 — both events proudly shared by Boulton and Robert on social media.

A long-time former employee of Robert, Boulton’s questioning was squarely aimed at her knowledge of LNP funding and her general involvement in the LNP. What followed were responses that significantly downplayed her LNP ties and feigned ignorance of its fundraising activities.

For instance, when questioned about the source of her campaign funds via the now infamous Fadden Forum, Boulton bizarrely claimed to be

“... at the bottom of nowhere, I still don’t understand how it all relates to one another.”

These claims were, by days end, spectacularly shot out of the water by her former boss' testimony.

When voters questioned her about any ties to Robert, she said she

"... never shied away from that fact that I was working for a Federal member of Parliament. In fact, I'd tell people, you know, I've served two apprenticeships under him."

Upon seeking further clarification about this statement from the Commission, Boulton replied:

"I was talking about the eight years. You know, an apprenticeship is four years.” 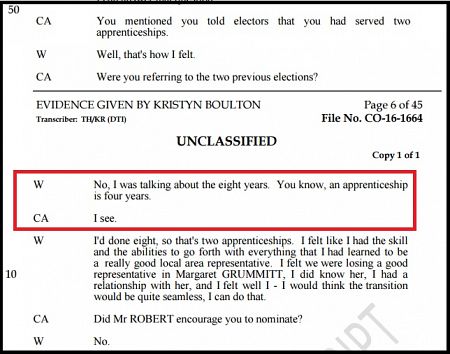 One has to wonder as to the terminology chosen here. What is more palatable to a non-LNP supporter? Nine years as the electorate officer to a Federal LNP member, or merely “two apprenticeships”?

Further examination of Boulton’s interaction with voters focussed on the claim of “independence” and inclusion of the term “independent candidate” in campaign materials.

“... otherwise it would be assumed, I would think, that there’s no party politics in council and we’re all independents.”

Minutes later, Boulton contradicts this statement by highlighting that she had previously run and lost when running under a “party political ticket” in 2008.

The questions that followed honed in on Boulton’s knowledge about the LNP contributing the lion’s share of her campaign funds. Boulton outlined how the $30,000 in question was deposited in three tranches. While Boulton conceded the hardcopy of her campaign account bank statement, which was submitted as evidence, identified the source for the first two deposits as 'LNP donation' and the final deposit as 'LNP/Fadden Forum', she said that during the campaign she had only done “phone banking”, which meant she has not seen that the money coming into her account had come directly from the LNP, rather than Robert.

Boulton went on to explain that she did not view any bank statements until after the election. 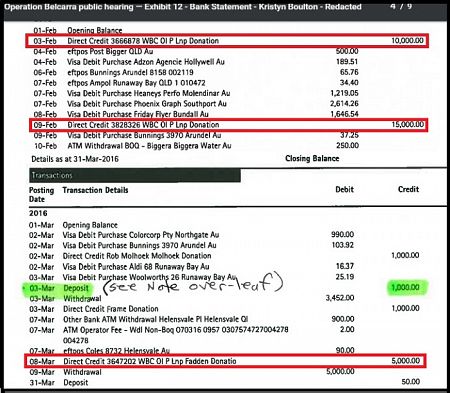 Boulton later carefully outlined for the Commission, the process she undertook to finalise her Electoral Commission disclosure return. The process included generating a handwritten summary/ledger of campaign contributions.

Boulton explained that the creation of the handwritten summary was

“... to make sure in chronological order, from the start of the campaign, checking off the bank accounts and Horace's version of the summary, going through and making sure that I didn't miss anything.”

In relation to the donations in question, Boulton was asked whether she noticed the three donation entries at the same time, or the third donation later?

A quick look at the handwritten summary/ledger (partially reproduced below from the submitted evidence) does raise a number of questions: 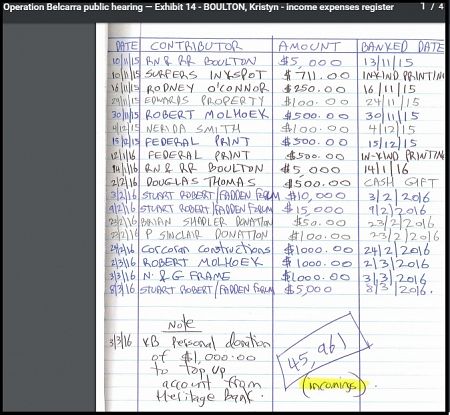 Firstly, why did Boulton use the descriptor 'Stuart Robert/Fadden Forum' for the donations, rather than the descriptor from the bank statements she claimed to have used all at one time to complete the ledger?

Secondly, why 'Fadden Forum'? Boulton said she did not speak to Robert until after she had completed the handwritten summary and it was at that point she said she was “surprised” to find out the source of the donations. When asked whether she added "Fadden Forum" before or after speaking to Robert, Boulton replied that she could not recall.

Lastly, why did Boulton change pens over ten times while completing the ledger? She claims it was being taken directly from the bank statements, therefore seeing the source of all three donations at the same time, so why the itchy switch?

While Boulton struggled to recall the finer details of the Fadden Forum revelation, Robert suffered no such lack of clarity. The ignorance pleaded by Boulton was firmly blasted out of the water by him as he described in detail the occasion that Boulton attended a meeting with him and fellow candidate Felicity Stevenson in his office in late January. There he told both his then currently employed staffers that he would seek approval to use funds from the Fadden Forum to assist their respective campaigns.

When asked specifically of her recollection of this meeting, Boulton once again stated: “I don’t recall.”

“No, it would be hard to be in my office for such a long time and not understand how we raise money for the Liberal National Party.”

Strangely, Boulton’s failing recollection of all things Fadden Forum did not extend to not recalling its postal address, as revealed by Robert as he read out a private text exchange between himself and his former offsider.

In reference to completing her disclosure form, Boulton texted: 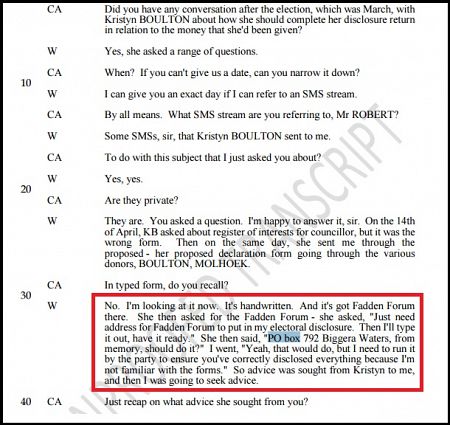 With fellow recipient of Fadden Forum support attending the hearing still to come, the testimony of unsuccessful candidate Felicity Stevenson will be most interesting indeed.

Only time will tell if the curse of selective amnesia continues.

CCC's Operation Belcarra continues next week, with the next round of witnesses from the Gold Coast, including controversial Gold Coast Mayor Tom Tate, appearing on Wednesday 26 May 2017. For more information click HERE.

Penny Toland is a scientist, lawyer and former Gold Coast mayoral candidate. You can follow Penny on Twitter @PennyToland.