So much for Christmas cheer

Under the Abbott government, Australia is now a cruel, mercenary and pessimistic country. Author Jennifer Brassel reflects on the battered psyche of the once 'Lucky Country' and urges us all to embrace the true 'spirit of Christmas'.

I'M NOT religious and never have been. Christmas in our house was about family getting together, even if only once a year, exchanging gifts, laughter, and of course, eating and drinking too much.

In the world I grew up in the outer western suburbs of Sydney, we didn’t have a lot but we still thought we were lucky. After all, all our lives we were told that this was the ‘Lucky Country’ and we appreciated the good fortune that such a credo stood for.

What the term ‘Lucky Country’ meant might have been different for each person, but on the whole we thought nobody starved and there was help available for everyone if they really needed it. And that we had opportunities!

Each of us had an opportunity to make a great life. Naive perhaps, but on the whole Australians were always generous people. It was country I was proud of.

And indeed I was lucky. I got to attend university, the first in my family to have that privilege, during the so-called ‘free university’ period that Whitlam began. I also had a lot of opportunities throughout the years, as did other members of my family, and if we grabbed those opportunities, worked hard, we made something of ourselves.

We could dare to dream of a rewarding and prosperous future. 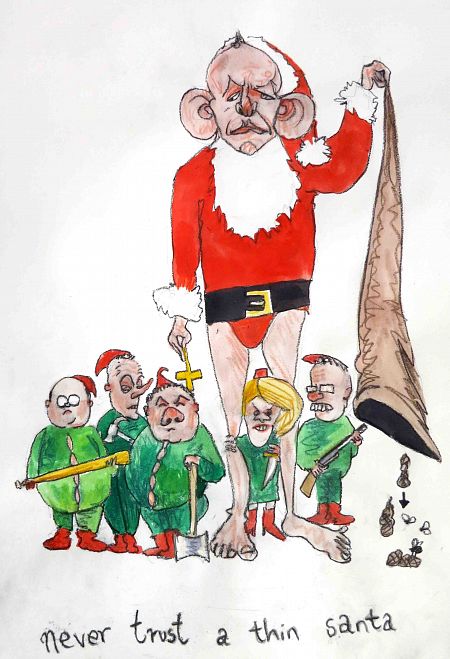 In a way, that is what makes me so sad about the Australia we now live in. No longer can we say we’re the ‘Lucky Country’. In many ways we’ve become a cruel country. A mercenary country. A pessimistic country.

Recent government policy measures don’t draw on that reserve of positive humanity that I grew up feeling. Most are downright mean. From asylum seeker policy to education policy, to employment policy and climate change denial, I see a country veering sharply away from inclusiveness and opportunity, to a place of exclusion and lack of innovative thinking.

Instead of sending a price signal to polluters to stop polluting and halt the quickening march to planetary destruction, this government wants to send price signals to the ill so they won’t seek help. Such a short-sighted, skewed set of priorities simply boggles the mind and certainly doesn’t pass any ‘Christmas Spirit’ test.

I remember some years ago, the then Opposition screeching at the government that they are miserly and should raise the aged pension immediately. Yet the current government is intent on reducing the pension by stealth and eating away at that needed rise. Nope — no Christmas cheer there either.

Perhaps the most saddening result of this government’s policies is the lack of hope in our youth. Youth unemployment is growing exponentially, and yet our government wants to save its dollars by denying any unemployment benefit for the first six months.

I presume this is in the hope that family will pick up the slack, but the hopelessness this existence creates will likely lead to progressively more youth suicide. And at the same time the government is closing down channels for training and education, locking in a generation of under achievers and welfare recipients. 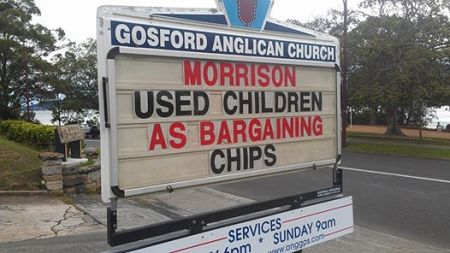 And now, the most recent ‘policy triumph’, the new asylum seeker laws leave me sick to my stomach. Our current government is stacked with religious types, from ‘happy clappers’ to Opus Dei yet NONE show a shred of the humanity their doctrines espouse. The hypocrisy is staggering and I thank the universe I’m an atheist and not subject to the contradictory doctrine of absolution that allows these people in power to set aside their consciences whenever they deem it convenient.

This asylum seekers policy comes at the end of some seven years well-orchestrated use of media (I don’t say manipulation because I believe it has been with most outlets’ acquiescence), designed to stimulate all the worst aspects of human nature. Headlines in the Murdoch press, especially, have played on bigotry, greed, and the downright selfishness of pockets of our community. As well there has been a deliberate censoring of any positive, progressive and innovative information that would help the community to be better informed about issues. Christmas cheer? Bah, humbug!

If I were religious, what would I pray for this Christmas? I’d pray that the community opens its eyes to how we’ve been manipulated. How our apathy has allowed black to become white. I’d pray that we’d understand how destructive this government has been to our way of life. That we’d find a way back to the principles that made us the ‘Lucky Country’ so that maybe I could again be proud to call Australia home.

She won’t be right, mate. No it won’t. Not until we all remember the true ‘spirit of Christmas’. 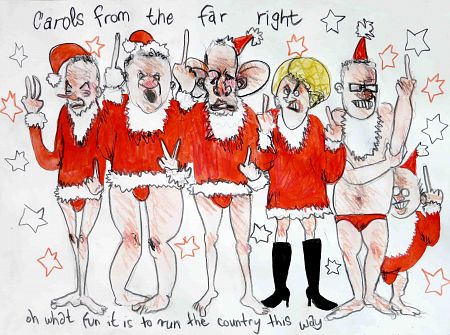 If you get this upset from a gesture of goodwill like #illridewithyou, @GChristensenMP,should we ask people to avoid wishing you Merry Xmas?

#illridewithyou is one of the best Xmas presents I could have asked for. What a beautiful movement!! Well done Sydney!!

So much for Christmas cheer

19 December 2014, 12:00pm Under the Abbott government, Australia is now a cruel, mercenary and pessimistic ...
Join the conversation
comments powered by Disqus
News updates