Senator James Ashby: Why not?

Is Ashbygate assassin James Ashby on the way to become a One Nation senator? Sydney bureau chief Ross Jones sees just four obstacles in his way. 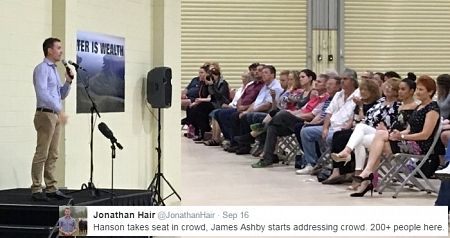 Chew on that for a moment.

When it comes to One Nation, James is the man.

"James Ashby is a man I have the utmost respect and admiration for. Like myself, the establishment has also kicked him about unfairly. Your dedication and hard work beside me added up to the clincher that not only saw me win my seat but also saw the other senators win their seats. With deep appreciation and sincerity, thank you."

There is simply no such thing as an unfair kicking of Ashby, but I don’t remember anyone in the "establishment" putting the boot in. Except maybe the Federal Court.

Sure the political class and the mainstream media sometimes waved a limp foot in his general direction, but no-one actually tried to sink the slipper (sorry) into this wannabe Guy Fawkes.

Pauline is clearly smitten with her clincher.

The man who thinks fairy dust is fair dinkum, the achingly-stupid Malcolm Roberts, also paid tribute to Ashby in his maiden speech:

"I must thank the amazing James Ashby. As with Pauline, they threw everything at you, mate, and you stayed strong, true to our cause and kept your integrity. You are one of the most capable people I have ever met anywhere. Thank you, mate."

Where do you start with this?

Again with the "thrown everything at you" malarkey when in truth the worst Ashby ever copped was free PR on 60 Minutes.

But mate – maaaaate! – you stayed strong, kept your integrity. That would be integrity of the gutter-rat variety.

With friends like these, James is already most of the way up the greasy One Nation pole.

Its not hard to think that, given a couple of years, the next election is in three, James will have slithered his way to the top when the question arises: who will we get to stand for the senate?

The answer, on current trends, will be guess who.

Here is an exchange James had with a lover in August 2011 (from the Ashbygate book):

Lover: don't get brainwashed in your political climb lol

Ashby: No uncertainly won't. I'll be going into politics for the normal blokes and shiela's of Australia :p

There is nothing stopping James running in the next election. His last criminal conviction has expired. He faces no current charges. He has as much right to power and expense accounts as you do.

Just three things could go wrong with James’ grand plan. Well, four, with the last being more a wild card.

Pauline won’t say how much she is paying James, or even confirm he’s on the payroll, so we don’t know what his cashflow looks like. It had better be good though, because there’s about $1 million in legal costs heading straight for him. Negotiations with the Commonwealth, which had reluctantly agreed to meet Slipper’s expenses and therefore wants its money back, are apparently dragging out — but the result is drawing ever closer.

$1 million is a fraction of the total cost of the Ashbygate plot, with Harmer’s racking up a bill of unknown proportions to be paid for by either an unknown benefactor or by the firm itself. James reckoned $3 million, legal gossip goes to $4 million. Enough to hurt.

While that’s Harmer’s problem, James has his own $1 million headache to contend with. Maybe he will do a deal and pay the Commonwealth on the drip. A very cash-flow draining drip.

Fortunately, One Nation has a few bucks to hand and, if James smiles nicely, well, you never know.

Or a hidden Coalition donor paying out a contract. That would do.

James is not yet out of the woods with the AFP.

The AFP spokesperson says investigations into the diary matter are continuing and you have to take their word for it.

It’s a complex investigation and it was only last May the AFP got hold of the real phone records. In my podcast with Dave, I reckoned November would see the outcome, so we shall see.

For James, the consequences could range from gleeful exoneration to career-ending catastrophe.

The AFP might find no evidence of wrongdoing, in which case whoopee, or they might decide to lay charges, in which case, especially if James lucks out in the matter of judge selection, he could face five years. That would put a dampener on things.

But say he gets a one or two year good behavior bond, then he would be eligible to run after that time had expired.

We are talking One Nation here — a soufflé of weirdness and prejudice with highly volatile component parts. Not everyone will take James’ ascension good-naturedly. There are rumblings.

One of its senior advisers recently requested a copy of the Ashbygate book which IA happily despatched. If you can read that book without concluding James is an untrustworthy rat then you are truly stupid.

One Nation is the James and Pauline show with its Dad’s Army of senators waffling around the periphery. None of the senators are make good TV. All can be trusted to go headfirst into the footpath at every interview.

So they are going to need "guidance".

Both Ashby and Hanson have shown themselves to be ruthless when the chips are down, while several One Nation senators are so full of themselves it hurts.

There will be dummy spitting, it all depends how bad.

That James was trusted to publicly announce One Nation had poached and flown into the country a secret Trump financial advisor says much for his current standing in the party.

The secret thing is a very James touch.

Ashby has a serious chance of containing, or even circumventing, the main threats to his political success.

And if the Coalition gets in his way he can blow its reputation apart and destroy it electorally.

The correct question, therefore, is: "Why not?"

'Like a bad case of herpes': James Ashby on the #peterslipper scandal.https://t.co/wtrwZ4fxByhttps://t.co/igxaLQoMaU