Lies and questionable political tactics have made the comparison between Scott Morrison and Donald Trump more valid than ever, writes Paul Begley.

THE MORRISON GOVERNMENT has taken steps in recent days to require Australian voters to produce I.D. in order to vote in federal elections. The Australian Electoral Commission, a body independent of political party influence, routinely audits elections and investigates fraud. It estimated, according to an ABC report, that the rate of multiple voting at the 2019 Election was in the magnitude of 0.03 per cent, with most incidents caused by mental illness rather than deliberate fraud.

The present Prime Minister, Scott Morrison, called his surprise victory in the 2019 Election a “miracle”. That said, his win by one seat was likely assisted by non-celestial misallocation of around $760 million of taxpayer money by way of sports and car park grants to marginal electorates. The winning margin may also have been helped by foreign actors and misleading advertising in the Victorian seat of Chisholm held by MP Gladys Liu, as well as the injection of colossal amounts of Clive Palmer cash that aided the Morrison cause. These possible interventions aside, no one contested the election result on grounds of voter fraud.

So what’s behind the sudden rush to demand voter I.D.? Like a number of other things that have characterised the preoccupations of the Morrison Government over the past two-and-a-half years, the voter fraud issue duplicates activity undertaken by former U.S. President Donald Trump during the years 2016 and 2020. Trump raised voter I.D. and other election practices as potentially fraudulent despite conclusive evidence to the contrary. And despite him actually winning the 2016 Election, he initiated an Integrity Commission in 2018 with a view to invalidating the result that denied him the popular vote by 3 million, but he abandoned the body when it found nothing.

In Australia, we vote on weekends and are compelled by law to have our names marked off the electoral roll on election day. By contrast, Americans try to find time to vote on a working day and around 80 million lawfully declined to vote in the 2020 Presidential Election won by Joe Biden. Although some Australians regard federal elections as a burdensome obligation, relatively few decline to participate in them, yet the Morrison Government appears keen to ape the Trump election integrity ruse.

The outcome is likely to be longer waiting lines at polling places and the disenfranchisement of people whose I.D.s are not up to scratch or who lose patience and just go home, especially if the weather is inclement.

Like Trump, Morrison sees himself as chosen by God to lead the nation. Also like Trump, Morrison has never shown a genuine interest in the public health dimensions of the COVID-19 virus, illustrated from the beginning by his taking no preventative action on the federal responsibility of quarantine.

Makeshift quarantine is fraught with the political dangers inherent in the likelihood of failure and it lumps state premiers with the unpalatable role of playing gaol warden and spoilsport. By way of contrast, Morrison has by now happily confused voters on who owns quarantine and associates himself instead as the agent of freedom.

Victorian Premier Daniel Andrews officially ended the Victorian lockdown recently, but the Prime Minister took much of the credit for bestowing the consequential freedom and fun that went with it. Trump behaved in a similar fashion, inciting mobs to rise up against governors such as Gretchen Whitmer’s lockdown of Michigan by tweeting populist calls to ‘liberate’ and prompting those who do to be mindful of the second amendment, code in the U.S. for “bring your guns”.

Morrison’s only real health-related intervention was to undermine the AstraZeneca vaccine after he discovered he hadn’t ordered adequate supplies of Pfizer in 2020. That failure exposed Australians to months of preventable lockdowns until the population could catch up on vaccination rates. Instead of apologising for his supply failure, he initially went with the “it’s not a race” line in March and April until he saw it didn’t go down well. 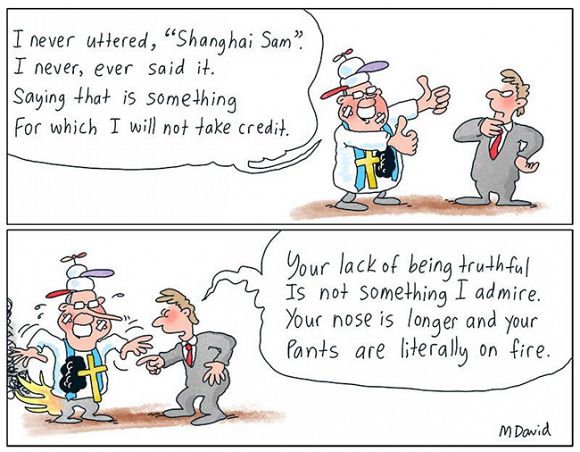 Flashback 2019: 10 reasons why Scott Morrison is actually a hypocrite

Prime Minister Scott Morrison has built a reputation for being a liar and a hypocrite, with his lies now causing tensions between foreign partners.

By August, he had deftly moved to the view in a major speech that Australians must “not fear the virus” as cave-dwelling state premiers would have them do. Instead, they must look to the Morrison dawn rather than the dark hour that precedes it. With cases, hospitalisations and deaths rising daily in Victoria and NSW, his call was the next best thing to Trump’s line in October 2020 that the virus had “turned the corner”, as U.S. deaths hit 400,000 and kept rising.

Another striking similarity between what Trump did and what Morrison does is their predisposition for making hollow announcements. Over four years as President, Trump constantly announced that he had plans for healthcare to replace Obamacare and that he had an infrastructure plan. When he left office, he had made no effective progress on either.

Trump elevated announcements above most other Government activities. When he raised the matter of Hunter Biden with Ukrainian President Volodymyr Zelensky, the subject of his first impeachment, Trump did not ask that Hunter be investigated, he simply asked that Zelensky announce that Hunter was being investigated. The thinking is that an announcement from an authority impresses on the audience the vague idea that someone needs to be investigated, suggesting the likelihood of guilt. An actual investigation is not so useful, especially if it ends up finding that the party being investigated has no case to answer.

Morrison uses formal announcements constantly to establish the idea that he has matters under control. Under the pump in early 2020, he announced a promise of big bushfire relief funds that many months later had not materialised. In October 2020, he announced that vaccines had been secured that put Australia “first in line” for a vaccine rollout, whereas the truth was that an inadequate order of Pfizer vaccines was ordered in November 2020 that resulted in vaccination delays and lockdowns.

This week at the Glasgow Climate Conference, he announced $500 million extra aid to a total of $2 billion to assist Pacific and south-east Asian nations to deal with climate change. Fiji’s Prime Minister Frank Bainimarama tweeted that he wanted to see Morrison ‘show us a concrete plan to halve emissions by 2030’. Fiji has been bitten before by Morrison announcements. Some Twitter users wondered whether the money not spent on bushfire relief would find a use and others just suggested the Islanders would never see a cent.

Australia's pledge is a start. I've now urged @ScottMorrisonMP to show us a concrete plan to halve emissions by 2030.

I've given him a copy of Fiji's Climate Change Act as a guide –– it is our uniquely Fijian way of following the science to keep faith with future generations. pic.twitter.com/8c3UZIfFNg

A curiosity of both Trump and Morrison is their apparent faith in the efficacy of photographs. Trump famously walked to St John's Church on the other side of Lafayette Square to stage an awkward photoshoot with him holding a Bible. Another was taken when he was in hospital recovering from COVID-19. The photographer shot him at a table with pen and paper to demonstrate that he was healthy and industrious, both untrue.

Morrison’s personal photographer regularly choreographs him staging BBQ meals, making a cubby house, writing a sombre condolence card to the Queen, doing important paperwork at a table on his jet and touching people like UK Prime Minister Boris Johnson and French President Emmanuel Macron on the shoulder after interrupting their conversations at the Glasgow Conference, suggesting a familiarity that was not shared.

By contrast, the press photos tend to show Morrison by himself looking a little lost and having no one to talk to. Before the 2019 Election, his photographer took pictures of him at Church and at Sharks football games drinking beer, just like an ordinary bloke. In fact, he was raised in the uppity inner suburb of Bronte, went to a select-entry school, did an honours degree at UNSW and looked down his nose at rugby league. He was a rugby union player. Now, he is pictured by his photographer as the statesman working hard and mingling with important world leaders.

According to the Washington Post’s fact-checker, Trump accumulated 30,573 false utterances over the four years of his administration. Morrison’s mistruths don’t get global coverage as Trump’s did but he copies his U.S. mentor in regularly asserting things that are simply untrue but are easily refutable. His barefaced denials of ever having used the phrase “Shanghai Sam” or saying that electric cars will never be able to tow tradies’ boats or pull their trailers but will destroy their weekends are of the same order as Trump’s assertions about it not raining during his inauguration (it did rain) or that the Boy Scout leaders called him after a bizarre jamboree address to tell him it was the greatest speech they had ever heard (no Scout leader called him).

These are the sort of departures from fact that serial liars tell as a default impulse. Morrison was caught in a similar fabrication in January 2020 after saying that a bushfire victim in Cobargo, Zoey Salucci-McDermott, talked with him about the need for greater support for the bushfire effort in NSW. “We talked about that,” he said. Cameras present on the occasion showed him meeting her for a few seconds. She said nothing to him and he said, “I understand. I understand”.

As a Crikey dossier reveals, Morrison is a repeat offender who was caught out last week at the G20 with Emmanuel Macron pulling no punches when asked whether he thought Morrison had lied to him over the submarine contract.

Morrison’s pre-election desperation to run with the Trump playbook is becoming increasingly apparent, but is also increasingly curious. Someone needs to give him the benefit of some relevant information: Trump lost.

Scott Morrison has outstayed his welcome

Morrison's devotion to Trump may be his undoing

16 August 2022, 5:00pm Revelations of Scott Morrison's secret power grab have left us baffled as to how ...
Join the conversation
comments powered by Disqus
News updates