Scott Morrison: A lonely man with an empty plan

After looking lost amongst global peers at the G7 earlier this year, the Prime Minister took his “plan” to Glasgow via Rome to have another go at grand diplomacy, writes Joel Jenkins.

ELVIS COSTELLO released ‘Shipbuilding’, one of his most politically controversial songs, in protest of the Falklands War and it remains a poignant example of a moment in time. In 1982, UK Prime Minister Margaret Thatcher had sent the boats to war while closing the shipyards that built them back home. In 2021, Prime Minister Scott Morrison closed the shipyards, upset the French, condemned the Collins to a late retirement, made no changes to climate policy and floated off to Glasgow via Rome in “Shark One”.

Laura Tingle wrote solemnly about the lost art of governance in her Quarterly Essay titled ‘Political Amnesia’, demonstrating the shifting changes and the lost memory of the political land journalistic class, like lost symphonies, never to be played authentically again. In the same world, after Francis Fukuyama’s ‘The End of History’ and the post-9/11-GFC global order, the same amnesia seems to be affecting the ancient practice of multilateralism and Australia’s integral role in it.

The dying art of grand diplomacy, with all its intricacies, is lost on a Prime Minister who can only speak the domestic language of small ideas — a “larrikin” from the Shire who doesn’t even like the Sharks. Morrison’s paltry considerations, half measures and mistruths bare his glossy disingenuousness to all, uncomfortable and jarring in the esteemed setting and international coverage of the G20 — real-time contradictions all caught on tape, the tail-end, laughing stock on the stage of the last vestiges of international cohesion.

OK Morrisons speech at Cop26 explained A. he wasn't yelling he was echoing B. he was echoing because the room was large and largely empty ... thanks to SBS for the shots. pic.twitter.com/QWYegKRDLy

International gigs like the G20 and COP26 are especially important in this era where rapid global shifts are compounded by the breakdown of international consensus, exacerbated by climate change, plagued by pandemic and compounded by the changing international order and the rise of great power competition between China and the United States. Many of those present at the G20 and Glasgow claim to be democracies. Some actually are, most are in varying stages of peril and some are Saudi Arabia. Wherever they are on the freedom index, they all face crucial challenges from the effects of climate change and most are demanding action.

From the moment Morrison landed in Rome for the G20, the footage could not be so kind. No matter how many angles the PM’s photographer took, no matter where the Prime Minister meekly positioned himself in the bullpen of the world’s most wealthy nations, he demonstrated a genuine discomfort with his widely criticised “plan”. His lingua franca was so weak and mumbled, even Mathias Cormann gave him doughnuts. Scott Morrison stood awkwardly in the crowds of multilingual and collegial, among the premium world leaders, oozing in their sophistication, revealing the Australian pariah that was only interested in hiding from a certain Frenchman.

President Emmanuel Macron, a highly-practised and powerful European politician from a country that has more television philosophers than we have former footy player betting app shills, says “I have a lot of respect for your country” and “your people” before he answers “I don’t think, I know” to a question about the Prime Minister lying to him. The fact that the leader of a key sovereign nation-state and international power calls our leader a liar at an international forum demonstrates the seriousness of the delicate situation and its bearing on our international standing.

The Prime Minister of Australia, sensing less proximity to the “Gallic scorn” in Rome, then went down to the docks in Glasgow and shirt-fronted Macron’s words off the pier, saying:

He hid behind the Australian people, but Macron’s dart had already landed, this was an international scandal. Just in time for Glasgow.

It is a character like this, someone with such unknown motivations, that can see value in behaving like this in the crystal gaze of the world stage, minutes after events that precede sentences that contradict everything. Not many others would dream of behaving like this. After wisping around Rome like the ghost of Messalina, he bends the logarithmic bar in Glasgow, jerks his collar in the headlights and coughs out 35 per cent reductions by 2030.

The Morrison Government, after forming under the pitchforks and firelight of anti-National Energy Guarantee appreciation societies, has not made one single change to 26-28 per cent short term emissions cuts baked into the Abbot-era benchmark. In fact, to add, his gloss riddled “plan” now has a couple of incomprehensible demands from the Nationals scribbled into the back pages. The world looks to solve an existential crisis on the old Roman cobbles, while Deputy PM Barnaby Joyce makes ultimatums and gets $150 million for dirt roads back home, in a galaxy far, far away.

If Scott wasn’t sitting on a big chunk of Terra Nullius and was somewhere a bit more existential and sea-levelly, like Bangladesh, then perhaps he wouldn’t have hurriedly highlighted a few lines of a bestseller on the way to Rome written by a guy who is choppering in billionaire guests to his 1-million-Euro-per-week yacht in the Aegean. He sits on a plane, plan by his side, within deliberate eyeshot of a hand-picked lifestyle journalist.

The fact that all these world leaders are copping out and bullshitting in unison makes it even worse that our guy is the pariah of this mob. Morrison’s cadence has been to take his Dunning Kruger on to the big leagues, hiding behind the honour he has tarnished. He never wanted to go to Glasgow and it showed. 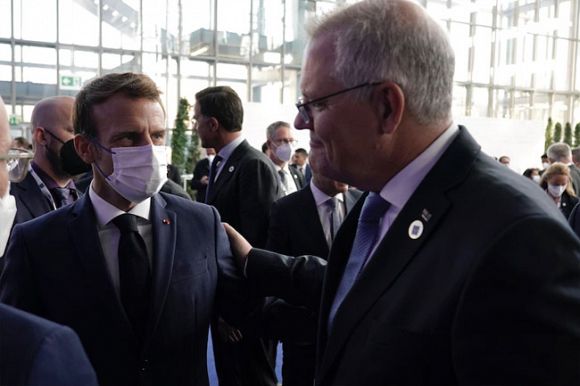 By the looks of it, Glasgow is going to make Madrid look like the Congress of Vienna. World leaders have consistently failed to ‘act sufficiently quickly to prevent the destruction of nature and runaway global heating’ and they are running out of time. The limits of human reason, at the precipice of existential condemnation, are witnessed by the lack of contributions from China and the absence of Brazil – with whom much of the world's life-saving forests are located – and the presence of Saudi Arabia, our head-to-head emissions competitor, who has at least revealed its insanely contradictory modelling in some kind of comprehensible package.

The fact that our presence and our “plan” is so much more ridiculous, that we are competing for the dregs of reputation with a petro-monarchical-theocracy, speaks to the decade long and willful degradation of climate policy and action, from “axe the tax” to “don’t be afraid” to this sub-mediocre “plan”.

Ten years ago, Australia had the Clean Energy Act, a world-leading attempt to combat this existential crisis. We could have been attending places like Madrid and Glasgow, driving the discussion and inspiring the response, innovating and endeavouring to change the mindset of the world through powerful action. The leaders of this country – and the world – have not only forgotten to govern, but they have also forgotten to inspire, failing the human race on the edge of the Anthropocene.

Instead of a leader, we have a self-imploding survivalist poised to leave a stain on the history books, setting Australians on the back foot of a long, arduous and scary chapter of the human experience on this planet. To be received with such critical reception, to have unprecedented things said to him by the leader of a country that has practised grand diplomacy for over a thousand years and for him to deny it in all the flux and proximity and attention of the anxious world, is a grave error that will have profound impacts on our future. After hearing the weight of these actions articulated at the National Press Club by the French Ambassador to Australia, maybe it is worth copping a sledge.

The carry-over ordinariness continues in front of empty rooms at Glasgow, the emptiness of his pamphlet spoken to no one. After the slides are over, it is no surprise that “the plan”, the man, the guy who is asked to leave a guy’s lawn, would be hopping back into the flying shark, hanging to return to the warmth of the press and political classes, the photographers and Barnaby. Back to us and all of our sleepiness, tucked away in the global south, in this burning desert continent.

16 January 2022, 8:00am The Morrison Government appointment of a long-time friend to Rupert Murdoch as ...

The year of the RAT: Morrison's failures clear for all to see

13 January 2022, 3:00pm Scott Morrison and his Government have continually failed to show leadership ...

10 December 2021, 3:00pm It seems the Prime Minister is blaming the choice of tyres while ignoring Team ...
Join the conversation
comments powered by Disqus
News updates