Rudd should fade into obscurity

Historian and ALP member Wil Wallace says the honourable thing for Kevin Rudd to do following his resignation is to fade into obscurity. 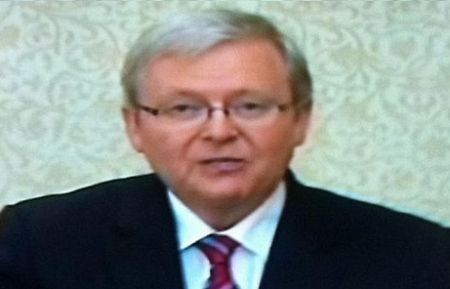 Last night, similar to 2010, when it was announced that Julia Gillard had held meetings with Kevin Rudd over the leadership of the ALP, the air has been electric with anticipation about the future of our Governmental leadership.

The excitement was caused by the shock resignation of Kevin Rudd, who called a press conference at 1am yesterday in Washington, where he was engaged on Ministerial duties, so as to ensure that the announcement would reach Australia in time for the early evening and primetime news bulletins. Though there has been a lot of talking from various members of the ALP and its supporting cast, all we know for sure is that Julia Gillard will be hosting a press conference this morning and that Mr Rudd has pledged to stay on as MP for the seat of Griffith until, at least, the next election.

Some have suggested that Mr Rudd’s resignation speech showed him as a victim of the “faceless men” running the Labor Party, or that it was an adequate response to his bullying by others in the Party; I reject this completely. As Simon Crean said earlier in the week, Mr Rudd has never been a team player and he has been prepared to harass and bully staff and colleagues into acceding to his demands. In the early period following the installation of Ms Gillard as Prime Minister, Mr Rudd was often accused of being a “Prime Minister in Waiting” and acting as the Prime Minister when discharging his duties as Foreign Minister.

The reasoning that he should resign because he did not have the confidence of the Prime Minister shows Mr Rudd is still operating in a prime ministerial mind frame — surely the onus is on Ministers to remain loyal to their leaders (and parties and, I suppose, their constituents) rather than the other way around?

One should also point out that Mr Rudd is, at the very least, disingenuous when criticising the actions of “faceless men” and factions; there is no way that Mr Rudd could have risen to Leader of the Opposition after only nine years in politics without the assistance of the factions and factional power-brokers. Indeed, Mr Rudd has himself has acted as a powerbroker for Queensland Labor aspirants since becoming elected.

The aftermath of Mr Rudd’s resignation has produced some interesting results: Ms Gillard calling a press conference for tomorrow morning and Wayne Swan releasing a blistering (but, in my opinion, accurate) response to Mr Rudd’s resignation. Most concerning, however, is talk from the Labor party about finding the best way forward to success at the next election.

While the prospect of an Abbott government is truly terrifying to me, the ALP needs to remember that party politics isn’t about winning elections: it is about combining to create policies that will benefit the population. Mr Rudd was heavily criticised during the 2007 election campaign for being too similar to John Howard and is personally responsible for aiding and furthering the disenfranchisement of Labor party members and the Australian public.

Despite what has been published in the mainstream media for some months, Mr Rudd was desperately unpopular with the Australian public when he was replaced — his electoral liability was, after all, a major consideration in replacing him. Unless Mr Rudd learns to be a team player and works with his colleagues, his continuing presence in the chamber will only be damaging for the ALP, the Gillard Government and the Australian public.

One can only hope that he does the really honourable thing by resigning and fading into obscurity.