Raising the GST will hurt workers and the poor: There are other, fairer options

If everything is on the table, rather than raising the GST to 15% and further increasing inequality, Malcolm Turnbull has a range of other options to help resolve Australia's current fiscal imbalance, writes John Passant. 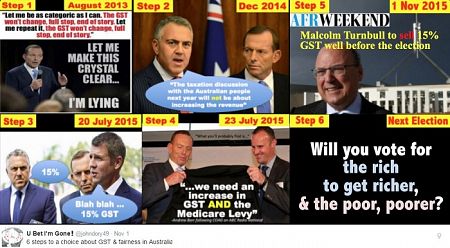 When it comes to tax, nothing is off the table, according to the new prime minister and the gabble of turkey gobblers masquerading as economic ministers in his Government.

"Nothing is off the table" is code for looking at taxes that increase the revenue burden on workers and the poor.

So it is we have a humble backbencher, Nationals MP David Gillespie, floating the benefits of making the GST like the NZ equivalent. (Getting a backbencher to do you dirty GST work is the tax version of a Dorothy Dixer).

A move to the NZ model would involve increasing the rate from its current 10% to 15% and broadening the base to include currently untaxed spending on fresh food, health and education.

Australia’s GST exemptions at the moment mean that only about 47% of consumption is taxed. The comparable NZ figure is 97% caught.

If the Turnbull government were to proceed with such a proposal, win the next election (highly likely given Labor’s metooism on most matters and lack of real oppositional leadership) and then implement it, in 2016-17 it would raise, according to the Parliamentary Budget Office, an extra $65 billion a year on top of the $65 billion or so from the GST that is currently collected.

You can do a lot with an extra $65 billion a year. First, as a neoliberal government, you’d have to give back a little of the extra tax to workers and the poor through income tax cuts and increased social security payments. However, bracket creep over a few years would negate those tax cuts. Social welfare payments and pensions are already poverty traps, and no amount of fiddling at the edges is going to change that.

The GST is a regressive tax. This just means that poor and low paid people pay a larger percentage of their income on the tax than do rich people. Increasing the rate and broadening the base will only make that worse. 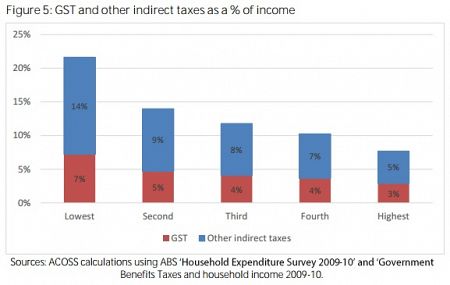 Australian Unions argue, based on NATSEM analysis, that these GST changes would cost an average household almost $3,000 a year.

Indeed, this GST "reform" talk is part of a wider pattern the OECD identified recently among its members, including Australia. Income inequality is increasing and, at the same time, neoliberal tax "reform" is rendering tax systems less and less able to address that growing inequality. Like incomes, tax systems have become more inequitable.

A government with guts could reverse that. It could champion taxing the rich till their pips squeak. If nothing is truly off the table, then a net wealth tax of 2% on the top ten per cent of wealth holders in Australia could raise up to if not more than $30 billion a year.  Is a net wealth tax on the table Mr Turnbull?

What about estate and death duties, Mr Turnbull? Are they on the table? Gina Rinehart, James Packer and even Rupert Murdoch didn’t get rich through hard work. They inherited their initial wealth.

The current superannuation tax concessions forgo almost $40 billion a year, and 57% of that revenue forgone goes to the top 20% of income earners. Scraping the concessions for them has the potential to raise about $20 billion alone.

Of course, these rich tax leaners would look for other lurks to reduce their tax. Investing in negatively geared properties, shares and so on would be one option. So, a government with guts would get rid of that too. This has the potential to raise around $5 billion a year.

Another option for the tax leaners if these avenues were closed off would be to invest even more in the family home. A government with guts would include family homes sold for more than, say, $2.5 million in the capital gains tax.

If a person holds an asset for more than 12 months and then sells it, only half the net gain is taxed under our capital gains tax. The top 20% of income earners make 80% of capital gains, so abolishing that concession would be both just and equitable and raise billions.

It isn’t rocket science. Whichever tax lurk the tax leaners rush to put their money in, close it down.

Then, of course, there is tax avoidance by big business. Labor announced some fairly modest proposals that, if adopted, would raise about an extra $1.4 billion a year. This gives the impression of doing something without really doing much at all and least of all alienating big business.  It is chicken feed really when so much more can be done.

As the ATO recently revealed, one in five private companies with a turnover of more than $100 million pay no income tax. Deputy Commissioner of Taxation Jim Killaly back in 2010 told a conference that 40% of big business paid no income tax.

Even those companies that do pay tax often – as result of profit shifting, other avoidance or undeserved deductions they can avail themselves of in the income tax system – have effective tax rates (the tax they pay as a percentage of their accounting income) well below the statutory rate of 30% of taxable income. A minimum company tax ensuring that companies pay the same effective tax rate as a worker on the average wage – about 22% – instead of the miserly five or ten per cent effective tax rate many do pay, would be a good start.

Finally, Mr Turnbull, instead of cutting taxes on the rich, it is time to consider making our tax system for the top ten per cent of income earners more equitable by taxing them more. Indeed, how about a 100% tax rate on the 1% whose income is greater than $250,000 and working backwards from there.

These measures would mean not only that you would not need to hit the poor and workers with GST changes, but that you could abolish this regressive tax.

So, Mr Turnbull, if everything is really on the table when it comes to tax, I look forward to a discussion about these suggestions for taxing the rich. I am happy to debate you anywhere, anytime about tax, equity and justice.

John Passant is a former Assistant Commissioner of Taxation in the Australian Tax Office. He was in charge of international tax reform in the ATO. You can follow John on Twitter @JohnPassant.

Mr 15% out to make us pay more and let the big end of town off the hook. GST = Gotta Stop Turnbull! #auspol #CFMEU pic.twitter.com/uu58ckdPQ8