Queensland and the weird alternate reality of climate change denialists

How the Queensland LNP “disproved” climate change science using just a couple of Eskies, a roll of Glad Wrap and an astonishing amount of hubris. Graham Readfearn reports. 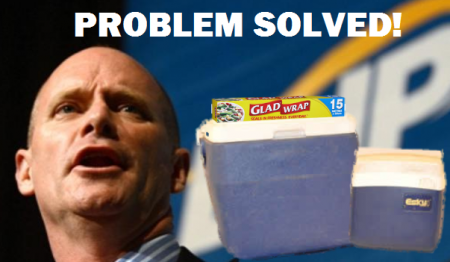 SOMETIMES in the world of climate science “scepticism”, things can become a little surreal. A bit odd, if you will, to the point where you need to inflict a sharp pain upon your person to confirm you’ve not drifted off into an alternate reality.

Like the time when TV station Channel Seven, for example, chose a “climate expert” who, as it later turned out, had once written a book called “Pawmistry”  — which described how reading your cat’s paws could reveal their unique character.


‘…incendiary abortion laws which decimate life in the womb.’


‘…the people who still believe in man-made global warming are mostly on the radical fringe of society. This is why the most prominent advocates of global warming aren’t scientists. They are murderers, tyrants, and madmen.’

To me, the odd thing about these instances is not that they actually happened or that there are people with enough arrogance and ideology to believe their own fantasies. What’s odd is that people in positions of influence still associate themselves with them.

Ken Ring, the “pawmistry” guy, still gets slots on Channel Seven. Indeed, he was on again just a couple of months ago.

The Heartland Institute may have paid the price for its billboard campaign comparing acceptance of climate science to the Unabomber, but it didn’t stop Institute of Public Affairs science fellow Professor Bob Carter concluding the campaign was a good idea.

And so, with all this in mind, we come to the latest episode, where Queensland’s currently in-power Liberal-National Party has accepted a motion that climate science shouldn’t be taught in schools. The proposer of the motion, which was accepted unanimously (but may not be taken up by the parliamentary wing of the party), is a Dr Richard Pearson, from Noosa.

It now appears that Dr Pearson has been conducting his own climate science experiments — at home, in his kitchen, armed only with thermometers, two fish cooler boxes and a roll of cling film. Some may find the results remarkable; you see, Dr Pearson believes he may have disproved the greenhouse effect (you may now pinch yourself).

We know this because he wrote about his experiment on the website of the climate sceptic group the Galileo Movement — whose patron is the noted climate expert (and radio presenter) Alan Jones. Dr Pearson’s conclusion?


‘That the Greenhouse Effect theory is not confirmed by this experiment and may be disproved by it.’

Now, even though the notion that a guy in his kitchen in Noosa armed with two eskies and a roll of cling film could single-handedly disprove the greenhouse theory may seem just a tad fanciful – because I acknowledge that to some it may – I thought I’d waste the time of an actual atmospheric scientist.

Because after all, I don’t presume to be a scientist even though I did once make one of those volcanoes from bicarb of soda, vinegar and food colouring. My experiment was a success and also falsified the outrageous claim that my mum’s tablecloth was “stainless”.

I guess, though, that there’s an extraordinarily slim chance that a Nobel prize could be winging its way to Dr Pearson’s residence (he could put it in his fish cooler box for safe keeping). So I asked Professor Steven Sherwood at the University of New South Wales Climate Change Research Centre to review Dr Pearson’s experiment. This is his response. Settle in.


‘This request falls at an interesting time, as I just finished lecturing about the greenhouse effect to students who have no background in science  - they’re mostly arts majors.  At this point I would expect – or hope – these students have sufficient understanding to see why this “experiment” by Dr. Pearson did not work.  In fact I may use this as a test question or follow-up question to see if they understood the lecture.  Also, if Dr. Pearson would spend even one hour studying the greenhouse effect he would learn why this test does not work.

‘In his film-covered boxes, the temperature is essentially uniform.  Thus there is no greenhouse effect, no matter what substance he puts into the box.  Incidentally for a number of years I had students build such boxes(not filled with CO2) and they can be a good way to learn about radiation — for example, if he places this (air-filled) box outside at night he will see that the temperature falls below the surface temperature.  This is because of emission of infrared radiation which is not balanced by sunlight.

‘In fact, Dr. Pearson could mimic the true greenhouse effect if he could build a several-layer system and put CO2 in the top layer, but thermally insulate it from the lower layer.  This would be quite a bit more difficult to build, and the performance could be severely compromised by diffusion of heat within the apparatus and to the outside, but in principle could begin to reveal the greenhouse effect.

‘By the way, the greenhouse trapping of CO2 and other greenhouse gases is not a theory as Pearson falsely claims but is directly observed by satellites.  It is an observed fact, and the warming follows from the principle of conservation of energy, which is as close to observed fact as one gets with theories in physics.’

So there you go. If only Dr Pearson had checked with an actual expert in atmospheric physics, then he could have saved himself some time — oh, and Glad Wrap.

If you bother to read Dr Pearson’s “experiment” then it could sound vaguely plausible to non-experts, such as the vast majority of the general public. At the end of his experiment, Dr Pearson recounts how his daughter had questioned how a man with cling film could “disprove a theory that hundreds of climate scientists around the world say is true”. “That my darling is science”, was Dr Pearson’s response. Is it really?

‘When Dr. Pearson says, “that’s science,” he is I am afraid kidding himself,’ adds Professor Sherwood.


‘The way a real scientist interprets an observation is to write down the equations governing the system.  This is what my students have done.  They are not hard, and for the type of system Dr Pearson is putting together do not involve, for example, calculus – only the ability to solve a coupled system of linear equations.  Only then do you know whether you are interpreting it correctly.’

Professor Matthew England, of the University of New South Wales Climate Change Research Centre and also chairman of the Australian Climate Commission’s science advisory panel, says the motion which Dr Pearson managed to get passed at the LNP’s state conference could have broad ramifications, if only for the state’s reputation.

If the proposal to remove greenhouse science from the school curriculum is enacted, Queensland’s education system will become an international joke overnight. Basic greenhouse gas physics has been established with around 200 years of scientific progress — any move to muzzle climate science facts from being taught at schools will be condemned as world’s worst practice in scientific education.

So if the Queensland Education Minister John Paul Langbroek does act on the motion from his party, then Prof England says the State will be a laughing stock.

Until then, we’ll just have to settle for the majority of the members of the LNP.