Rabbi Jonathan Keren-Black shares his recent experiences at peaceful demonstrations for action on climate change outside the offices of Bill Shorten and Josh Frydenberg.

I AM, if not preoccupied, at least seriously engaged with the question from the future:

"What were you doing to try to stop the world from spiralling into ever increasing temperatures and violent weather patterns?"

My faith impels me to to put prayer into practice, to repair the world, not destroy it. In fact it views humans as its caretakers, looking after God’s creation and passing it on in good condition to those who come after us — that is, ‘sustainability’, millennia before the term was coined.

So on Wednesday, 18 May, I participated in a peaceful demonstration in Moonee Ponds, at (Leader of the Opposition) Bill Shorten’s constituency office — a part of the 350.org campaign to show worldwide concern for the need for dramatic and immediate action.

I don’t want to undermine it in any way by saying it was small but rather to give an idea of the threat, or lack of threat, that it posed. There were about 20 of us there, with placards. Bear in mind that similar gatherings were happening in constituencies across the country and indeed the world, making it a very large demonstration indeed! We went quietly up to the waiting area of the office and stood absolutely silently while the spokesperson explained to the office manager what our concerns were and asked that they, along with a petition, be handed to Mr Shorten.

When we filed out, saying not a word, I actually asked if I’d missed the instruction to have a silent demonstration! I even suggested perhaps we should have used tape to gag our mouths, representing the earth, unable to speak out about what is being done to it. As I was saying this, a guy dressed in a dark jumper beckoned to the organiser: "No worries mate, I just wanted to have a word", he said, taking him aside where a woman was also waiting and the group dispersed. 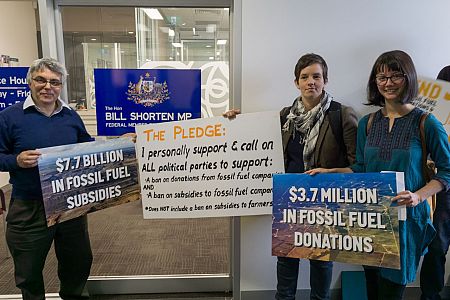 Walking back to my car, I wondered what the sign was on the windscreen. Drawing closer, I realised it said ‘Police’ — then I realised it was not my car but a similar one parked in front of mine. As I settled into my own (plug-in hybrid) car, I noticed the white strobe lights on either side of the number plate of the car in front and realised that the unmarked police car belonged to the plain-clothes police who must have been keeping an eye on our demonstration and talking to the organiser afterwards.

Assuming they caused him no grief, I couldn’t really complain that a couple of police were keeping a low profile eye on the office of the Leader of the Opposition when a demonstration was taking place.

However, two days later, I had agreed to participate in another of the demonstrations — this time outside my local MP Josh Frydenberg’s office. I have already conveyed my concerns to Josh on several occasions but since he is Minister for Resources, Energy and Northern Australia and a rising star in the Liberal Party, I thought I should add my voice to the demonstration. In fact, I even wrote new lyrics to ‘We Shall Overcome’ to take along and we sung them later, on the pavement:

Leave them deep in the earth, for we can be sure,

That this will save the earth some day.

(then repeat with using, selling and shipping).

As we prepared to go in to the office, I saw a uniformed policeman watching from the other side of the road. On this side, were two more police to the right and, I think, three more to the left. I didn’t notice the plain-clothes officers (if any).

When we went up to the MPs office this time, it was a different story. Someone tried and rattled the door a few times. Nothing happened. The office was locked and the lights were off, despite the fact that it was 10am on Friday morning and the sign on the door clearly said ‘Open Monday-Friday, 9-5’. Also on the door was a phone number. So I phoned it. I said,

"Good morning, I’d like to come in and talk to the Minister.’

"I’m afraid the Minister isn’t here – anyway, it isn’t a good time, we have a demonstration outside at present."

"I know, I’m part of the demonstration. We’d like to tell you of our concerns about environmental policies."

"Well, we’ve heard you. Are you a constituent?"

"No, we’ve been advised to keep the door locked."

So much for the democratic process! This small, well behaved demonstration – again only 20-25 strong – had engaged at least six police, presumably for over an hour. Makes me wonder if the Minister was, in fact, inside all along!

What we can conclude is that demonstrations like these are getting noticed. And they should be. The salient facts are years beyond dispute. The changes are happening alarmingly fast.

Who will speak for the earth and for the future if not us — you and me?

Jonathan Keren-Black is a Melbourne Rabbi and an active member of ecological groups JECO, GreenFaith Australia and ARRCC.

The world spends $5.3 trillion p.a. on #fossilfuels. More than health. RT if you think this is sick http://t.co/PpqN9cNF40