Polling lower than an underdog’s belly

Meet Darrell S. Morrison — the Independent candidate for the Australian Senate who has drawn 97th and last place on Victoria's record-breaking ballot paper.

IF JOHN BATMAN was a better bounty hunter, you would not be reading this.

I live in Portland, south west Victoria, which was settled on 19 November 1834, as the first European settlement, only seven months before Batman (sans Robin), alighted on the shore of what is now Port Phillip Bay.

As the history books tussle between Batman and Fawkner as founding fathers of the bursting metropolis that is Melbourne, I can now only wonder what guerrilla tactics were employed by my illustrious ancestor Mannalargenna, chief of the Ben Lomond tribe (or Plangermaireener) ‒ located somewhat ironically at Cape Portland in Tasmania ‒ to avoid the sinewed clutches of Batman. Mannalargenna acted as an emissary for Robinson who was conducting a census — more like a roundup of Indigenous Van Diemen’s Land people; a process of assimilation and, at other times, annihilation. Batman was a bounty hunter, then becoming explorer and expedition leader. Mannalargenna had essentially led the ambitious captors on a merry dance, an indigenous resistance. Escaping early death, but then dying on Flinders Island, as many did; languishing through sickness and improper living conditions.

Melbourne surged ahead of Portland in development and, indeed, the whole island of Tasmania, for population, and became an economic powerhouse and the capital of a new Colony. Indeed, it became the seat of the Federal Government at Federation, before the ensuing birth of the ACT as Canberra took over as the nation’s capital.

It was a family secret of sorts, only becoming quite clear to me after my mother had died in 1989, and I was able to continue with genealogy and earlier work by an uncle revealed academic papers, which told the entire exciting history. I had gone looking for convicts to shake out of the family tree, only to find Indigenous royalty.

This awakening answered a lot of whispered questions and fostered a calming sense of identity and self-satisfaction. I stared in awe at the caveman like study from early drawings, literally silenced and gobsmacked. That, combined with Scottish and English blood-lines and a dash of Irish cream, and I feel part of many cultures. It is both grounding and attractive at the same time.

Coming out as a pale Caucasian with a well-documented Indigenous ancestor sometimes makes my listener’s skin crawl. Australians are uneasy when it comes to such talk — even now. It is getting better, but it all sounds too implausible. A convict in the closet would have been an easier sell.

In 2008, I wrote to the occasional Prime Minister, beseeching him to think ahead, and to make the apology he was planning all encompassing, healing and moving. It fell on deaf ears and, while appreciated, the decision for the speech was rushed when it could have been an epic tale seared into the hearts and minds of Australians. It could have been up there with Dr King’s ‘I have a dream’, or the Lincoln’s Gettysburg address but, alas, no

In my view, it was an opportunity for hastened reconciliation lost. My draft has been published and it brought some to tears. No-one has a monopoly on wisdom and I am no candidate to the mantle either.

I did a stint in local government in the early 1990s with the City of Portland — before it was swallowed up by the Glenelg Shire in the Kennett Government’s truncating of municipalities from over 200 to around 88. Amalgamation — the Holy Grail designed to lessen ratepayers the expense. Except for one famous rate reduction presided over by Mayor Mike Noske, it has been creeping up ever since. When I ran for council, I had snagged the last of the eight places on the ballot; a stroke of luck — I had cornered the donkey vote. To make the exercise even more challenging, none of the promised preferences were forthcoming. Damn liars. I was 29, what did I know about horse-trading!

I topped the poll, after standing all day in the rain at the north Portland Scout Hall with a green garbage bag for a poncho, handed to me by Mrs Harvey, one of my former primary school teachers. Why was I not at the Civic Hall with all the other aspirants, the Returning Officer exclaimed. It was the tradition. Humph, I was in my old neighbourhood, among friends. How did I thwart the pitiful preferences and last marble? I targeted my opponents’ constituents, not the ones they thought I would chase. I also targeted and challenged the preferences openly and surprisingly, people understood and they listened.

Roll forward to 2013, I have snagged the last position out of a record 97 contestants for the Victorian allocation of six seats in the half-senate election. There is no-one lower. I am the under-dog’s underdog — his scrotum hairs. I am glad now I did not travel four hours to Melbourne for that humiliation.

With allegations of Murdoch et al being the puppet-master media moguls, it’s hard for anyone outside the old parties to access any air-time — the oxygen thieves are hard at work filling the pages and airwaves with the KRUDD and RABBOTT presidential race. I’ll need to summon my wily inner Mannalargenna and possibly adopt more of my Scottish mongrel. A bit hard when your key policy is “Respect for All™”; I cannot be my own attack dog. Interestingly, that was an Abbott role in the Howard years.

Do I dress like chicken as Nick Xenophon was wont to do in Adelaide’s Rundle Mall; do I risk getting nested (suspended) for spamming on Twitter? I’ve stooped to begging for retweets from celebrities like Australia’s people’s Pope, @FatherBob [McGuire]. He would hate to be called a celebrity, but he is a future saint.

Do I rant, rave and tap-dance? Pull stunts? Is this a democracy, one only the rich can afford? I live in a granny flat, between two grannies; I feel exceptionally safe. I am not a wealthy man. I’ve already considered selling my motorbike and handful of AMP shares.

My campaign coffers were $170 at last count — and that is when I can check NetBank, what with water-logged copper cables stymying my online political assault. I am a part-time student. Not starving, hardly. But times have been better. I can relate. Now I know how the Daleks must have felt when they could not take over the universe, simply because they could not navigate the stairs.

Needless to say, the NBN [National Broadband Network] is a passion, but right now I’d settle for dial-up. [That was my first lie of the campaign.] Nothing’s been the same since 30,000+ neighbours, and I were pushed offline last November after the Warrnambool Telstra telephone exchange burnt down at around 2:32am. I was online when it happened, but only found out why the next morning. First world problems. Hashtag. Twitter joke. It was devastating for small businesses that could not access EFTPOS or pay wages in many cases. 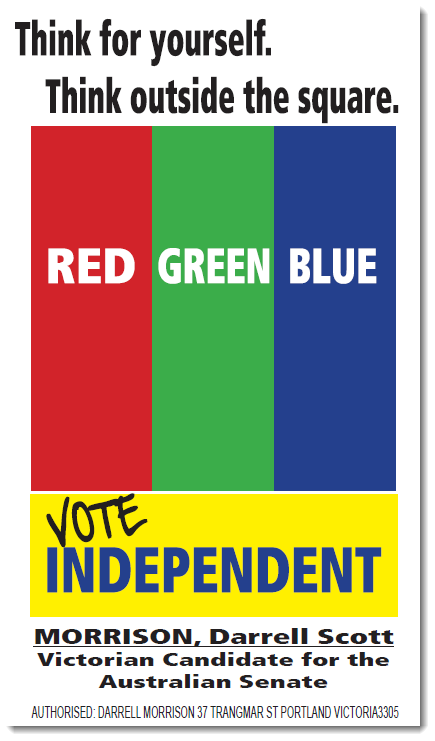 So with my canny Scottish knack at ballot draws, number 97, at least I know most people can count to 100. Gonski. Can I only convince them now to vote below that dreaded line? How do I buy 100 full-page ads around Victoria to run in the next three weeks, with no money? I have thought about attempting a viral video, I have the wherewithal for that. YouTube, Vimeo — perhaps The Drum or 7.30 Project. However, the script — it has to be funny, it has to have gaffes. People only want to see you trip, stumble and fall; that, or body parts or scandal. Without the older parties’ budget, one has to prostitute oneself, it seems, bringing the tone of both occupations right down.

Only last weekend, I taught myself Word Press and stumped up the cash for a domain http://aussieindependent.com. Then I had to code and install a PayPal donate button. Luckily, I am a geek of sorts, and spent the last 30 years in radio and newspapers — 25 in the latter. I am still on the payroll, well, at least until the Fair Work Commission makes its ruling a week before the election. My role as group marketing manager is now sub judice and under a cloud. My salary has been cut to 80 per cent for the past ten months. I am all better now, and ready to go back if they will have me. Did I ever leave!

Maybe you were expecting a sombre – predictable jobs, education and health speech? Same old, same old; after all, that is what they are regurgitating right now — re-filling the coffers of their donors, recycling cash to maintain the status quo. And many journalists, but not all, are simply too scared for their jobs to deviate from the dear old Red, Blue and Green parties. It is like Ford versus Holden. Red Lion and the Blue Oval. Tossing a coin, win or lose, same old, same old.

I know a lot about small business, hard times and State Commission housing. My mum was a waitress and home-maker; dad was a wharfie, a waterside and meatworker — and later a cleaner at Gladstone’s Boyne Smelter power-station. My policies are on my BLOG, and I hope you will read it and maybe follow me on Facebook and Twitter. It is the multi-media budget of champions — two-tenths of sweet fuck all. 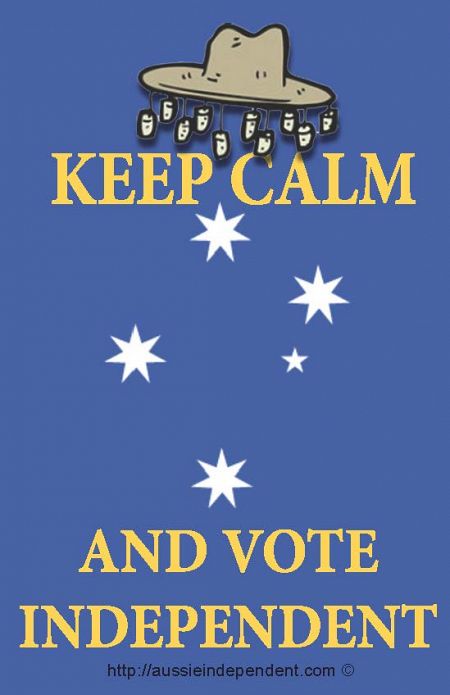 I have always been something of a political tragic, but not much of a clubman — so the party scene is not my thing, except for a short stint in the Young Libs back in my teens. It is not that I am surly, more that I was born independent. I can be swayed, I can be convinced and I want to go to the bottom of things. My opinion on refugees, human rights, justice and economic freedom do not always sit well with the big end of town.

Small business is the engine room of the economy; many struggle just to draw a wage, but they do it anyway. My interests are many and varied. I am a typical Australian with some big ideas. I also want to promote Aussie ingenuity and get up, get go. We all have a spectacular legacy, hard-won over 225 years. We have been squandering a fantastic deal of natural resources and intellectual brilliance of late. It is time to hit the party system on its head. Stir the preferences pot, and take back the wheel for the people. I am chasing some 470,000 Victorian votes.

Look for me. I am number a 1 dressed as number 97. Please do not let Batman win.

You can follow Darrell Morrison on Twitter at @dazr and @MORRISON4Senate. Independent Australia promotes Independent, non-partisan politics; read more about this here.