Politics vs democracy: The Elephant in the Room

Our society endlessly focusses on every minute detail of the political game, while almost completely ignoring any discussion of the system of democracy itself, writes Adam A. Jacoby. 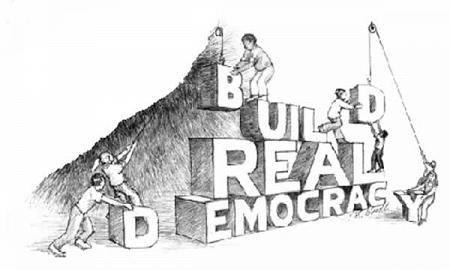 Each and every day there are volumes written about the comings and goings of our political environment. Journalists trawl over the movements in question time, the people, the policies, the gaffes and the innuendo. We dissect the speeches, body language and wardrobe of our elected leaders, and make real time assessments about our support for the people, parties and pathways being presented to us. We quietly allow this disappointing reality to wash over us.

As a community, social media has provided us a new platform to vent our frustration, share our support, promote our wit, curate our creativity and build digital communities of likeminded people. Yet, despite the seemingly endless articles and twitter posts, the conversation almost always focuses on today’s reality rather than an enduring view of our community, country and world. A reality, that more and more people are describing as inadequate and uninspiring.

Elections have become opportunities to punish and divide rather than unite and celebrate. Courage has given way to pragmatism and ideology has replaced solutions oriented critical thought. As we slowly surrender to this faux democracy, we have been conditioned by the media and the larger parties to ignore the broader and far more important question.

What the hell happened to our democracy?

Titillated by the superficial and engaged by political tribalism, my observation is that a growing political apathy and deep philosophical outrage are no longer mutually exclusive. We care so much about where we are going and, simultaneously, not enough to do anything about it until election time. We are literally trapped by an antiquated system that is delivering us less and less each year.

We have become resigned to the fact that we will be lied to pre-election, that the majority of our media will never attack the important issues or protagonists, that electorates will be bought by local concerns and that the result of this local pork barrelling will shape the national direction. We fool ourselves that an election equals democracy and that the will of the people is really being honoured.

The conversation that must take place is what should a democracy in 2014 look like? What should its fundamental principles be? What protections, checks and balances must exist to ensure that the system delivers on its promise? And, does partisan, ideology serve the needs of a diverse and multidimensional community in 2014?

These are complex questions for which multiple perspectives exist. I have my personal view, but I am not afraid for you to have an opposing view. In fact, I yearn for the discussion, I dream of the debate.

I, like many others in our community, desperately want a chance for Australia to launch courageously into a system that delivers the promise of an accountable representative system that allows a voice for all constituents, regardless of age, gender, race, religion, sexual orientation, level or education and wealth.

The fundamental commonality of ideological parties in modern politics is that they have an answer for you before the question has been asked of them. This can never deliver ‘best available solutions’ to our greatest challenges and ensures that as we lurch left and right, election after election we will never reach a destination that the majority of the country can be proud of.

There seems to be some consensus among the players in the global democracy innovation movement that democracy – real democracy – in 2014 (and beyond) should be characterised by:

1. The Will of the People

The most invidious and powerful misconception of modern democracy is that free elections are sufficient to enable a democratic society. Politicians have that which we give them: power, authority, and the ability to legislate, regulate, police and enforce.

The reality and tragedy is that often these granted entitlements are used for self-serving or minority interests to the detriment of the majority.

Democracy was always intended to be and should forever remain the will of the people. Not sometimes. Not on some issues. Not for some people. Always. On all matters. For everyone. The cynical will decry the impracticality of a consultative model, but technology now provides a mechanism for what democracy demands; that leaders who represent the community understand the desire of that community.

New Democracy has a simple but overwhelming and guiding ethos: politicians are, and will always be accountable to the People – us.

They are our agents and are there to implement our desires and to always work in the interests of the whole society.

The politician’s role is to implement our objectives and the Peoples’ agenda.

True democracy is unattainable without an informed constituency.

An informed constituency does not imply that everyone needs to know about everything. Rather, people need to know how the democratic process they are entitled to works; and they need to understand the facts, implications and choices they have on the issues that are important to them.

The most dangerous development of modern democracy is the lack of transparency between political leaders and their constituency. Save for some understandable diplomatic and security issues, there is no information that the constituency is not entitled to know or should not have access to. The very nature of democracy requires transparency. How can anyone vote for any representative if they are not privy to the information that leads to policy or where policy is intended to lead us.

People can only determine where they want to go, by first knowing where they are.

The direct descendant of transparency is accountability.

Politicians in modern democracy have mastered little but the art of obfuscation and denial. All great leaders want to be judged on their performance. All great leaders are buoyed by the challenges confronting them and the opportunity to demonstrate their capacity in a clear, transparent and accountable way. Democracy should provide for the ultimate test of performance as every few years the constituency has an opportunity to judge the incumbent leadership team on its performance.

New democracy will see all political parties provide the constituency a list of unwavering deliverables that they can and then should be judged on. Gone are the days of ‘non-core promises’.

Financial contributions from corporations, lobby groups and industry associations must end for democracy to be revived. There is no more perilous and divisive luxury in the political system than the ability for wealthy vested interest groups to have unfair access to decision and policy makers.

Corporate self-interest is the destroyer of political probity.

That the gap between rich and poor is growing in Western capitalist democracies throughout the world is an indictment on the democratic system as it operates today. That there are some who espouse a view that a country’s success is determined by the strength of its most fortunate, rather than its most vulnerable, is as undemocratic a principle as could ever be conceived.

It is not possible to return to a more genuine model of democracy without a commitment to the concepts of equality of opportunity and meritocracy. A society that creates an environment in which every child has the same opportunity to succeed, and that their success is determined solely on capability rather than social status, the wealth of their lineage, their gender, race, religion or sexual preference is destined for a future rife with social injustice, poverty and rampant crime. Importantly, equality of opportunity should not be confused with equality of outcome.

Religion has no place in policy creation. None. Ever.

As someone who spends a lot of time thinking about democracy (perhaps too much time) I can’t help but wonder why we are all too afraid to question the value of the system that has led us to this point.

Criticising democracy is usually met with opened mouthed guffaws. It is not popular to question the system that so many people have fought and died for across multiple generations. Most accept that democracy is not perfect but acquiesce to the “but it’s the best system we have” line.

The truth is, it’s not even close to being as good as it could be. We all share a responsibility to leave the next generations with a world better than when we entered it and that included the system in which their voice, aspiration and values are represented.

I sincerely hope that I already experienced the last election in which I walk to the ballot box knowing that we do not live in a real democracy.

Ten steps to save the democracy

24 May 2019, 4:30pm The next Federal Election will be focused on diversity and Independent politicians ...

Turnbull Government: Politics everywhere but not a drop of democracy

9 November 2016, 10:30am Who is behind the Turnbull Government's policy agenda on asylum seekers, racial ...
Join the conversation
comments powered by Disqus
News updates