PM Morrison fails to condemn racists and their rally

Despite many mainstream media reports, Scott Morrison did not condemn racism, nor did he condemn the racist rally, writes Noely Neate.

LAST WEEK, while IA was on its well-earned summer break, I published a piece on my blog, '2019 #Auspol election: It is all about the vibe'. It suggests that if people are desperate to get rid of the Coalition Government, then they need to do more than rely on facts and figures, they need to be aware of the "vibe" that is presented by the media.

This is because the vast majority of "Joe and Jill" voters who are not politically aligned will decide this election and, as they may not follow politics closely, will have these "impressions" floating in their heads when they vote.

The day after the "Reclaim St Kilda" rally, organised by convicted criminals (and wannabe Nazis) Blair Cottrell and Neil Erikson, was a masterclass in how media can set this "vibe".

It should be noted that the Prime Minister was out and about on Saturday, 5 January, at the cricket, yet failed to say anything about neo-Nazis.

On Sunday (6 January) the PM finally made a comment:

Let’s note that he has praised Victoria Police — fair call, as there were a heap there. But also let’s note the very careful inclusion of the "s" in 'ugly racial protests'. For the wannabe Nazis his Government have emboldened with their “It’s OK to be white” vote and Peter Dutton’s “African gangs” rhetoric, this is akin to Donald Trump’s “some very fine people, on both sides”, in relation to the Charlottesville rally. The PM's comment is pretty vaguely worded and, without pointing the finger and condemning the white supremacists/racists/Nazis/fascists (I call them "wannabe Nazis"), Scott Morrison was “having a bob each way”.

The PM's second tweet, of course, tosses in 'respect for each other' — another nod to the "both sides" rubbish. And of course, it could not be Morrison in campaign mode (which I think is almost a 24/7 state now) without the nice little racist dog whistle there at the end of 'sensible immigration policies'.

In no way could these weasel word tweets be construed as "condemning racism". PM Scott Morrison did not condemn racism, nor did he condemn the racist rally!

Sadly, Joe and Jill, seeing the many media reports indicating that he did, will be unaware of this. They are likely thinking that our PM stood up and "condemned" racism. He didn’t!

Sadly, first out of the blocks after the PM’s tweet was an ABC report, entitled:

Umm… no. No, he did not condemn the protests.

But Joe and Jill, looking at the headline and the graphic (often not reading the piece) will be sitting back thinking, look at those grubs — good on the PM for condemning them. Shame that, since this is untrue, people are giving him kudos for something he did not do.

Next out of the blocks was News Limited, with this little beauty from the Courier Mail:

(Note the tweet below is a screenshot as it varies from the headline on online piece.) 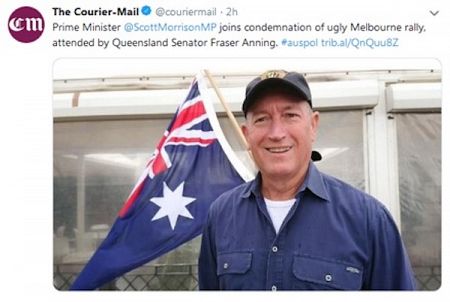 This was some pretty special sort of vibe manipulation. Joe and Jill seeing this (probably after already seeing the ABC offering) may now have the impression that not only did PM Scott Morrison “condemn” the racist grubs, he also condemned Senator Fraser Anning joining those racists at the rally.

Again, the PM did not condemn the racists, nor did he even mention Anning.

But hey, top-shelf work there — ticked all the boxes with headline, blurb and graphic to give the vibe that shows the PM in the best light possible.

Now we get to the last horse out of the gates in the big three media trifecta, Nine — this may shock you – but they also ran with ... *drum roll please*:

And again, for those in the back, Prime Minister Scott Morrison did not condemn 'ugly racial protests'  in St Kilda.

Sadly, seeing “Prime Minister condemns” stated and accompanied by a nasty-looking photo of wannabe Nazi thugs and without reading one of the three pieces above, will confirm in the minds of Joe and Jill that our Prime Minister has actually condemned these racists.

It is likely that those exact same words, “Prime Minister Scott Morrison condemns”, were also repeated on the nightly news on several channels.

So there you go kiddies. Today we have had a masterclass on how a message can be massaged and delivered to the public, which while the reports themselves is "truthful", the "vibe" conveyed with the headlines and photos is totally misleading and gives the punter at home the totally wrong message — in this case, on our interim Prime Minister's response to the far-right extremists' “wannabe Nazis” rally.

So when the racist dog whistling becomes a howl this coming election (which it will), don’t be surprised when any Joe and Jills out there in the real world don’t believe it when you accuse the Prime Minister of stoking racism for political gain. Coz, they may not pay much attention to politics, but you will be met with, But the PM has condemned racism in the past. Perhaps, keep the PMs tweet screenshot (above) handy to combat this.

Queensland Senator @fraser_anning is under fire again for using taxpayer funds to attend to a far-right rally in St Kilda over the weekend. The act has left politicians questioning his right to stand in parliament. @jenbechwati #7News pic.twitter.com/C7eS05MImR

This is the PM of Australia “both siding” it after a Nazi rally.

He is, obviously, a world-class idiot and appeaser. https://t.co/zJ6ryYOyHk

4 November 2020, 11:00am Queensland Premier Annastacia Palaszczuk's career in politics has been downplayed ...