The one positive to emerge from the most destructive budget in Australia’s post-war history is that it has silenced all those claiming Tony Abbott and Joe Hockey are honourable men.

No-one can now claim they are governing in the nation’s interest. No-one can assert they tell the truth. No-one can deny that they have broken multiple promises.

As recently as 3 May, Rupert Murdoch’s mendacious national paper The Australian ran a story headed

Here at Independent Australia, however, 25 specific broken commitments were documented in early February.

The Murdoch media have now changed tack: Okay, Abbott and Hockey have broken a few dozen promises. But who cares?

They are pushing this line quite openly now, with headlines such as ‘Our futile fascination with broken promises’ in the Daily Telegraph.

On the positive side, Fairfax publications have broken ranks with Murdoch and are calling the shattered assurances for what they are.

So, what is the official IA tally of broken promises and blatant hypocrisies?

The first 13 were documented in November.

The next 12 were detailed here in February.

1. There have been no broken promises

8. Returning the budget to surplus

11. Relations with the region

14. Spending his first week with the Yolngu

19. No deals with the Greens

25. We will not tow back the boats

That list has been expanded with several bizarre decisions, some Abbott took with no consultation with cabinet colleagues.

26. No knighthoods for Australia

“I just don't think that's realistic in this country.”

27. No public servants to be forced out of work

Abbott was explicit before the election: “no forced redundancies”.

In Parliament, however, it was disclosed that Department of Industry employees have been forced out.

“I will never ever support a people swap where you can send a 13-year-old child unaccompanied to a country without supervision — never! It will be over my dead body. How dare people!”

Now in power, the Abbott Government is sending children, including those with no family, into imprisonment at Nauru and Manus Island.

29. No cuts to education

The promise was explicit: that Labor’s funding under the Gonski reforms would be matched and “no school would be worse off” over the next four years.

“We’re not going to raise fees. I’m not even considering it because we promised that we wouldn’t.”

The budget slashed funding for university courses and exposed students to huge debt increases with the removal of caps on fees universities can charge.

“I am giving an absolute commitment that the overall levels of health funding will be maintained."

The budget announced, however, that hospital funding agreements with the states and territories under Labor will be wound back from 2017, cutting a massive $50 billion over eight years.

Before the election, Abbott was explicit in response to a direct question:

"We are not shutting any Medicare Locals."

The budget announced that the entire network of 61 community health centres will be scrapped.

According to Climate Spectator, the budget shows annual funding allocations from 2014-15 to 2017-18 for the government’s centrepiece climate change program

'... are $1.4 billion lower, or less than half, what the Coalition had promised before the 2013 Federal Election.'

34. Consultancy spending to be cut

Abbott in opposition repeatedly promised to cut spending by

“... vastly reducing the number of consultancies ...”

The May budget allocates a staggering $91 million to pay consultants from the top end of town for their advice on the sale of Medibank Private. 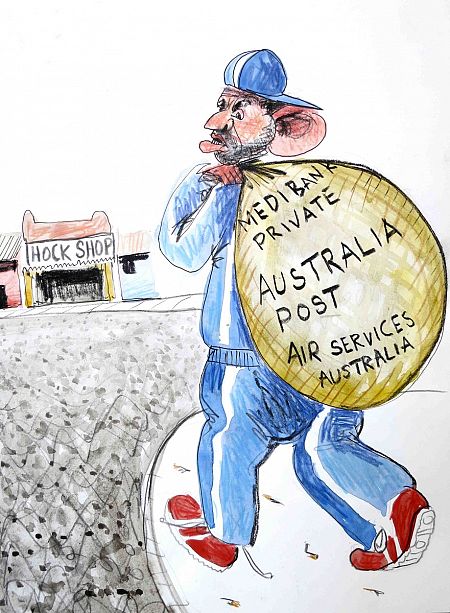 “... do whatever I humanly can in government to bring this [improved land rights for Aboriginal people] about."

As funding for research and for legal aid for land claims across Australia is critical, all Aboriginal land claimants were looking expectantly at the May budget.

37. Using the state of the economy as an excuse for breaking promises

Melbourne ABC Radio host Jon Faine challenged Abbott directly on the likelihood he would blame the state of the economy for changing his policies after the election.

"It is an absolute principle of democracy that governments should not and must not say one thing before an election and do the opposite afterwards.”

Yet after the election Abbott has done precisely that. Forty times.

38. This will be a government of no surprises

The one secret they didn’t tell us before the budget is that the Federal government plans to save $80 billion over the next ten years by giving the states less money to run our schools and hospitals.

The other big surprise in this budget is that, over the government’s first four years, it makes hardly any net savings at all.

39. The burden will be shared evenly

Abbott and Hockey repeatedly said that the heavy lifting would be shared across the community.

All reliable analysis shows that, in contrast, the poor are hit hardest – losing as much as 10% of their income – while the rich are barely slugged at all.

40. Families should be off limits in politics

Abbott and his wife shamelessly exploited their three daughters through the 2013 election campaign to construct the perception that theirs was a functional nuclear family.

Now, with daughter Frances in the spotlight over what appears on the surface to be corrupt payments for her degree, Abbott declares:

“I think family should be off-limits when it comes to party political contention."

Questions arising include these:

Has there ever been a government in any modern democracy with a record of duplicity this extensive so soon in a term of office?

What do Abbott’s colleagues make of this tawdry performance? How long before Abbott is challenged by Malcolm Turnbull or another ambitious starter?

Meanwhile, what does it do to the nation’s moral standing and sense of pride and confidence to have a proven liar and conman as elected leader? 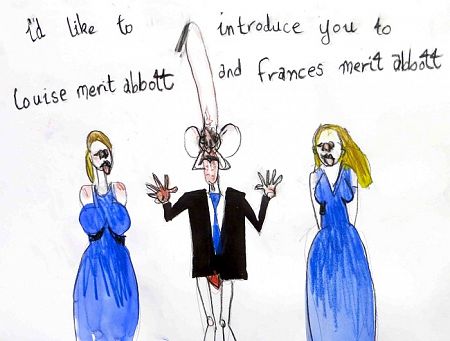