The increase in truancy is reaching alarming depths. In Parliament.

Some sort of immediate NGO intervention is required in political states and territories.

There should be an immediate cessation of government handouts, benefits, pensions, travel allowances and work for the dole scheming in upper and lower houses and a moratorium on sleeping, yawning, breaking wind and inane nodding behind inane leaders for the TV cameras.

We have to enforce the notion of mutual obligation. We just can't keep dishing out those handouts every week.

Truants should be sent to Malaysia for offshore whipping. Or sent to Villawood. Same same.It's pointless sending them to Bangkok because party whipping is already a staple of the groupsex tourist industry. And some of them have probably been there and done all that on previous study tours in Asia examining the medieval tatting techniques of levitating nuns. They would be having pleasure where they should have pain.

Look, what adults mutually consent to do in their own chamber is one thing. Nobody's business. Maybe.

I'm big on the 'cause no harm' clause.


But what these supposed adults do in the parliamentary chamber without our prior consent is our business.

Once again we've come to the end of another week of a rare parliamentary sitting where the doings of parliamentary business seems to consist of self-serving narcissistic obsession with themselves and one another. Planet FP is directly aligned with Uranus. Let's not go there. Federal Parliament is behaving like a rogue state within a state. And it ain't confined to Canberra alone.

Are our pollies all overdosing on red cordial or what?

If you look at the headlines this week, it’s all about THEM.

Where is General Haig when you need him?

Brother and sister citizens, lend me your tears.

Join me. Let us suck Facebook and out-tweet these prize twits. Let us bring about an 'Aussie spring'.  Let's call our colour and movement the 'Boronia Revolution' and let us make democracy the coin of our Realm.

I've thought of a really rad motto: "By, for and of the people". It's so out there. It's already been rejected by focus groups so I know it will definitely work!

Kochie and Mel could be the titular heads. I'm happy with that. Seven/Eleven. 7/11. Love it. Love it! From Sunrise to High Rise. Australia for Australians! Now I'm slurping the red cordial.

Let us place additions on our most wonderful Coat of Arms, and add beloved Possums and Wombats (hairy nosed, because we've just found one in Victoria for the first time) and Platypussies, Dilbys and dills, Tassie Devils and Fuzzy Wuzzy Angels and let us pay homage to our migrant species and also feature Rabbits, Cane Toads, Leo Sayer, the Gumnut Babies, Dung Beetles, those twin sylphs, Syphilis and Gonorrhoea Fora Tosca.


That'll work! You know, never mind about showing us respect. What were those dudes that went AWOL thinking?

What about the Queen. Were they thinking of our Head of State? Were they giving Big Bling Mamma over the ocean R.E.S.P.E.C.T?  No way. I wouldn't be surprised if none of them even gave her a second thought.

Strange how it only involved Liberal Party pollies. I'm a great one for conspiracy theorems.


Cop this. There is the peculiar story of Victoria's Women's Affairs Minister Mary Wooldridge who was locked out of the parliamentary chamber on Thursday, thereby ensuring death to the Baillieu Government's own controversial equal opportunity bill, that would have given faith-based organisations the right to reject workers on the grounds of religion, sexuality, marital status and gender and rob the Equal Opportunity Commission of much of its strength and safe-haven  standing.

Maybe Mary's conscience wouldn't let her do it. Her political tribe is not pleased with her.  Even if some are, they don't have the political courage to speak up. Mary's not speaking to us either. She's not going to tell us why she didn't front until next week. I suppose she has to get a letter from Headmaster Ted.

And what about Federal Opposition Whip Warren Entsch enjoying a bit of political S & M – especially with M. Turnbull – naming and shaming Malcolm and four others in a party email-out dead-set destined for the front pages?

I did a little amateur vox pop and no-one could remember the names of the four others who also copped a public flogging: Ian Macfarlane, Alby Schultz, John Forrest and Luke Hartsuyker.

Do you think Mary and the boys were hanging out together? Do you think there's a new party in the offing? Were they abducted by the Tardis? Will it be called the Lib Dems?

If Entsch was doing his Master's bidding and all this was designed to leave a few lash marks on Malcolm's back, it has backfired.

It's drawn our attention to his backbone. He's got one. That's a modern twist on olden times.

He's already shown the Australian people that he's one of the few politicians in Federal Parliament who is prepared to put his principles on the line — even to his own political cost and detriment.

That sort of political courage should stand him in good stead when push soon comes to shove between him and Abbott. Abbott's inability to graciously shake Turnbull's hand the other day – when it was proferred – was infantile. He relented, but not in enough time to avoid the close encounter being filmed for posterity and replays.

What was it that President Obama said about unclenched fists?

Shan't be sending Abbott off to mediate in Peace Talks anytime soon, but. And I'm about one of only three women in the world who thinks he looks hot in budgie smugglers! Now I think they were canaries nesting in there. Even then, I'm not sure there was a pair.

And Tony Abbott accepting blood money from cancer purveyors is tantamount to trafficking in blood diamonds.

How pathetic and hypocritical from a former Health Minister. Dr Death Abbott, all you're doing is spreading the cancer that has clearly infected all the internal organs of the Liberal Party. 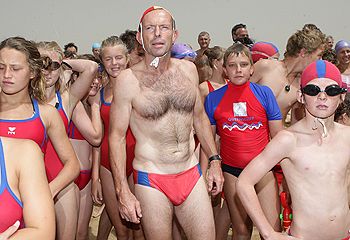 I want to see a counter ad — fill up his budgie smugglers with cigarette butts and show the crown jewels all ulcerated and scabby and diseased and blackened and gangrenous.

Stand aside, you and Julia both. We need some excitement, some political passion. Some vision. Some reconstruction. Some reform. Some reconciliation. You two are has beens before you even were. We need a change. Bring back Rudd and Turnbull, for a start.

Then why don't you two set up a PR company. You've got so much in common. Duplicity is just one of the characteristics you share. You'd secure some beaut gold ticket accounts — gambling, smoking, all good motherhood stuff. You'll make a killing with your combined inside knowledge. See if some of your former staffers will employ you.

Is there anybody out there who is prepared to take it upon themselves to do an attendance count on our pollies, starting with Federal Parliament and working your way around the country? Post it online. Start a dedicated website. How many days does Parliament sit these days?

They're so blooming lazy, they'll soon be Skyping in or governing by video, Facebook and Twitter. They won't even bother turning up in Parliament. Schoolkids will visit and the place will be empty. We'll have to put cardboard cut-outs where once were pollies.

In fairness, though, we don't always know what is happening in the private lives of public political figures, and it doesn't always involve adultery and sexual peccadilloes or pickled dills for that matter and so we should make some space and tolerance for those sometimes serious things that happen in life.

Clearly, there are some pollies who work their butts off. And I'm not talking fags. And some who work the butts off their staff. If you're amongst them, you must get fed up with being eclipsed by the antics of some of your colleagues.