It’s hard to imagine where Abbott can go now, after Clive and Al, side by side, foreboded a Budget utterly smashed and an early dinner.

A senior ‒ really senior ‒ Cabinet Minister told me half an hour ago:

“Tony is unafraid of the polls, and he’s as likely as not to go to a double dissolution. He really is.”

I dare not think this is so. But…

The only item they will get through now will increase the deficit — and no cuts to pensions, the ABC, SBS, and CSIRO will be tolerated by Palmer, Labor, the DLP, the Greens. This leaves them, this year ‒ the Truss-Abbott gang who can’t shoot straight ‒ sixty billion in the hole and next year a hundred billion.

And they have no Plan B … and they never had one.

And Morrison is proposing war crimes at such a rate, the GG will have to sack him. He now proposes sending genuine refugees and their children back to torture and death in Iraq, and paying their fare there — much as one might offer champagne and a chicken dinner on the dining car of a train to Auschwitz. At the same time, he is legislating to send home asylum seekers if there is a 50.01% chance they won’t be killed or tortured on their return.

The Senate might move he be psychiatrically investigated. He is certainly much, much crazier every day.

A graceful fat man like Les Murray, Richard Griffiths, Nye Bevan, W.C. Fields and W.G. Grace,  he steers each delivery to leg and beams at the bowler and dares you to classify him. And you can’t.

It’s a mistake I think to imagine that like, say, John Elliott, he wants only money ‒ more and more money ‒ as a constant, feverish, lifelong, punishing pursuit. He’s been there, done that. His $1 billion personal fortune, put in a bank, would earn him $961,538 in interest every week.

What he wants now, I think, is what Al Gore has — an Oscar and a Nobel Prize, or a seat in the House of Lords, or a bronze statue, three times life size, in the foyer of the United Nations.

It’s a mistake, too, I think to equate him with one of the great benevolent American capitalists like Rockefeller, or Sulzberger, or Ted Turner — a wily, flush-faced vessel of noblesse oblige.

What he’s most like is one of those literary/political gadflies ‒ GBS, or Gore Vidal, or P.J. O’Rourke or Denis Healey or Gerry Connolly ‒ a maestro of what Shaw called ‘uncommon sense’ and the sudden, arresting phrase that seems, for the moment, eternally true.

It’s worthwhile too to try and find among his buoyant swift utterances (he speaks as fast as Ken Howard and uses verbs ‒ waterfalls of verbs ‒ where most politicians use elongated bureaucratic abstract nouns long leached of any meaning but procrastination) anything you disagree with.

Are we all, like him and Al, citizens of the globe? Of course we are.

Do we care about the planet? Of course we do.

Do we want Tony Abbott to stop telling lies and degrading our politics? Absolutely.

In his speedy shuttlecock declamations, he reminds us of Burke, of Bacon, of Demosthenes, of Socrates — men who thought from time to time about larger things and, with their startling conclusions, risked their careers and sometimes their lives.

It has been the media’s biggest mistake to think him just another Queensland rogue like Hinze. He is more like the better Queenslanders Theodore, Killen, Katter, Beattie, Gerry Connoll, Bille Brown.

Or, among citizens of the world, he’s more like … well … King O’Malley.

Am yelped at by Pyne in the Senate courtyard.

He is superbly dressed and very loud. Loudness is a tactic that compels agreement, obedience, craven compliance.

“Hi Bob. I saw you in the Gallery. What are you down for?”

“For the overthrow,” ‘I wheezed, “of Abbott this afternoon.”

He yelped with laughter and carried on. It is true what a respondent said: Rik Mayall is the perfect casting.

A palpable jumpy turbulence in Aussies, not apparent yesterday. An appointment with a Shorten staffer has been delayed. Tactics, doubtless, are being closely discussed.

Is Abbott, as some say, crazy-brave? Will he bring on a Double Dissolution?

He stuck, after all, to his PPL though it’s wrecking, currently, the Coalition and losing a thousand votes an hour. What have he and Clive stitched up?

I eat Weet-Bix and wait with interest. 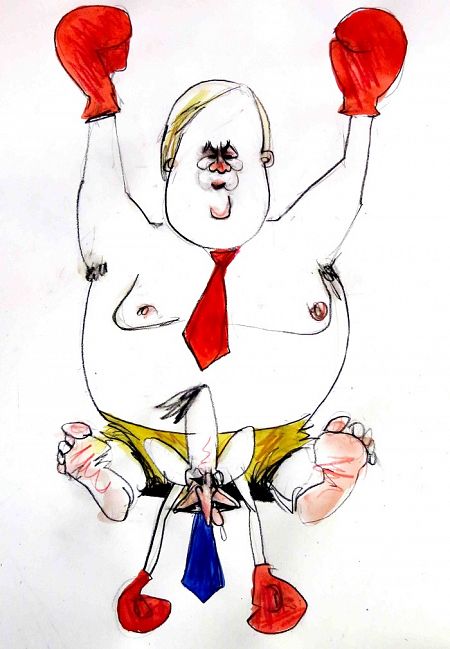