Based on Ashbygate, if Watergate happened in Australia, Nixon would need to confess before our old media would report the scandal. Victoria Rollison comments. 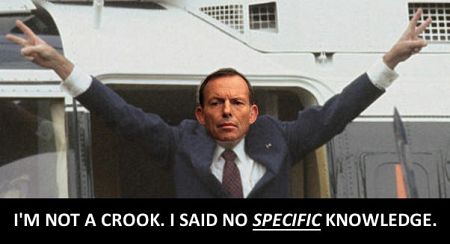 THE WATERGATE SCANDAL was, apparently, rather big news at the time.

People went to prison, the President of the USA was forced to resign, and investigative reporters Bob Woodward and Carl Bernstein became household names. Nixon’s Republican Party came undone through a conspiracy to find dirt on their rivals in the Democratic Party. Dirt that was to be used in an election smear campaign. In the end, they sufficiently smeared themselves out of office, when Nixon’s replacement, President Ford, lost the 1976 election to Democrat Jimmy Carter. As scandals go, I can see that this one was very newsworthy. When President Nixon said he had no knowledge of the conspiracy, it took the work of investigative journalists to prove he was lying. Woodward and Bernstein investigated this conspiracy for two years. It was the story of their careers.

The Watergate scandal has left an indelible mark on our language – political scandals are now nicknamed ‘gates’. In Australia, we’ve had the famous OzCar affair (Utegate), which contributed to the demise of Malcolm Turnbull’s leadership of the LNP opposition. Over the last two days another ‘gate’ has been born – Ashbygate. This story has only really been properly investigated by online media* — mainly Independent Australia, through editor David Donovan and contributor Vince O’Grady, and Vex News). After thousands of words were exchanged via independent news sites and social media about the very clear and obvious conspiracy behind the Peter Slipper sexual harassment case, it wasn’t until Federal Court Justice Steven Rares threw the case out on Wednesday that the mainstream media decided the story warranted attention. But why had it not received any attention before?

The similarities between the Watergate, Utegate and Ashbygate affair are obvious — they are all examples of a political party getting so obsessed with discrediting their rivals they end up damaging themselves. Rather than inspiring the voting public through their plans for the nation, they instead try to win by damaging their rivals. It’s like a runner who knows they can’t beat their opponent with speed and fitness, so they try to club them in the knee and ultimately end up tripping on their own weapon. Dirty tricks — with the dirty tricks backfiring and the innocent victims of the dirty tricks winning out. It’s the classic hero/villain tale being played out on a very real political stage. It’s no wonder the news media loves this sort of story. It’s the type of story that an investigative reporter would be proud to expose. It’s the type of story that gets a journalist’s name on the front page. Except for – well – here in Australia — right now.

Justice Rares’ findings concluded the bleeding obvious, and at the same time reported the one fact that the mainstream media had refused to go anywhere near — that James Ashby had concocted the sexual harassment claim to deliberately damage Peter Slipper and, in turn, to destabilise the Labor government, and ultimately, perhaps, to topple it altogether. As Justice Rares said [IA emphasis]:

“There was no hint in contemporaneous texts with his friends, of Mr Ashby feeling upset as a result of sexual harassment. Rather those texts suggested that he was planning to use the record of his texts with Mr Slipper to empower others in a way that would affect the balance of power in the House of Representatives.”

The key three words in this quote are ‘to empower others’.

Mal Brough was named by Justice Rares as being up to his eyeballs in Ashbygate. That seems pretty serious to me. The recently pre-selected Liberal candidate for Peter Slipper's seat conspiring with the Speaker’s staffer to launch a spurious sexual harassment claim in order to affect the government’s balance of power. We know that Christopher Pyne met with Ashby before the court case. This too is incredibly serious. Is a senior Liberal, the Manager of Opposition Business no less, engaged in a conspiracy to bring down the government? And what about Abbott? Remember that Nixon’s major miscalculation in the Watergate scandal was to deny knowledge of the conspiracy. When recorded conversations in the White House proved he was lying, he was forced to resign, his credibility ruined.

Abbott has always claimed he had ‘no specific knowledge’ of Ashby’s court case until it was announced by Steve Lewis on Saturday April 21. When it was revealed that the press release that Abbott’s office sent out about Ashby’s court case was written the Friday night before Abbott was meant to have any specific knowledge of the conspiracy, he came up with the wholly unconvincing story that his server timestamp was wrong by 10 hours. You would expect, with such sordid and damning evidence of a full scale conspiracy on the part of the Leader of the Opposition, that the mainstream media would be crawling all over this juicy and, in my view, incredibly alarming news story. But they’re not.

I’ve spent some time trying to work out why this is and I haven’t been able to decide which of the following scenarios is correct (perhaps it’s a mixture of all three):

1) Mainstream political journalists don’t actually have any investigative skills. They physically cannot report political news without trying to give it some sort of ‘they’re just as bad as each other’ context. They also can’t uncover anything for themselves, preferring to wait for others to do the hard work for them. In this case, it was Justice Rares who provided the facts that they should have discovered for themselves — along with independent writers and bloggers. Mainstream journalists will turn even the most shocking and newsworthy political events into chatter about political tactics, because this is the only way they know how to report politics. For an example of this, read Michelle Grattan’s take on Ashbygate.

Some of the key areas of the Ashbygate conspiracy which need to be investigated, but so far are being ignored by the mainstream media are:

2) Many mainstream journalists must have recognised from the very beginning of Ashby’s court case against Peter Slipper that there was every likelihood the Liberal party were in some way connected to the scandal. There is no way that all of them could have missed the coverage on independent and social media, yet still they chose to ignore it. Could their reluctance to give proper coverage to the conspiracy now be an attempt to save face by downplaying a story they have thoroughly missed for the last ten months? Are they trying to reduce the importance of the story by reporting it as yet another political spat like all the others?

In Lenore Taylor’s fairly decent report of the story, that coincidentally was published on 14 December, but dated as 15 December (maybe there is something wrong with the SMH server clock, and my server clock?), she does her best to downplay the entire story. Starting with the headline: ‘It may not be Watergate but more explanation is needed’ and including this paragraph:

'It may not be a conspiracy to rival Watergate, as Labor is alleging. The Coalition may not be ”rolling in filth” as Julia Gillard so colourfully put it. It may not even be a conspiracy that goes beyond those already named in the judgment as alleged co-conspirators. But it does raise some questions. And Brough has not been transparent.'

I wonder if Taylor has ever considered that Watergate may actually not rival Ashbygate? Nixon was, after all, gathering dirt on his rivals who were in opposition, readying himself to have ammunition in an election campaign. He was not conspiring to bring down a government. So which conspiracy is more serious? Only one of these scandals threatened the stability of a nation’s democratically elected government?

3) Are the mainstream media steering clear of a story that doesn’t suit their favoured narrative of the LNP Opposition being ‘successful and effective’ and the Labor minority government being ‘dysfunctional and chaotic’. If they report the scandal from the perspective that it is a huge news story – a story with the potential to destroy Abbott’s chances of winning next year’s election – are they admitting defeat in their two year campaign to undermine the Gillard government? Will the mainstream media be forced to concede that they’ve been complicit in Abbott’s campaign to destabilise the Federal government? Will they have to also report that Abbott has been spending his time in Opposition plotting scandals and smear campaigns, instead of formulating an alternative vision for Australia? Is this all too much of a shift in narrative for the mainstream media to cope with?

Stories like Ashbygate don’t come along very often, and that is why when they do, journalists usually sweep in like seagulls on hot chips. 2012 has not been a good year for the mainstream media. With falling advertising revenue and redundancies taking their toll on newsrooms across the country, you would think that a scandal like Ashbygate might reinvigorate some investigative journalistic pride. But alas, once again the mainstream media disappoints, letting down their audience who deserve to know the truth behind the Ashbygate saga. Thankfully independent and social media continues to fill the void and that is where I will happily continue to follow this unfolding front page news story.

* Editor's note: We would like to acknowledge that some in the mainstream media have, in fact, covered this issue — notably the very fine investigative journalist Jessica Wright in the Sydney Morning Herald. However, it is quite true to say that Ashbygate has not received anywhere near enough scrutiny in the mainstream press — and almost none at all from News Ltd.