Only Gillard plan was to knock off Rudd

Questions remain as to whether Julia Gillard, Mark Arbib, Wayne Swan and others forced Kevin Rudd to abandon the ETS in 2010 simply to bring down his prime ministership, says Kim Peart. 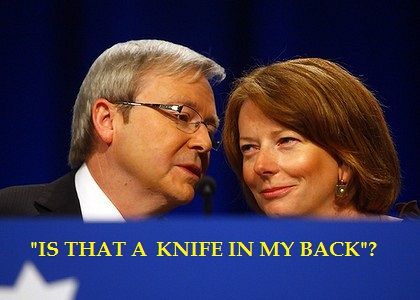 The whole of Australia was puzzled at the time, that a first term Prime Minister could be removed so swiftly in the dead of night.

Should there have been a judicial inquiry into the matter, to put all the facts on the table, so Australia could know why?

Unfortunately, the affair was hushed up, the facts locked away and as if there was a normal process in train; Kevin Rudd was given the highly responsible position of Foreign Minister, representing Australia to the nations of the World.

If Rudd was such a chaotic Prime Minister, why would he be given such a highly important position and in the Cabinet?

There was a buzz about gaining our first female Prime Minister, but there were matters unsettled and, as it turns out, quite unsettling.

The months roll by, Labor suffers massive losses at the last election and only just secures Government with the aid of Independents and a Green.

The Foreign Minister makes his mark on the world scene.

Then, in the course of his duties, rumblings from Down Under lead to Kevin Rudd's shock midnight resignation from Washington and the Prime Minister declares a leadership spill.

The outcome of 71 Labor Caucus members against Rudd and 31 for is now history and Rudd goes to purgatory on the back bench to be an ordinary MP.

Will this be the end of the matter?

Of all the stories covering the Labor leadership maelstrom, one observation stood out above the rest like a lifeboat from the Titanic.

A straight-shooting report from the former member for Bennelong, Maxine McKew – who successfully cut down John Howard's beanstalk and felled that former giant of the Liberal Party in 2007 – offered new and penetrating insight into the turfing out of Rudd as Prime Minister.

Writing in the Sydney Morning Herald, this well-known and highly respected former ABC journalist put her credentials on the line, when observing how Julia Gillard successfully persuaded then Prime Minister Kevin Rudd to drop the carbon tax and noted:

"At some point the advocacy turned into a threat."

McKew points out how it was made clear to Rudd that the survival of his government was conditional on abandoning the Emissions Trading Scheme.

This proved to be a fatal blow to the Rudd Government and led directly to the leadership coup two months later, in the midnight of the knives of June 2010.

"There was only ever a plan to knock off Rudd."

If Maxine's observations can be believed, we may now wonder if the chaos we hear about Prime Minister Rudd's managerial style was in part fuelled by the simmering agitations aimed at his removal.

Julia Gillard had clearly demonstrated her ability to influence Rudd, even to overturn a core promise made to the Australian people.

That there was no judicial or Labor Party inquiry held into the affair may now be well understood — as the truth could have become an indictment of all with blood on their hands.

If those who made that midnight pitch for power have a guilty conscience, this could help to explain the high level of frenzied vitriol, beyond all reasonable political language, that has poured forth from Labor ministers in the past week.

Only by screaming could they drown their inner voice, which was telling them they were wrong; and rather than retain the dignity of government, elected representatives of the people became a rabble — hell-bent on killing off Rudd's return to the highest office.

When a mob screams from the top of a pile of stones that they are right, there is no reasoning, simply rule by force — and those who dared not run with the mob would be at risk.

Then a very strange thing happens within hours of the leadership ballot.

One of the key players in Rudd's demise as Prime Minister, Senator Mark Arbib, Assistant Treasurer and Minister for Small Business and Sport, resigns as a minister and from the parliament.

This singular act from one of the victorious mob is quite puzzling, and might be best explained in a story by Tony Wright in The Age, where he wrote:

"Graham Richardson, for years the hardest and most feared of the NSW Right gang, put it more succinctly on Sky TV. Arbib, he said, had told him on the phone a few days ago that ‘he was sick of being covered in blood’."

Considering the popularity of Kevin Rudd and that he remains in Parliament, it is hard to imagine that the test of Labor leadership is dead and buried; especially now that the events of June 2010 have been revealed as a totally avoidable coup, that Labor ministerial behaviour has been shown in public as disgusting, and since the Australian people have been left feeling cheated of the leader of their choice.

With the Labor ship of State now hulled and slowly sinking, we may wonder how long it will take to go down, opening the way for the next conservative government in Australia.

Deck chairs can be moved around, but redecorating ministerial offices to hide the blood of the coup, may not save the ship.

There is little chance of an inquiry now to reveal the facts of Rudd's demise as Prime Minister, but the people will have the final say.