Night of the generals: Gleeson and Brandis at war

Not for the first time, George Brandis has shamelessly deceived us. Now he stands accused of deceiving our parliament and must resign, writes contributing editor-at-large Tess Lawrence.

His repugnant attempt to defile the office and standing of Australia's Solicitor-General is untenable.

Not for the first time has he shamelessly deceived us and now he stands accused by the second law officer of the Commonwealth of deceiving our parliament.

As the Commonwealth's first law officer, Attorney-General Brandis QC pushed Solicitor-General Justin Gleeson SC too far, forcing him to publicly deny assertions by Brandis that he consulted with Gleeson before issuing a shonky edict that any requests for advice from the SG's department must first be vetted by the Attorney-General.

In an outrageous slur on Gleeson's personal and professional integrity – and a violation of the enshrined independence of the office both hold – Brandis said that he had consulted with Gleeson about the directive. He hadn't. He didn't. It was a fabrication.

Why did Senator Brandis think he could get away with such a lie?

Obviously, he thought Gleeson wouldn't publicly contradict him and that perhaps rather than jeopardise his position, Gleeson would just cop it and say nothing; be a mere lackey to Brandis and the Coalition, and not rock the boat.

Gleeson makes it clear, page after page, paragraph after paragraph that Bungling Brandis must go. https://t.co/nQInHOxPOP

It has been a long night for the generals. Gleeson and Brandis are at war.

Curiously, it is not a criminal offence to lie in Federal Parliament and, while ever Brandis remains the AG and a wholesale peddlar of such, nor will it be, anytime soon.

Only in Queensland is lying in parliament deemed a crime — ironically the Senator's home state.

It is heartening that Gleeson has the moral fortitude and professional leadership to challenge and expose the Brandis untruths. We are owed as much by our leaders, but more often than not we are denied access to the truth.

Such public accountability and transparency is a rare thing.

Gleeson is doing the right thing. He is a whistleblower and, hopefully, his example will encourage others to call out political lies and systemic misdeeds.

This bad behaviour by Brandis must stop. He cares little for the doctrine of the Separation of Powers, we know.

Brandis sat beside Gillian Triggs in the Senate enquiry and fed questions to committee members. He's a disgrace https://t.co/yZJnsHTtgB

Under the prime ministerships of John Howard, Tony Abbott and Malcolm Turnbull, he has instead busied himself with the accumulating of powers and with cementing his own political ambitions and fiefdom. Silly twit.

His longstanding man crush on Tony Abbott renders him a stalwart of the notorious Monkey Pod Round Table, a political cell that diligently works for the second coming of Abbott the messiah, dedicated to undermining PM Turnbull at every turn. This it does with alarming alacrity and ease.

Time and again, the overblown Brandis' self importance has been punctured by his flawed judgement, decision-making and political buffoonery.

Who can forget the recent spectacle of the vainglorious Brandis making a hasty exit from the microphones after the Don Dale Royal Commissioner debacle, when Brandis appointee, former Northern Territory Chief Justice Brian Martin was forced to resign within hours over perceived conflicts of interest.

Brandis has long abused and defiled the standing of the office he once swore to uphold.

So much so that months ago, we called for his resignation.

In June, Independent Australia, in an article headlined 'George Brandis should Braxit', pointed out that

'... the Attorney-General is an obscene and megalomaniacal law unto himself.'

George Brandis should Braxit https://t.co/DpXIPoJI2W A clear-eyed view of this awful Attorney-General

He is unquestionably trying to corrupt and compromise what is left of our shabby democracy, at least as far as the body politic is concerned.

Since then, numerous other offences have been added to the charge sheet. The man is a liability to our national security.

Yesterday, on ABC Breakfast with Fran Kelly, Brandis again spun a web of fibs and half truths, again lying and still insisting the Solicitor-General had been consulted.

Listen to the audio of that interview here.

Shadow Attorney-General (and former Attorney-General) Mark Dreyfus has called for Brandis to resign and earlier on Kelly's show said that Brandis was now “lying about lying”.

Dreyfus has also been fighting Brandis in court, inside Parliament and in public, to gain access to the Brandis work/appointments ediary. Last month, Brandis lost a second court battle and has been ordered to hand over the diary.

And you can listen to the Dreyfus interview in full here.

In his 48 page robust submission, chokkers with facts, dated 3 October 2016 to the Senate Legal and Constitutional Affairs Committee, Solicitor-General Justin Gleeson pulled no punches about Brandis.

The document was refreshingly devoid of the usual spin and pettifoggery we are almost hourly fed by our governments and institutions. Gleeson exposed Brandis for the sly and manipulative liar he clearly is.

In section 29, Gleeson in unequivocal in his denials that he was ever consulted, and trashes the lies told by Brandis and any assertion that Government agencies and departments are required to go through the Attorney-General before seeking the Solicitor-General's advice. 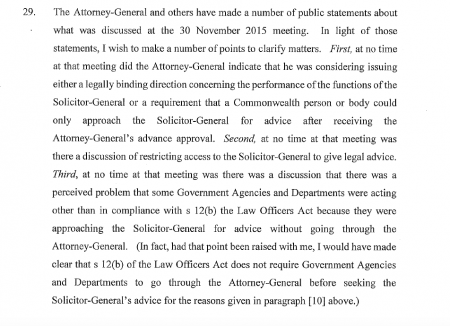 Gleeson's submission is a triumph for the people. It is uplifting for us that a legal guardian is prepared to stand between us and the abuse of power that is manifest in Brandis, his "superior officer" .

As the Brandis directive stands, Gleeson should probably have sought the permission of the Attorney-General to give his advice to the Senate Inquiry. Pathetic.

George Brandis, who defended the right to be a bigot, says Tony Abbott was a victim of 'most shameful' bigotry. pic.twitter.com/0N9P58rOZ5

Hey #Brandis, is there a record of your conversation with the Solicitor-General in your diary? Perhaps you could show it to us? #auspol

Subscribe to IA for as little as $5 a month.