Attorney-General George Brandis is at it again, trying to corrupt democracy, protocol and age-old legal doctrines and supplant them with his own warped vision. Contributing editor-at-large Tess Lawrence reports.

ATTORNEY-GENERAL GEORGE BRANDIS QC is an obscene law unto himself and a legal liability for our Commonwealth.

He is unworthy of continuing in the role of the nation's peak law guardian.

His latest insidious assault and indecent interference upon the independence of Solicitor-General Justin Gleeson is an untenable violation of our civic and judicial rights, and a repudiation of that sacrament of  democracy — the doctrine of the Separation of Powers between our parliament, executive and judiciary.

One doesn't need to take silk to know this.

In a definition clearly ignored by Brandis, the Government's own education website explains it thus:

'Under this principle, the power to govern should be distributed between the Parliament, the Executive and the Judiciary to avoid one group having all the power. Each group should work within defined areas of responsibility so that each keeps a check on the actions of the others.'

What part of this definition doesn't George get?

BRANDIS AND HIS DOCTRINE OF ACCUMULATION OF POWERS

Brandis has trashed this doctrine, supplanting it with his own: the Accumulation of Powers. Attorney-General George Brandis in a cheery moment – power becomes him. (Image via news.com.au)

Laura Tingle's shocking revelations in the Financial Review are unequivocal:

At issue is a move by Senator Brandis – a few days before the election was called – to stop Solicitor-General Justin Gleeson, SC, from providing advice to any arm of the government without Senator Brandis giving him approval.

The advice of a solicitor-general can be crucial in politically contentious issues faced by the government – such as on asylum seeker policy. But it also provides advice directly to a range of government entities from the office of the Governor-General to the Australian Taxation Office.

...On May 4, Senator Brandis's office sent Mr Gleeson a letter outlining directions that were tabled in the Senate that day, with immediate effect, and which ruled that no one in government, including the Prime Minister, could seek the Solicitor-General's advice without getting permission from Senator Brandis.

...What made the direction more disturbing for the legal bureaucracy of Canberra was that a range of officials – including the Office of Legal Services Coordination in the Attorney-General's Department -  were instructed not to consult the Solicitor-General or his office, or to notify him of the change.

...The Office of Parliamentary Counsel – which has the job of putting the government's legal wishes into legislative form – raised concerns with Senator Brandis's department that neither Mr Gleeson nor his office had been consulted about the move and this might not be consistent with the Law Officers Act 1964 which sets out the Solicitor-General's responsibilities.

What was more, it emerged that officials within the Australian Government Solicitor's office had also not been consulted and had concerns about how the new directive might work in practice.

Tingle's exposé that Attorney-General Brandis kept the construct of this alarming and dangerous grab for absolute power secret from Solicitor-General Gleeson is disturbing. The lack of transparency, due process and public accountability is reprehensible.

Moreover, the Brandis directive sets himself not only above the Law — but above all Australians, including the prime minister and governor-general.

It means that if any advice was to be sought of the solicitor-general, even in relation to Brandis himself – indeed about this very directive – Brandis would be able to vet-or veto it. This is intolerable.

“Dreyfus said this was another instance where Brandis had attacked the independent functions of agencies within hi…” https://t.co/VSgm3UxG22

We are right to question his motives on what appears to be legal lunacy that smacks of both personal and political paranoia.

What are Brandis and the Coalition hiding, that they are terrified of us finding out about and being exposed during the election campaign ?

Is that the main reason for the Brandis directive? Surely the directive is invalid if not illegal. As is our incarceration of refugees and asylum seekers, our shameless people trafficking and outsourcing of black ops in offshore detention centres along with our legal and moral liability and responsibility.

Given the crimes our successive governments commit in our name, we are collaborators in the murder, torture and rape of such refugees.

HOW DOES BRANDIS GET AWAY WITH IT?

Brandis has not only rewritten and imposed his own rules of governance and conduct, but is also guilty of dragooning staff subordinates into his secretive collusion.

What the hell is going on? How is Brandis allowed to get away with such repugnant disregard?

Why is Brandis so keen to emasculate the critical role of Solicitor-General Justin Gleeson? One reason is because Gleeson was appointed by Mark Dreyfus.

'Sadly, this is just the latest in a pattern of behavior from Senator Brandis. His cack-handed attempts to undermine racial discrimination law, his declaration that “people have a right to be bigots” and his appalling attacks on Gillian Triggs and the Human Rights Commission, resulting in a successful censure motion against him in the Senate, have already left his integrity at a low ebb.'

George Brandis has once again proven he is not fit to be Attorney-General of our country. My statement: https://t.co/iNVnmQSfzj 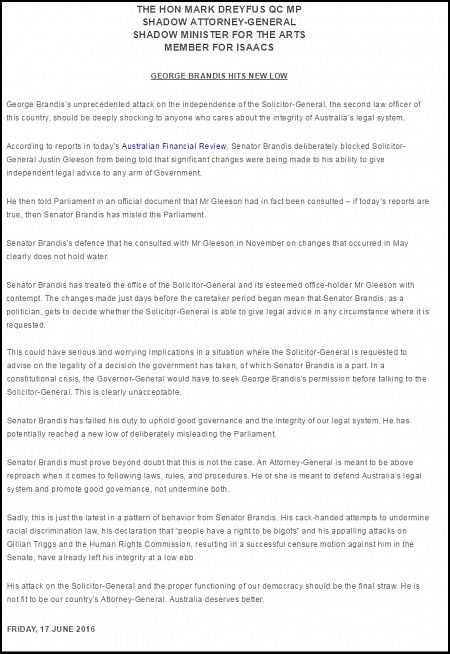 So they have. Left and right handers aside, Brandis is nimbly ambidextrous when it comes to legal protocols and conventions, and his list of ugly priors, include evading moral and political responsibility for several letters written to him by "mad" Man Haron Monis, the notorious killer and hostage taker at Sydney's tragic Lindt Cafe siege.

Indeed at times, the outrageous and sustained attacks by Brandis on Gillian Triggs, President of the Human Rights Commission, seemed to border on misogyny, defamation, personal and pathological contempt.

His collaborator, then Prime Minister Tony Abbott was not only equally obsessed, but also el Capitan's hand was firmly on the tiller.

Party parrots like Immigration Minister Peter Dutton and Bronwyn Bishop were just some who squawked their approval.

Their brutal strategy to publicly harass Triggs into resigning and install in her place, fellow commissioner and Liberal Party lackey Tim Wilson imploded when Independent Australia revealed in an exclusive that Wilson had been lured from his position as policy director for the Institute for Public Affairs to join the Human Rights Commission with the promise he would get Gillian Triggs' job.

But hey, he did the human rights cause a favour when he duly resigned and – surprise, surprise! – was endorsed as the Liberal candidate for Andrew Robb's old seat, Goldstein, named for the extraordinary pacifist, suffragist and newspaper publisher/editor,Vida Goldstein. The extraordinary political activist and suffragist Vida Goldstein, in whose honour the seat of Goldstein was named (Image via gardendrum)

Brandis is also still furious with Dreyfus for taking him to Court to gain access to the Brandis diary entries for September 2013 to May 2014, to find out who met with the attorney-general in the lead up to funding cuts in Joe Hockey's 2014 Budget.

It was George Brandis' birthday this week. If only he would give Australia a birthday present and stand down.