Trying to survive on the Newstart allowance severely limits what a recipient can do, including looking for work, writes Aidan Jarvis.

Okay, technically, you can go to virtually the same places as employed people when you’re unemployed. But the horrifically low rate of Newstart forces thousands of Australians each year to stay confined in their own house all day.

Doing almost anything in this country costs money. Even free activities or destinations require you to spend money on travel, which for most people may be negligible but is actually a major strain on the leftover income of the unemployed.

The welfare payment that unemployed people receive – Newstart – is at a crippling low rate; lower than it ever has been before. At slightly under $550 per fortnight it may seem like a modest number to those who haven’t had to cope with surviving on the payment for any longer than a few payments, but it already – long ago, mind you – has been surpassed by the immense increases in the cost of living in Australia.

To put it into perspective, each year the Newstart payment is raised twice as an adjustment to inflation, as per its indexation. In March and September, the payment is raised by a few dollars. Ultimately, this means that each year Newstart increases by about $5 per fortnight, if we’re generous. The last intentional increase (not inflation adjustment) was in 1994.

Labor is considering a substantial increase to dole payments if it wins the next election.

Can taxpayers afford this? 🤔 pic.twitter.com/5iDDG7Ek0p

However, housing, electricity, gas, petrol, transport – literally every day-to-day expense – has increased throughout the past 25 years at a much more substantial rate. The housing market has risen over 60% and electricity prices have risen over 200%. The average rental cost in the northern suburbs (a high-unemployment area) of Adelaide sits at about $220 per week — well over 75% of the Newstart payment alone.

Revisiting travel expenses, Adelaide Metrocard concession costs have increased enough in the last year that if an unemployed person uses their Metrocard three times per week each week for the year (which should be expected to meet job search requirements), that $5 increase – plus more – is already spent on travel alone.

When rent alone is over three-quarters of an unemployed person's income, how are they expected to leave the house, let alone do anything when they do? How are they to afford nutritious food, to stay healthy and able to jump at the next opportunity to work? Well, typically, they don’t. The mounting costs of bills have pushed numerous people, whose only wrong in society is being unable to find employment, so low into poverty that they skip meals.

Having Australian citizens so poor they have to skip meals and stay confined to their house – similar to actual incarceration – is abhorrent. Australia has better standards than this.

And this, among many others, is a prime example of why Newstart should be raised. The isolation, the starvation, the overall poor health and the inability to engage in the exact obligations and activities one is required to do to receive the payment are dire issues that should no longer be politicised as a tool by existing or potential governments to gain voters.

Each Australian political party should face the facts — this payment is woefully low and immediately needs to be raised. Somehow, the ALP is incapable of admitting this. Labor, so far, have committed to reviewing the rate of Newstart but have not committed to lifting the payment.

For what reason? Are they scared to admit the fact that in our wealthy nation we tell people who cannot afford food that they must find a job before they are “allowed” to eat?

It appears there is something preventing Labor from addressing this, as their only official comments on the rate of Newstart is that they will “review the rate”.

But review what, exactly? The evidence is readily available: the community sector, the business sector, the local Councils (19 across Australia, representing 1.5 million people), trade unions, the think-tanks all know what no government will admit.

Labor has one last opportunity this year to make this right, at its upcoming national conference in Adelaide from 16-18 December. No more talk about “reviewing the rate” — it has been reviewed countless times over countless years. To review is wasting not only money but time as well. Each week that goes by is dozens of wasted days, hundreds of skipped meals, thousands of moments of hardship — all unnecessary.

Labor, if they win the 2019 Federal Election, need to raise Newstart as a matter of urgency and then conduct their review into all the ways that the welfare system harms recipients. No more waiting.

Aidan Jarvis is a student and an advocate for welfare recipients, via Anti-Poverty Network SA. 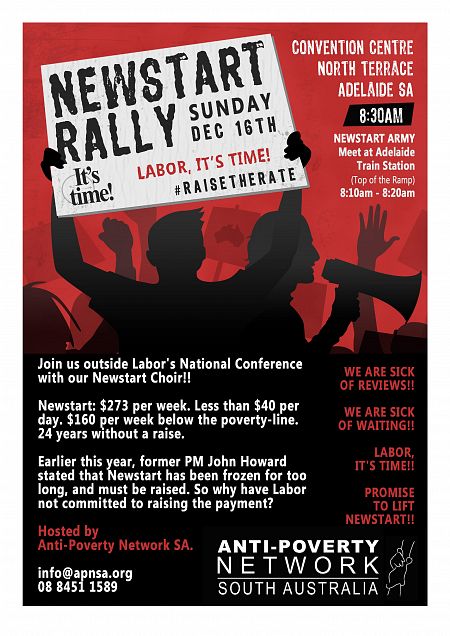 14 December 2018, 11:00am Trying to survive on the Newstart allowance severely limits what a recipient can ...
Join the conversation
comments powered by Disqus
News updates