The neoliberal hypocrisy over 'market forces'

While many people proclaim neoliberal ideals, no-one actually lives by them, because neoliberal ideology is hollow and hypocritical at its core, writes Tony Lewis.

This piece is written as an extension to Dr Geoff Davies’ excellent recent article 'Countering neoliberalism: A new life for Labor?' (IA, 10/3/14), as there is much more to say on this topic.

The truth is that while there are many people out there who proclaim the neoliberal ideals, there are very few ― if indeed any ― who actually live by them. Most people who proclaim these values are the first to turn against them in particular circumstances — those circumstances being quite simply the moment they feel themselves threatened by the real forces of the market.

Have you ever noticed the less well intellectually endowed politicians and commentators speak, almost in the same breath, of “deregulation” and “law and order”?

If so, you have witnessed the seeding of this neoliberal hypocrisy over market forces.

The less well intellectually endowed politicians and commentators deceive themselves with tricks of language and usually manage to entirely believe that they are speaking of different things. But they are not.

If they were in any way equipped to articulate their real position, the less well intellectually endowed politicians and commentators would understand that they are using the term “regulation” to refer to law they do not like, and they are using the term “law” to refer to regulation that they do like. But by separating the terms in vocabulary, they are able to sustain the fantasy that these are different things, and so they are able to continue to argue mutually opposing positions.

Let’s look at some examples of how they do this.

If the Abbott Government, for example, genuinely believed in market forces, then they would legalise the trades in heroin, guns and child pornography. After all, there are proven markets for these things.

They do not legalise these things because they do not see these factors as working in their own interests.

As an aside here, I do recognise that the neoliberals will willfully misconstrue the above argument as me advocating the relaxation of regulation on these issues. The neoliberals will do this as a diversion from the real issue — they would much rather attack the messenger rather than confront the uncomfortable reality of the message.

Watch them do it.

For the record, I state here unequivocally that I do not advocate the relaxation of regulation on these issues. I’m really very glad that we live in a regulated society and I fully support the regulation of these market forces — and others.

Returning to the main argument, perhaps the Abbott Government’s crowning glory in its tacit anti-neoliberalism is in its handling of the asylum seeker issue, particularly with respect to people smugglers.

Because the people smugglers operate outside Australia’s jurisdiction, Abbott cannot directly “regulate” them, so he goes to the next logical step — he compares the situation to warfare, and behaves as if he were really at war.

But he does not. And this clearly exposes the lie that is at the heart of the neoliberal ideology.

I’ll buy that. And the truth is that every neoliberal ideologue buys it too. Well actually, the real problem is that they only buy half of it.

The less well intellectually endowed politicians and commentators are generally either not intelligent enough to recognise the hypocrisy of their position, or not honest enough to acknowledge it.

The debate we should be having, therefore, is not about “whether or not” we should regulate — because even those who claim to champion deregulation will regulate when it’s in their interests to do so. In fact, it’s about how, when and why we regulate.

As Dr Davies says, this is not a matter of 'left versus right', it is a matter of truth and untruth, fact and fantasy. 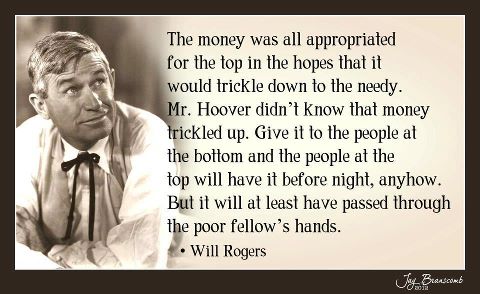 An open letter to #FakeTradie

The neoliberal hypocrisy over 'market forces'