As the Abbott Government reveals more disasters and incompetence daily, so Murdoch’s minions ramp up their efforts to conceal the spiralling crisis, writes Alan Austin.

THE ABBOTT GOVERNMENT is proving to be far more dysfunctional ‒ and Abbott himself vastly less capable ‒ than even the gloomiest pessimists expected.

Hence, Rupert Murdoch has been obliged to expand efforts to conceal the calamity he foisted upon Australia at the last election.

Writers paid to hide the truth about the Abbott Government include some who effectively distorted the record of the Rudd and Gillard administrations.

‘Nation better off under an economically astute Abbott’.

This was immediately arresting because of the prime minister’s legendary economic illiteracy.

It contained the bold assertion:

‘Abbott has a clear economic commitment and a very definite plan of action.’

Again, a great surprise after Abbott’s disastrous speech at Davos which, if he had a plan, would have been the place to reveal it.

So, what was the definite plan of action Fitzgerald alone has detected?

Sorry, Ross, that is not a plan. That’s a list of campaign slogans. Precisely the reason Abbott was such a failure at Davos.

A plan sets out a strategy in detail, showing how it achieves specific desired outcomes. It explains quantitatively how new policies will yield better results than the previous policies –which delivered the world’s strongest economy.

According to whom? How will this follow labour market deregulation, reducing government debt, promoting free trade, increasing competition and cutting regulations? Why has this not worked anywhere else?

Fitzgerald concludes with the banal:

‘The Coalition government has already made an auspicious start.’

Really? According to what data? None are referred to.

Admittedly it is early days, but several indicators show Australia’s economy worsening over the last five months, while the rest of the world is recovering.

Others employed by The Australian to gild the rotting lily in recent weeks include Maurice Newman, Gerard Henderson and Greg Sheridan.

In other outlets such as Sydney’s Daily Telegraph and Melbourne’s racist Herald Sun Andrew Bolt is on the job. He holds the record for more than 19 fabricated allegations against Aboriginal people – in two articles – according to Justice Mordy Bromberg.

Leading the team of Abbott disaster deniers appears to be Dennis Shanahan at The Australian. Shanahan is the man who holds the record for the most false assertions in a daily newspaper front page ‘scoop’.

In a March 2012 story, Shanahan sought to malign prime minister Julia Gillard with seven damaging allegations about her colleagues vetoing her appointment of Bob Carr as foreign minister. The falsehoods were all based on unattributed quotes — and all were exposed later that day.

Shanahan was assigned to cover Abbott’s trip to the World Economic Forum (WEF) at Davos, Switzerland, last week in the accurate anticipation that fair coverage would be highly negative.

As shown by Matthew N Donovan here yesterday, Shanahan sought to spin an abject failure into a triumph with what must be some of the most tortured political puffery outside North Korea in a generation.

‘The Prime Minister's keynote speech as the chairman of the world's premier economic forum prompted strong responses from national and business delegations at the conference last week.’

Absolute nonsense. The myriad reports from Davos reveal not a shred of evidence for this.

Reuters news agency covered the WEF with about 30 reporters and editors and filed more than 250 reports and updates. None indicated that Abbott had any impact whatsoever — just one brief perfunctory report noting his call for free trade.

Bloomberg business news agency filed more than 400 reports with interviews with all major participants on every possible topic. They not only ignored Abbott’s embarrassing speech but failed to even note his attendance.

Even Murdoch’s own Wall Street Journal in the US ran 172 Davos reports — not one mentions Abbott.

'Abbott has used his three-day flying visit to Switzerland to full effect on every level and left a positive impression with some of the most senior business people in the world as well as ‘opinion formers’, WEF directors and other world leaders.'

Wow. Great! So can you name a business leader, an opinion former, a WEF director or a world leader? Is there a direct quote?

‘Chief executives of foreign corporations were asking after some of Abbott's presentations if they ‘could have one of him’ in their country because of his clear and positive outlook.’

Which corporations? No appearance, your worship.

‘Japan's Prime Minister, Shinzo Abe … has also been impressed with Abbott and is looking forward to a close working relationship in the region and within the G20.’

Really? Who? Or is that an on water operational matter?

In fact, in a week of solid reporting on Davos amounting to several thousand words, Shanahan appears to have found only one person prepared to put his name to any comment about ‘the Australian agenda’: Abbott’s trade minister Andrew Robb.

To be fair, The Australian did run one story which said Labor thought Abbott’s Davos speech was “embarrassing”, but it seems Murdoch’s minions are hoping that just one accurate story will be lost in the fog of falsification.

With dismal prime ministerial performances continuing and opinion polls plummeting, but 31 months until the next election, Australians can expect more of this.

Unless, of course, with concerted effort, community cooperation and some luck, Murdoch’s manipulators can be marginalised, if not eliminated.

We live in hope.

Find out about the March in March: an independent national protest set for later this year, aimed at showing Australian’s lack of confidence in the Abbott Government’s policies. 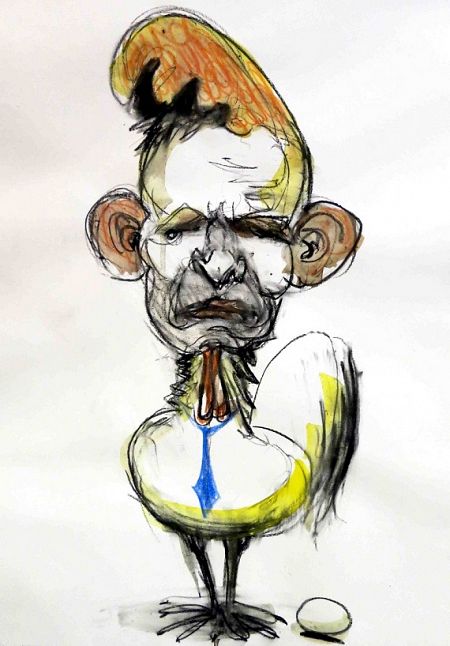