Murdoch and Abbott combine to silence the ABC

The Abbott Government is ramping up endeavours to reward its principal promoter Rupert Murdoch with greater media control.

Ministers are now openly attacking the Australian Broadcasting Corporation’s foreign television service. As usual, neither Murdoch’s nor the Coalition’s people are telling the truth.

Wow! Put on notice? By whom? Well, no-one with evidence for anything actually amiss. The support offered was only another unspecified whinge by Tony Abbott’s disgraced foreign minister Julie Bishop.

‘Bishop has expressed concerns that the ABC is not meeting the terms of its $223 million Australia Network contract.’

However, it offers no basis for this allegation from her or anyone else.

There are two direct Bishop quotes:

Firstly, that the previous Labor Government

‘… corrupted the tender process ... and prevented a competitive process from occurring [which] has resulted in ongoing concerns about the contract that was awarded to the ABC.’

‘I also have concerns about the quality of the programming and whether it is meeting the goal of promoting Australia's interests overseas. It is meant to be a tool of public diplomacy and I am concerned by the level of negative feedback I receive from overseas.’

What feedback? From whom?

The article then rehearses News Corp’s earlier bleatings, including that in November the ABC beat all other media to the punch by partnering new online journal The Guardian (Australia) to reveal that our intelligence agencies had monitored the phonecalls of Indonesia’s president and his immediate family.

Not surprisingly, The Guardian responded with a piece headed

This article put the foreign minister’s statement into the context of the increasingly shrill but empty attacks by Abbott supporters:

‘Her concerns … follow a series of complaints by conservative politicians and commentators about the ABC.’ 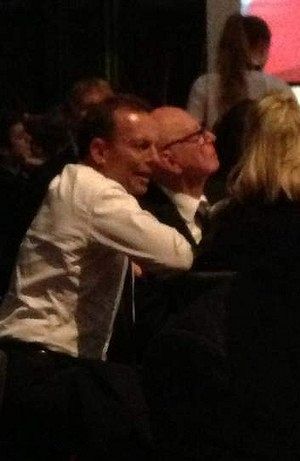 Both articles refer to the original ‒ somewhat controversial ‒ tender process used for awarding the lucrative Australia Network contract. This had been intended to decide between two alternatives — the ABC and the Murdoch-controlled Sky News Australia.

That Sky lost obviously still rankles within the Murdoch empire.

However, the expression of that bitterness by The Australian ignores two realities.

The first is that it is perfectly normal for governments to choose to put a contract to tender or not. There was nothing improper in the Gillard government deciding to use a tender process and then, when that was obviously corrupted by leaks not of the governments doing, to then abandon that process.

The second and more critical suppressed fact is the status of Sky News and its parent company at the time of the November 2011 decision.

A parliamentary report has since confirmed Rupert Murdoch is ‘not a fit person’ to lead a major corporation and that his son James Murdoch – then a director of BSkyB, which part owns Sky News Australia – showed “wilful ignorance” about criminal activity inside his company.

'... to cover up rather than seek out wrongdoing and discipline the perpetrators.'

'... recklessness in prioritising sensational stories, almost irrespective of the harm the stories may cause and the rights of those who would be affected.'

More than 100 people have now been arrested over Murdoch employees illegally gathering ‘news’. Of these, 26 have been formally charged with crimes.

In Australia, the Murdoch organisation had also been damned by a series of adverse findings in courts and other tribunals.

The Victorian Supreme Court condemned two senior Murdoch executives in 2010 for lying under oath to the court.

The Federal Court, in 2011, found The Herald Sun guilty of violating the Racial Discrimination Act when two articles included more than 19 falsehoods regarding Indigenous Australians.

A long list of adverse findings had been made by the Australian Press Council in the years leading up to the Australia Network decision.

In summary, the Australian Government made an eminently justifiable decision in 2011.

Had it awarded an important contract to proprietors clearly condemned as unfit it would have invited the dismay of governments, professional bodies and other observers across the globe. The outcry would have been deafening, damning and deserved.

The conduct of the Murdoch organisation since then has not improved. Rupert Murdoch has admitted he lied to the Leveson Inquiry and scoffed at its findings, despite pretending to accept its authority when he appeared in person:

Just since November 2011, the Press Council has made more than 27 further adverse adjudications against Murdoch newspapers in Australia for violations of the principles of fair reporting.

It’s no surprise that The Australian suppresses these salient facts, as it routinely does so many other inconvenient truths.

But The Guardian? Why did it not mention those aspects of the history? Perhaps young former Fairfax author Daniel Hurst was simply unaware of them. Let’s hope so.

Meanwhile, what of the ABC?

It should certainly expect more gratuitous attacks by conservative forces. That is a given.

But how will it respond?

With a stronger-than-ever commitment to integrity and independence? Or will it buckle under Coalition and Murdoch pressure?

The answer to that is not so clear.

We will watch with interest.

The originals of John Graham's art, featured in this piece as well as elsewhere on IA, are available for purchase by contacting managing editor David Donovan at editor@independentaustralia.net.