With ten days to go until Australia votes, the mainstream media chorus, led by Murdoch’s full falsetto and complete with backup singers, is in optimum vocal ensemble mode.

Suffice to say, if Labor manages to wrench power from this off-key Morrison Government rabble, no one will be able to accuse the Fourth Estate of not trying its damnedest to avoid it. 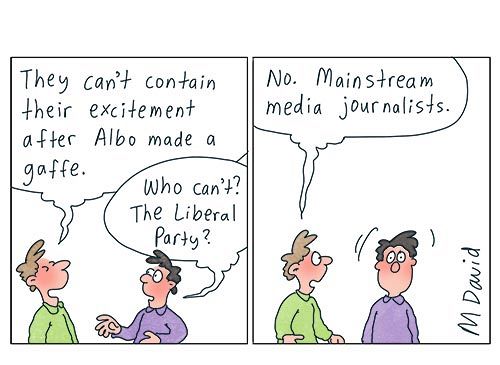 It may be reasonable to assume that the impact of constant media attacks will be lessened with the current public disenchantment in News Corp outlets — if it was only News Corp. Sadly, it is not.

While the Murdoch machine is certainly doing its part – today’s tally of anti-Labor scare campaigns as noted by former PM Kevin Rudd including on ‘electric vehicles, clean energy, teacher training [and] ‘hospital funding’ — the rot, as we have mentioned before, has spread far beyond Sky After Dark and Herald Sun hysteria.

Across the Nine media platforms, there is a steady if not quite as blatant pro-Coalition cacophony. This morning, to take but one recent example, featured AFR political editor Phil Coorey labelling Labor’s proposed 5.1 per cent minimum pay rise as:

'...a one-way ticket to the Weimar republic.'

Perhaps someone should give Mr Coorey a history lesson since it was the Weimar Republic's decision to print money in order to pay its Treaty of Versailles war reparations debt – not wage rises for the lowest paid – that created Germany's hyper-inflation during that regime.

Wage growth has been stagnant under the Coalition since 2013, while corporate profits have boomed — it is this that has caused inflation.

Meanwhile, back at the national broadcaster, Lisa Millar was referring to the same proposed wage correction for Australia's lowest-paid workers as a ‘5.1 per cent wage breakout’  and expressing her surprise that Albanese would campaign with Premier Dan Andrews, whom she described as "on the nose" — despite the latest poll showing Andrews leading Matthew Guy by 17 percentage points as preferred leader.

And then there was the ABC's Jane Norman moderating at the National Press Club where a stammering, blathering Barnaby Joyce, bleeding from the nose – no, really – was given free rein.

Asked whether the Liberal/Nationals Coalition was made vulnerable over climate change, Joyce regaled us all with the following:

Because what we are doing is … we have got to make sure our nation earns as much money as possible. We can’t do that if we shut down coal exports.

“I know you are going to get 1001 photos of me with a Kleenex up my nose, congratulations.”

But the establishment media turn a blind eye to Barnaby's litany of failures.

And the onslaught of ill-informed and aggressively posed questions towards Anthony Albanese across all areas of the media landscape is contrasted daily with Morrison’s free pass. The PM declines to answer questions, changes the subject, walks away from media conferences and, in the case of the ABC, simply refuses to turn up at all. 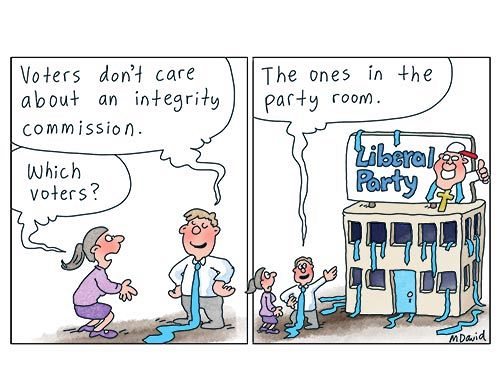 With Morrison currently submerged in a seemingly bottomless sea of corruption allegations and with serious questions over his Government's handling of the economy, the news continues to be filled with tiresome repetitions of Albanese's gaffes, while Morrison's complete incompetence, if not blatant corruption, is consistently allowed to go unquestioned.

And this week, in what must surely win the most farcical failed attempt to trap the Opposition Leader, Channel 7's Jennifer Bechwati asked Anthony Albanese what he thought about a tweet from a Labor politician posted, wait for it, 11 years ago!

Only it’s not just the obvious bias, though there's plenty of that, there’s the underhanded slow yet persistent creep of complete falsehoods. Nine’s 60 Minutes hosting of the leader’s debate, absurdly named "The Great Debate”, was simply abysmal.

It was poorly run. It was blatantly biased. People were yelling over each other, interrupted only by strategically placed Liberal Party advertisements. It wasn’t a debate, it was a debacle. And the only thing that was great about it was the point at which it was over.

People who endured the show till the bitter end also reported being unable to choose Albanese on Nine’s viewer voting platform.

These things were perhaps to be expected, of course, since this privately-owned broadcaster, which also now operates the former-Fairfax papers, is run by ex-Howard Liberal Government Treasurer Peter Costello.

But the part that stands out, the point at which bias crossed over to complete manipulation of the facts happened when, despite Albanese being the clear winner, in an Orwellian manoeuvre quicker than a blink of an eye, the result was simply swapped around. Where the figures were showing an Albanese win by four percentage points, Morrison’s name was seamlessly substituted, declaring the PM as the winner of the debate where the Labor Leader’s name previously appeared. If you think we are imagining things – as we very much hoped we were – you can view the footage here.

Our media landscape is cooked. Only a complete change of government followed by a Federal ICAC and a royal commission into Murdoch and co can possibly fix our Fourth Estate.

Watch till the end