Last weekend's Morgan Poll, the third since Kevin Rudd became Prime Minister, shows another significant swing to the ALP. ALP is at 54.5% – up 3% since the previous week’s multi-mode Morgan Poll – ahead of the L-NP 45.5% (down 3%) on a two-party preferred basis. 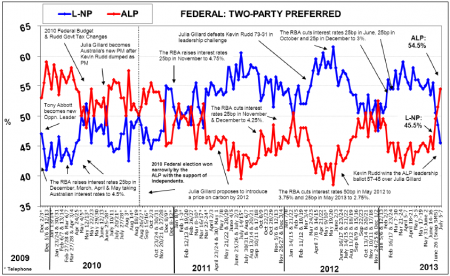 Among the minor parties, Greens support is 8.5% (unchanged) and support for Independents/ Others is 10.5% (down 1%). Within others, support for Katter’s Australian Party is 1.5% and support for the Palmer United Party of 1.5%. 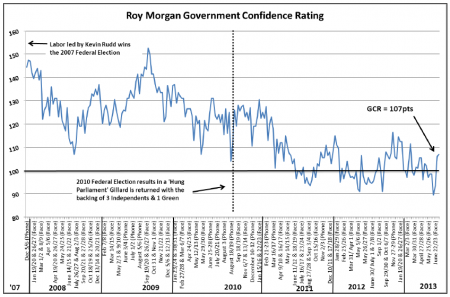 Methodology: This multi-mode Morgan Poll on Federal voting intention was conducted over the last few days via Face-to-Face, Internet and SMS interviewing, July 5-7, 2013 with an Australia-wide cross-section of 3,521 Australian electors aged 18+, of all electors surveyed 1.0% (down 0.5%) did not name a party. Electors were asked: “If an election for the House of Representatives were held today — which party would receive your first preference?” For more information on this poll see the Roy Morgan website.