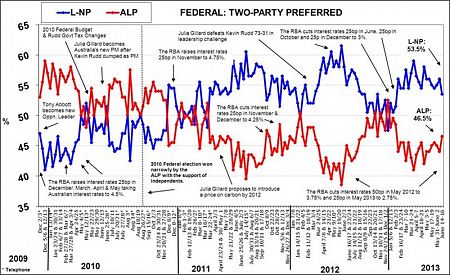 Pollster Gary Morgan suggested the reason why the poll differed sharply from the Neilsen poll released last night ‒ which showed a 47% - 53% result in favour of the L-NP ‒ was that Neilsen polled before the full impact of the Howard Sattler interview with Julia Gillard and his subsequent sacking was known.

Today’s Morgan Poll shows the ALP closing the gap on the L-NP with the L-NP (53.5%, down 2.5% in a week) cf. ALP (46.5%, up 2.5%) after Perth radio host Howard Sattler interviewed Prime Minister Julia Gillard last Thursday and questioned the Prime Minister about her partner’s sexuality. Sattler was subsequently sacked on Friday afternoon by Fairfax Radio and the Morgan Poll which was interviewed after this point shows a clear swing back to the Government.

(This multi-mode Morgan Poll on Federal voting intention was conducted over the last few days via Face-to-Face, Internet and SMS interviewing, 14-16 June 2013, with an Australia-wide cross-section of 3,323 Australian electors aged 18+. Of all electors surveyed, a low 1.0% (down 0.5%) did not name a party. Read the full details of the poll on the Roy Morgan Research website.)