A special snap SMS Morgan Poll of 2,530 Australian electors after last night’s ALP leadership ballot showed a large swing to the ALP 49.5% (up 5%) since last weekend’s multi-mode Morgan Poll, now just behind the L-NP 50.5% (down 5%) on a two-party preferred basis after former Prime Minister Kevin Rudd was returned to the leadership of the ALP. 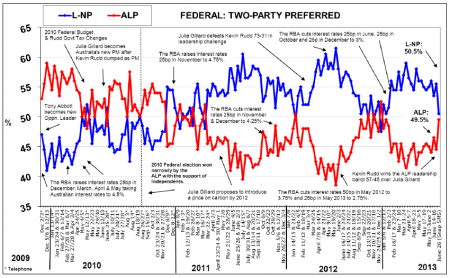 If a Federal Election were held today, the result would be too close to call according to tonight’s special snap SMS Morgan Poll on Federal voting intention with an Australia-wide cross-section of 2,530 Australian electors aged 18+.

(This special snap SMS Morgan Poll on Federal voting intention was conducted last night via SMS, interviewing after the result of the ALP leadership ballot was announced, 8pm 26 June 2013 with an Australia-wide cross-section of 2,530 Australian electors aged 18+. Of all electors surveyed a low 0.5% did not name a party. Read the full results on the Roy Morgan website.)