Rowan Ramsey gave a speech in the Australian Parliament in mid-February 2012, which was biased against wind power. In this speech he made a number of claims and inferences that were questionable at best and false at worst.

Rowan claims that he is very concerned with the high level of wind power in SA destabilising the grid. Isn't it curious that an opposition back-bench member of Parliament should be more concerned about the stability of the state power grid than with economic development in his own electorate? (I live in the same region as Rowan's electorate and as far as I can tell the power grid is quite stable.)

He implied that wind farms caused ill-health. There is no scientifically acceptable evidence that wind turbines cause sickness.

He questioned the sustainability of the wind farms in Grey. The implication here is that he believes the fossil-fuelled power stations in Grey are more sustainable than the sustainable energy installations! What sort of Orwellian double-think is this? There is no evidence at all that wind power is unsustainable; if it was we would see abandonment of wind power somewhere in the world — we are not seeing this in any country. I believe that wind energy is the fastest growing form of electricity generation world-wide; certainly it is the fastest growing form of sustainable energy.

He all but said that wind power is unreliable; this is quite false, wind turbines have a reliability of around 99%. What he might have meant was that the wind is variable and wind power is available only when the wind blows. Of course this neglects the fact that the wind is predictable and therefore the amount of electricity generated by any wind farm will also be predictable.

The graph below shows the generation from wind power in South Australia on 25th February 2012, the day before I wrote this. Quite obviously the electricity being supplied by the wind farms varies only very slowly — where is the unreliability in this sort of power production? 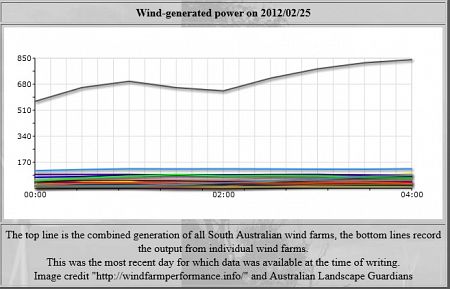 On the other hand, Rowan talked of coal or gas as 100 per cent reliable sources of power. He might be surprised to learn that their availability, due to shut downs for maintenance or breakdown, is actually around 85%.

Rowan implied that wind power produces power spikes, without any evidence to support of his claim. In fact there are strict operating requirements that any generator must meet in order to avoid unacceptable voltage rises. Indeed, I believe in SA there are particularly stringent requirements that only apply to wind farms. Also, do you see evidence of power spikes in the graph?

I believe he confused base-load with peaking power supplies. In my understanding, base-load power is inflexible and unable to 'fill in the gaps' in the power supply. The inflexibility of base-load power, mostly supplied by coal-fired power stations in SA, is almost as much a problem in fitting supply to the changing demand as is the variability of wind power. The flexible power, available on demand, is mostly supplied by gas generators in SA.

Rowan talked about 'long-term threats to agriculture' and mentioned problems with aerial spraying as one of the implications of wind farm development. He did not give any evidence that there were any real threats to agriculture. (So far as I have been able to find out, no aircraft anywhere in the world has ever crashed due to turbulence from wind turbines, or for that matter, collision with a wind turbine.)

Rowan talked about destabilization of the grid due to wind power, but did not give any evidence that there had been any. More than 20% of SA's power comes from wind farms and so far as I can tell, the power grid is as stable and reliable as it ever has been; the Australian Energy Market Operator (AEMO) and Electranet seem to have no complaints. SA's power supply is linked to the eastern states and the whole system is controlled by AEMO. The total installed wind generation capacity in this grid is 3.9%. For comparison, the grid controlled by 50 Hertz Transmission GmbH in Germany has 30.6% installed wind power and the Energinet grid in Denmark has 28.6%.

Rowan was correct in stating that not all of the wind power projects proposed in SA could be built without major changes to the electricity supply infrastructure — especially far more interconnection to the eastern states. (For every wind farm built in Australia, five have been proposed. No one expects all the proposed wind farms to be built.)

Rowan talked about the Ceres Project proposed for Yorke Peninsula and said that the announcement of this was very good. He then went on and linked it with forcing the closing down of "the coal fired power stations at Port Augusta and probably much of the capacity of the gas generation at Torrens Island". It would be wonderful if the Thomas Playford coal-fired power station at Port Augusta could be closed down — it is the dirtiest in Australia in terms of carbon dioxide emitted relative to power generated. Does Rowan see the closing down of the dirtiest power station in Australia as a bad thing?

Finally Rowan urged "the South Australian government and the promoters of these wind farms to be honest with the electorate". I would urge the same of Rowan Ramsey!

I have no doubt that the rise of renewable energy, wind power in particular, is causing problems to the fossil fuel fired power stations. The companies who run the latter do not like having to cut their generation (and profits) to make room on the grid for wind power. It is these same power stations that are among the biggest greenhouse gas polluters in Australia.

Is Rowan looking after the interests of his constituents, or of the fossil fuel industry? He is correct, as I understand it, in pointing out that there are times when the generated wind power loads the SA grid to its limit, and that there will be a need for more interconnection between SA and the eastern states if wind power is to expand much further. However, the Liberal Party's systematic attacks on sustainable energy and support for the fossil fuel industry in its campaign to stop the rise in sustainable energy shows a complete abandonment of ethical standards.


What Rowan neglected to mention

Rowan said: "There are considerable spin-offs for local employment opportunities, and I am pleased with the investment". (This was one of very few sentences in his speech that was positive toward the wind industry.)

There are far more spin-offs to the local communities than just the direct jobs.

Rowan suggested that wind turbines cause health problems, in spite of the lack of any scientifically acceptable evidence for this, but neglected to mention the very real health problems caused by the toxic substances released by the burning of coal.

Unsurprisingly, Rowan did not mention ethics. Sustainable energy is much more ethical than is fossil fuel energy for a number of reasons.

(This story was originally published on Dave Clarke’s blog ‘The ramblings of a bush philosopher’ on 26 February 2012 and has been republished with permission.)