Mirabella vs McGowan in Indi: The battle for Kelly country

One of the most closely watched seats at this Federal election is Indi in country Victoria, where the Liberal's Sophie Mirabella takes on outstanding Independent candidate Cathy McGowan, who speaks here to David Looker. 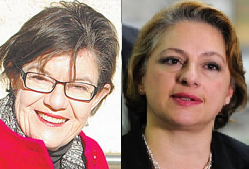 INDEPENDENT AUSTRALIA has a philosophy of supporting Independents in the interests of parliamentary democracy  and so it has been paying close attention to the rural Victorian seat of Indi at this Federal election.

This is Ned Kelly country and a highly regarded local Independent Cathy McGowan may heist the Electorate next week. Many from all sides are hoping so and Ned would surely approve of her battle against the mainstream party forces  represented by the controversial Liberal front bencher Sophie Mirabella.

Indi is a Federation Electorate, meaning it has been there from the start. It covers 28,000 square kilometres which includes Murray river towns. In fact 'Indi', is an Indigenous name for the Murray River. Indi includes the Victorian towns of Wangaratta, Benalla and Mansfield and all the "Kelly country" towns like Beechworth and Euroa. It is spectacularly beautiful − especially in the Alpine areas − and one of the most scenic areas of Australia. You can snow ski in Indi.

Barry Everingham has previously written about the contest between current Member Sophie Mirabella and Cathy McGowan in IA.

In the last Parliament, the Independents gained a reputation for integrity and common sense. That was probably most typified by the patrician manner of Tony Windsor, who won national admiration from the average voter for his measured no-nonsense view.

It was therefore a surprise to many that, when asked by Barrie Cassidy on the ABC's Insiders program who he would "miss the least" in Canberra. Windsor specifically nominated Sophie Mirabella the Member for Indi. In fact, he said "she wins the nasty prize" and offered to go and campaign against her "for the excellent local candidate" running against her as an Independent in Indi. He was, of course, talking about Independent Cathy McGowan, AO.

"See how much better you could do for yourselves," he said to the people of Indi.

Well it seems he is not alone in thinking that as there is a swing emerging in the electorate of Indi. It is a tough challenge and betting markets a week before the election quote the Coalition at $1.25, the ALP at $23 and "any other", which is, really, McGowan at $3.65.

This might be a good bet, as IA found in conversation with Mansfield Mayor Russell Bate — who was prepared to comment, unlike the Mayor of Wangaratta.

Bate said that Mirabella is regarded by many as a


"...very intelligent and  very determined woman, but equally a very inflexible and at times an extreme woman."

Bate is also Chairman of the Country Alliance, so one might say he has a vested interest in opposing Mirabella — except for the fact County Alliance is not running a candidate in Indi. Mayor Bate felt there was a strong community feeling in the Electorate a change was needed and that many of those who feel Mirabella is "extreme" come from "the traditional supporters of the (Liberal) Party". The Electoral Commission figures show that since, she was elected in 2001, Mirabella's margin has gradually eroded though up until now she was still regarded as "safe".

Bate's comments have been born out this weekend by 44 prominent personalities in the region supporting McGowan with full page advertisements in regional newspapers. According to the local Border Mail, just one week before the election, Ken Jasper, a National Party identity, is one of the 44 who have "come out" and publicly supported her.

Cathy McGowan AO has a  conservative rural background in keeping with the traditions of the seat where 'Black Jack' Sir John McEwen was once member. In the 1980s, Cathy worked for the Liberal Member for Indi, Ewen Cameron. but she has worked hard in Community services and is a past President of Australian Women in Agriculture.

Cathy was awarded the Order Of Australia, has a National Centenary Medal and won a Churchill Scholarship. It is fair to observe that she does indeed share a lot in common with the traditional Liberal Country Party  base and her appeal to that constituency will be an issue for Mirabella on election day.

But McGowan has credibility as an Independent.

As her website and a comprehensive interview with IA reported below shows, she has socially liberal views issues as diverse as climate change believer, strong supporter of the NBN and gay marriage.

IA found Cathy McGowan accessible and forthright in her views this week when it sought an interview; the following is an abbreviated summary of  some of the main issues discussed in a wide ranging interview:

INDEPENDENT AUSTRALIA: Indi is traditionally a conservative electorate and I note you once worked for the Liberal party. Do you see yourself continuing that conservative  tradition?

CATHY MCGOWAN: I am standing as an Independent not bound to any party or ideology. As I go round talking to people and look for issues important to them, I find they are not attached to party political positions but are concerned with very practical issues like fixing up the trains, black spots in the phone network, poor broadband, health funding and mental health, education of young people and forming a long term vision for THIS electorate.

They all "get it" ...because what has happened in this electorate is people are disillusioned, disengaged and disenchanted by what has been happening in Canberra, where everything has been polarised between two political parties that are largely Melbourne and Sydney based and pay little attention to the problems of rural and regional Australia. So people are saying "that's great ... she is going to work with us as a rural community and do what we need to do". The people of Indi actually get it that  their Member should be a servant of their community and not play politics for the sake of politics.

IA: So I assume from that you do not think the current member Sophie Mirabella has achieved that?

CM: Well, I will know next Saturday the answer to that one.

IA: But you wouldn't be expressing these views if you thought she had done a good job, would you?

IA: I was as astounded as most when the Tony Windsor named Sophie Mirabella on Insiders as someone he would not miss and gave her "the nasty prize". Do you think Sophie's personality is an issue?

CM: I am not commenting on the current member at all. I am focussing on the issues in my campaign and the whole sense of disenfranchisement. And that is not just here. I speak to people across the board and many in other electorates say they wish they had someone like me running. It's much greater than Indi what is happening here.

IA: Lets touch on some issues. Paid Parental Leave is an issue in the campaign and one has the impression the view of it may be different in the country than in the city. How do you see it?

CM: I am not is a position to compare, but at a constituents meeting, 80 per cent raised their hands in favour but asked me to pay close attention to the detail ... how it is negotiated, funded and how it actually works. There are questions of how it would roll out. I am a past President Australian Women in Agriculture and there are particular concerns from women as to how it would work ... not for the first child but second and third. Childcare is an issue. So the technical detail has to be negotiated.

IA: Another issue that has emerged is foreign ownership of farmland. One of the previous members for Indi was Sir John McEwen and he was a famous protectionist. How do you see this issue?

CM: He was. I am not a protectionist. I am committed to free trade. I am also a member of the Victorian Farmers Federation and have been involved nationally. We need foreign investment and it is important to Australia. We particularly need investment in agricultural rural research and development and the Coalition has offered a paltry $100 million over four years, compared to the $5 billion on paid parental leave. I am not against that, but it is question of priorities and research in Agriculture is vital to our future.

IA: Any connection with climate issues... in that, is it possible regional centres could be centres for higher tech energy related industries if you get the NBN, which I note you support on your website?

CM: Regional manufacturing is important and the whole idea of innovation and industry is on a  lot of peoples' agendas. Up the valleys where there is wind, sun and water there is huge interest in energy and how we might manufacture it and use it locally.

CM: I will wait and see what legislation comes up in the new Parliament and which party is returned. But I think the Science is in on Climate Change. I believe it is real. I believe we need to use the markets to do what they do, but then my position will depend on the detail in  legislation comes up. Clearly both parties are moving their positions. There has been talk Abbott will make a double dissolution out of it. I have been telling people my position is we will work our way through this as we need to.

IA: Boat people. Do you think boats CAN be towed back to Indonesia?

CM: My position on asylum seekers is we HAVE to do better. I don't want to enter into arguments that we should do this or that. The political football on this makes me really embarrassed as an Australian. We need to take it out of the political place where it is now. Everybody is concerned about it. We need to take account of  our international obligations and recognise  we live in a region where this is an important issue. We have important relationships with our neighbours. People in Australia  care about this. I have been a Member of Rural Australians for Refugees and I really care about the personal and  political way we manage this I will be doing my best to get a bipartisan  solution and take it out of the political agenda.

CM: Neither. I am standing as an Independent because none of the parties represent the issues that are important to me as a resident and a voter in the Electorate of Indi. I believe I am totally and utterly independent. I am independent of the political parties and I want to work with the Government of the day because I want to make sure the issues of importance to the people of Indi are heard in their purity without being diluted by party or other ideologies.

IA: In regard to working with the Government of the day, Tony Abbott looks like becoming prime minister, but he might have been Prime Minister for the last three years had he been able to more effectively negotiate with the Independents. Do you think you will be able to work with Tony Abbott given he is saying he doesn't believe in Independents?

CM: I believe Tony Abbott is a gentleman and a real politician and that he will come and talk to me and give me the respect I am due. I am a skilled and experienced negotiator and will represent the people of Indi very well. I don't think personal and party politics will stop me being a good representative for Indi.

IA: So you think he will listen  to you in regard to matters important to Indi?