The mainstream media has made progress difficult for Labor in its biased favouritism towards Liberal Party policies, writes Dr Victoria Fielding.

THE MOST SAVAGE form of media inequality in Australian political reporting is the tired trope that the Labor Party are bad economic managers.

Like all such tropes, its foundation is not only mythical, not backed up by facts, but rather underpinned by deeply held ideological assumptions by journalists that fan the flames of similar assumptions amongst voters.

This media inequality – a form of structural media bias – leads the Labor Party to be framed as economically illiterate and a danger to economic growth every time they suggest even spending a cent. At the same time, the Liberal Party can spend as much as they like and that spending is characterised as good for the economy.

This bias was on full display this week when Labor leader Anthony Albanese made a smart proposal to incentivise vaccinations with $300 payments for every person vaccinated. This would not only speed up the vaccine stroll-out, but would also simultaneously stimulate the economy.

Yet, predictably, most mainstream journalists responded to this proposal not with objective analysis, not with democratically valuable reporting of the facts, but instead fell straight back into their usual biased representation of everything Labor does as a cost the economy cannot bear.

A perfect example of this bias came from Phillip Coorey, political editor at the Australian Financial Review:

‘Fairly or otherwise, Labor still suffers from the perception of being the weaker economic manager.

To turn around now and propose an audacious policy in which everyone gets $300 for having a vaccine risks reigniting concerns about the party's economic management record, real or imagined — and, more seriously, concerns about how Labor will govern going forward.’

Note how Coorey refers to this mysterious bias against Labor’s economic credentials as a “thing” that just so happens to be “out there” – fairly or otherwise, real or imagined – behaving for all the world like he and his media colleagues just happened across this bias as innocent bystanders.

To be fair to Coorey, he didn’t invent this structural bias. It’s structural and it’s historic. He just drank the Kool-Aid on it and perpetuates it unthinkingly, while claiming to be reporting the reality he is actively crafting for the audience.

I have been pointing out this blatant media bias, this obvious double standard, this clear media disadvantage for Labor politicians, for as long as I’ve been commentating. We all see the bias. We all feel the sense of injustice that Labor can’t propose any policy without being accused of being economic wreckers. Yet, the Liberals get away Scott-Morrison-free overspending JobKeeper by billions on companies like Harvey Norman who pocketed $22 million in taxpayer funds despite earning $462 million profit during the pandemic.

This bias is blatant hypocrisy. It represents different media rules for different parties. It lets the Morrison Government get away with everything. It obscures factual reality. Remember when Labor avoided recession during the Global Financial Crisis and got no credit, and instead was framed as “wasteful” with the stimulus package? 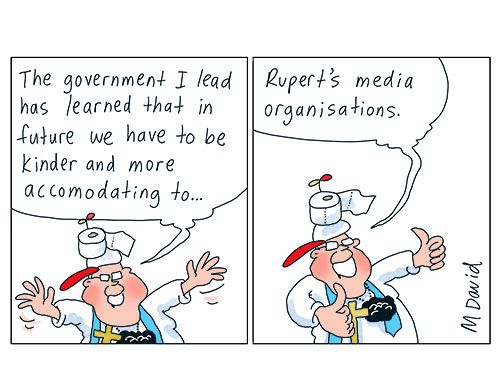 It makes it difficult for Labor to communicate with voters through a biased media frame. It is bad for democracy. It is a blight on equality. It is unfairness at its most basic level. We all have a right to be absolutely fed up with it. But why does it happen?

This structural bias comes from ideological assumptions about the legitimacy of groups with different power. Analysing industrial reporting from the 1891 Shearers’ Strike to the 2016 Country Fire Authority dispute, I found workers and unions – the class interests who formed the Labor Party – have always been accused of being the villain in industrial campaigns, because collective action was seen as a drag on economic interests.

Workers are framed as insubordinate, as economically reckless and as working against the national interest when they challenge the power of their employer to unilaterally dictate their working conditions.

This bias works the other way, too. In industrial reporting, the arguments of the employer are assumed to be entirely legitimate. In a nutshell, whatever the employer – the capitalists – think is good for the economy, is assumed by journalists to be legitimate and good for the national interest. This is where the “wealth will trickle down” myth comes from. Where unions are framed as “sectional” interests, the hero-worship of employers gives them a free pass to do whatever they want; they are automatically applauded as working for the public good.

This ideological bias underpins journalists’ reporting of the Labor Party – formed from the trade union movement and the Liberal Party – established to counter the labour movement as a voice for capitalist power. The same bias found in the 1890s still exists today.

That’s why when the Liberals spend money, even when they blatantly waste it, they are not accused of economic harm, yet when Labor proposes strong economic policies – or any policies whatsoever – they are framed as harming the economic and national interest.

How many times did we hear Labor in the last election have to justify the “cost” of their climate change policy on the economy? Of course, any smart economist knows that climate action is good for the economy — if the planet dies, the economy dies, too.

The same bias exists in media critiques of COVID-19 lockdowns, framed in Labor states as an economic disaster, even when they have been shown by economists to be far preferable to living with the virus. At the same time, Morrison and NSW Premier Gladys Berejiklian’s anti-lockdown stance was accepted as economically responsible, backed up by hero-worshipped café owners on ABC’s 7.30.

Ideological assumptions are at the heart of all bias. Journalists are not objective bystanders, but indeed have huge power to perpetuate these biases amongst the voting public.

This bias results in Labor politicians having to justify their policies with one hand tied behind their backs, on an uneven media playing field. If you feel it is just not fair, you’re right. It isn’t. Media inequality contributes to inequality of power, wealth and opportunity; the sense of injustice felt by the audience is absolutely a legitimate complaint.