Margaret Court in the act: The tennis racket is full of lesbians!

The world is teeming with lesbians, writes contributing editor-at-large Tess Lawrence and, as Margaret Court says, they all want to turn our kids into Communist Nazis — the very worst Nazis of all!

MARGARET COURT IS RIGHT, tennis is full of lesbians and she should know.

And that's not the half of it. The hairy gits are everywhere.

God's a lesbian. Jesus too. And why do you think the Ghost was Holy? Yep, a lesbian trifecta.

The AFL is dead set full of lezzos. Crikey, they've even got more of them than the AFLW!

Soccer is full of them, just check out the ink.

Everyone sucks up to them.

Lesbos, the island founded by lesbians is still inhabited by them and all the refugees there are lesbians too.

When you realise that some in the crowd might be lesbian devil-worshippers full of Satan's lust. #LGBT #MargaretCourt pic.twitter.com/TBmMwFazxL

Why not? It's obvious. Look around you, people. In Myer, at the tram stop, in the milk bar, at the dentist, what do you see? Exactly! All chokkers full of lesbians.

The Coalition is full of lesbians. And those that aren't are closet lesbians, that's for sure.

One Nation is full of lesbians, named for the one true sect.

The Labor Party is full of wannabe lesbians, but they're in with a chance.

The Reverend Dr Court, founder of Margaret Court Industries Inc, is also quite right to boycott Qantas for its corporate stance on same sex marriage. After all, girlcott sounds a bit silly even if it is closer to the mark. No wonder it's nicknamed Qantarse.

As well as writing letters to editors, she's thankfully outed the Devil's role in all of this — and linked such lust to Hitler and Communism.

Put on some non-lesbian organ music if you can find some, make a cuppa and listen to this beaut, penetrating and insightful radio interview on Vision Christian Radio with Maggie that really gives us an insight into the tennis great's humanity and compassion:

LISTEN TO THIS PODCAST HERE.

The 62 Grand Slam, thank you ma'am, heads up the Victory Life Centre and I was pleased to see good old Luke helping her out with a bit of fundraising advice to us all, tithes and offerings to you:

‘Give and shall be given to you, good measure, pressed down, shaken togehter and running over, will be put into your bosom. For with the same measure that you use, it will be measured back to you.’ (Luke 6:38)

Never mind the typo, heavens above, even the President of the United States does those. It shows we're human. I do them a lot, just so I can appear extra human.

(Actually, I can now reveal that "covfefe" spells "lesbian" sideways.)

Who can figure out the true meaning of "covfefe" ??? Enjoy!

By the way, funny that Luke should mention bosoms, but — given that he didn't much like women, even though he was a lesbian himself. As were all the Apostles, including that Mary Magdalene who tried to disguise it by going around washing mens' feet and drying them with her hair. Anyhow, off topic.

Billy Hughes was a lesbian. Sir Robert Menzies was a very tall lesbian and started the unplucked feral eyebrows craze emulated by the likes of Cara Delevingne.

The Mountbattens, Lord and Lady, were both lesbians.

Captain Cook was a seafaring lesbian. Burke and Wills were landlocked lesbians.

Cleopatra, Julius Caesar and Markus Antonius were all lesbians and so was that Walt Disney of Elizabethan times, William Shakespeare.

Did you know that all roses are lesbians? Didn't think so. The plant world is full of them.

All jockeys are too, I bet you didn't realise that either.

Elizabeth I was a lesbian and had two lesbian spaniels called Sappho and Boy George.

Sappho was named for the lesbian poet, but how's this, she was also a tennis player and this picture proves it: 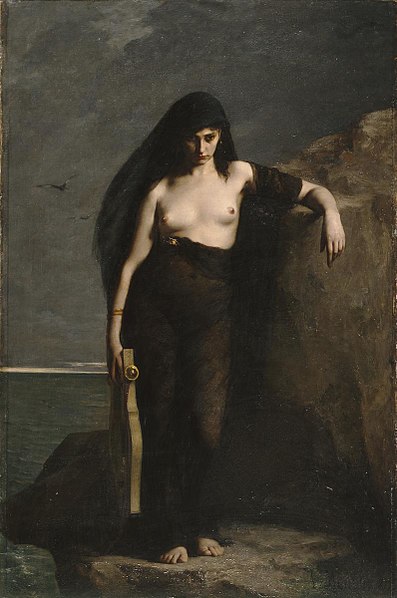 Yes, you've spotted it – what is Sappho holding in her left hand in this lovely picture in the Manchester Art Gallery by artist Charles Auguste Mengin – why, an early version of the tennis raquet, no less (Image Wikipedia Commons)

The world is full of them.

Sorry folks I've just been informed Margaret Court has Godwinned us I think that means she wins: https://t.co/QOoQCLbTRf pic.twitter.com/8HEByDdGjC

Get your serve in. Subscribe to IA today for just $5.