While the Morrison Government has done more than enough to lose the upcoming election, Paul Begley asks if Labor has done enough to deserve a win.

WHEN THE BUSINESS END of elections looms and things begin to look dire, contemporary political strategists turn their eye to the movement of polls and axioms as their ancient predecessors once looked for meaning in the behaviour of birds.

His multiple misdeeds catching up with him, a gloomy Macbeth observed to his partner in crime: “Light thickens. And the crow makes wing to the rooky wood.” The words are portentous but they don’t portend resignation or imminent defeat so much as a reckless determination to disregard boundaries and push on for the prize.

In that, the ruthless Scot is not unlike Australia’s Prime Minister Scott Morrison, who must face an election in the next six months. Rather than focus on the reality of thickening light at the end of a bad day, the Prime Minister talks incessantly of the coming dawn. 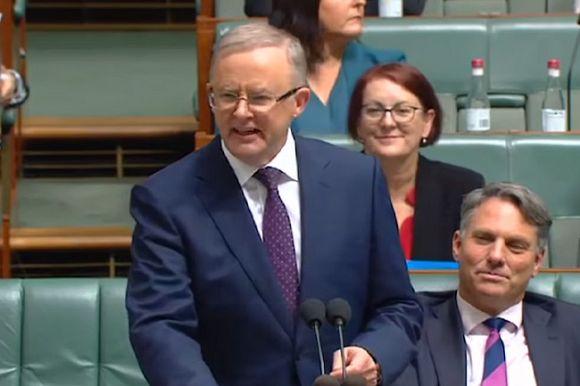 Since elected in May 2019, the Scott Morrison Government has lurched from successive misadventures that now make an unhappy list.

That list does not touch on potential corruption questions around the misallocation of around $760 million of grants to sporting organisations and car park projects, nor does it touch on Auditor-General questions about why land linked to the Western Sydney Airport development was purchased for $30 million when it was valued at $3 million, or water rights on land without water that the Government purchased for $80 million from an agribusiness company connected to the family of Energy Minister Angus Taylor.

Nor does it touch on money missing from the expenditure records paid to the three companies overseeing asylum seekers on the island of Nauru. Receipts show they were paid around $1.3 billion from 2017-21 but Senate Estimates has been told the total expenditure over the period was in the magnitude of $1.7 billion, with $400 million unexplained. Who received that money? Senator Kristina Keneally has made the point that it should not be regarded as “petty cash”.

Putting these matters aside, in the spirit of the promised dawn, Mr Morrison swept into Victoria in the wake of a three-month lockdown. He was filmed by obliging journalists getting his hair cut, making gnocchi at an Italian restaurant, sitting happily behind the wheel of an electric car and hitting election campaign buttons that suggest he is the agent of fun and freedom that Victorians have been denied by Labor Premier Daniel Andrews.

Tagged each day in the mass-circulation Herald Sun newspaper headlines as ‘Chairman Dan’, Mr Andrews is a tabloid symbol of gaol warden, spoilsport and aspiring dictator for having the hide to legislate a necessary pandemic bill. The Murdoch campaign generates vitriol reminiscent of that generated by Fox News viewers in the U.S., so much so that that the belligerent activities of the state’s small but noisy rump of anti-vaxxers, neo-nazis and assorted “truth-tellers” and “freedom fighters” forced the cancellation of a recent press conference by the Premier on security grounds.

By contrast, the PM spoke glowingly at a press conference about the wonders of his newly minted policies on electric vehicles despite having said in 2019 that Labor’s adoption of the technology would mean the end of the weekend because EVs would not be able to tow your boat or pull your trailer. In an appeal to tradies, a Morrison target voter group, it would also spell the end of the ute.

Watching the PM contradict everything he said in 2019 on the subject and angrily denying he ever said it, it’s not hard to see where Macron was coming from in saying Morrison lied to him.

On Twitter, Amy Remeikis summed up the farcical press briefing with:

‘Wonderful how when you don’t believe anything you say, you can just say anything.’

And that’s pretty much where it stands with Mr Morrison. He only has eyes for the prize and he’s now so deep in pursuit of it that there’s no going back, so he’s saying anything at all that might swing a few votes. It’s how it was with cancelling the French contract. Only a leader who feels free to say anything without contradiction could say that Australia had to pull out of the deal with the world’s premier producer of nuclear propulsion submarines by claiming we wanted subs powered by nuclear propulsion.

If that were really the explanation, we would have stayed with the French and produced the subs in Adelaide using low-grade uranium. In the unlikely event that AUKUS ever materialises, it will require production to happen in the U.S. or Britain using weapons-grade uranium, with the consequential loss of Australian sovereignty and South Australian jobs.

Apart from reliance on polls, election strategists also find solace in reliance on axioms. One of the most common is that opposition parties don’t win elections, governments lose them. That said, while there is good reason for concluding that the Morrison Government has done everything possible to lose the 2022 Election, there is an open question as to whether Labor has done enough to win.

In playing the game of small target, Labor has repeatedly sold out many principles dear to the hearts of true believers in order to avoid being wedged. It’s particularly true of anything to do with legislation that can be characterised as national security but it’s also true of tax cuts that will be good for wealthy L-NP donors.

Mindful that the post-GFC 2010 national debt was a mere $191 billion under Labor, then Treasurer Wayne Swan was pilloried by Tony Abbott and the Murdoch media as a debt and deficit train wreck. The Coalition national debt before the pandemic had risen to $561 billion and now stands at $834 billion, with $923 billion projected by June 2022.

Proposing tax cuts in those circumstances has little justification by any standards, yet Treasurer Josh Frydenberg proposed them and Labor signalled its intention to wave them though, as it does with just about everything.

Unlike the United States, Australia’s electoral laws require citizens to present at a polling booth. Most vote while they are there, even if they’re not interested in politics. That leads to another axiom that Labor needs to take seriously and it has to do with elections in Australia being decided by a large cohort of uninformed voters. It’s reasonable to assume that disengaged voters would be likely to vote for a name they recognise.

Taking party leaders as they stand, Scott Morrison is going to win the vast majority of those votes. Not only does he appear constantly on television screens and news outlets, but he also projects energy and dynamism, even if he is shouty to a fault and making it up as he goes along. By contrast, it’s safe to say a great proportion of voters who don’t follow politics would not know who Anthony Albanese is, much less what he stands for as Labor leader.

Labor has an impressive team of shadow ministers, any one of whom could take the helm and present the alternative governing party as principled and dynamic. I would place former New South Wales Premier Kristina Keneally at the top of that list. Bill Hayden resigned as Labor leader in 1983 on the eve of an election when it was put him that the Party needed a more certain winner. Bob Hawke was installed and won a resounding victory. Even though Hayden might have been right in saying that a drover’s dog would have won the 1983 Election, Labor was right to improve its chances with the more recognised and energetic figure of Hawke.

Neither the shifting opinion polls nor competing election axioms point to a Labor win as things stand. Like Bill Hayden, Albanese is a decent man but there is a strong argument for him to willingly stand aside for a safer option.